We didn't mean to go to Oktoberfest! 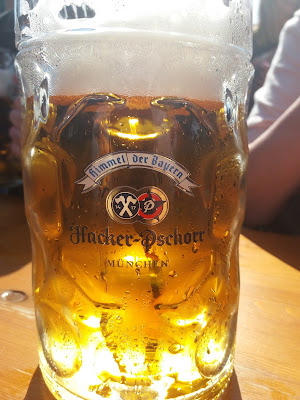 We didn’t originally plan to go to Oktoberfest, in fact it happened virtually by accident; not that many people actually believe this statement! Both family and work colleagues thought I had arranged our holiday deliberately to coincide with the "grand-daddy" of all beer festivals, and the best known and most famous event of its kind in the world. This was not the case, as I am about to point out.

When choosing our holiday, and planning the travel arrangements, I originally wanted to visit somewhere else in Germany, for what would be my fourth trip to the Federal Republic in a year. I settled on Heidelberg; a city which had all the attributes I was looking for – historic buildings, attractive setting, a good general ambience, plus some good places in which to enjoy a few beers.

The last attribute could apply to almost anywhere in Germany, but Heidelberg seemed both desirable and relatively easy to get to. My wife however, had other ideas, and expressed a strong desire to return to Regensburg; the attractive medieval city, on the banks of the River Danube, which we had visited last year. I was not averse to the idea, so being the dutiful and at times compliant husband, I agreed and set about making the travel arrangements and booking the accommodation. 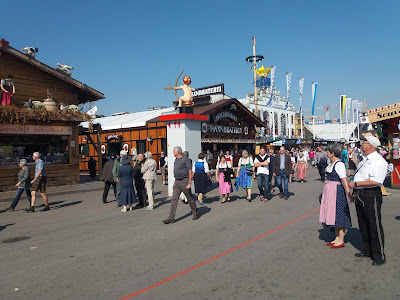 Last year we flew to Nuremberg from Stansted, using Ryan Air, and then took the train to Regensburg. There is only one flight a day in each direction and whilst this worked out well in 2016, the timings this year necessitated either a very early start, or an overnight stop. The family also expressed a wish not to fly back on a Sunday, as they wanted a day to recuperate from the holiday, before returning to work (light-weights!).

Son Matthew had left it late to book his leave, meaning we were looking at the last week in September, rather than my preferred option of the first week. This was the same week as last year, and also happened to coincide with the last week of Oktoberfest. Because of this clash I at first, deliberately steered clear of Munich as our point of entry because I thought (wrongly as it turned out) that flights and accommodation would be expensive. 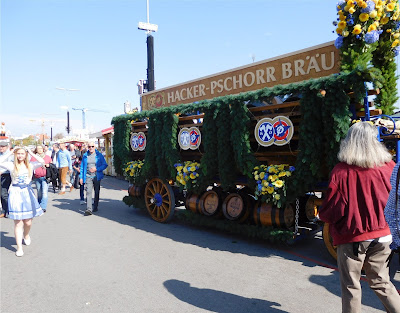 Something happened to make me change my mind, and that was Eileen having to go into work on the Monday to sort out the men’s wages and pay various contractors. She works, on a self-employed basis, for a firm of scaffolders, and is responsible for the admin and office side of the operation. She has no deputy, and although I’d suggested her sorting out these financial matters the day before, this was not practical.

Not paying the workforce was obviously out of the question, but what was possible was her going in for the morning and us to then take a flight later in the day. As it happened, there was a suitable, early-evening flight from Gatwick with Easy Jet, and what’s more it was dirt cheap. All that was needed was somewhere to stay for the night in the city. I found a decent hotel, offering rooms at a fairly reasonable rate, close to the main station. Matt’s friend had stayed there a couple of times, and we had met up with him there on our last visit to Munich,  back in February. 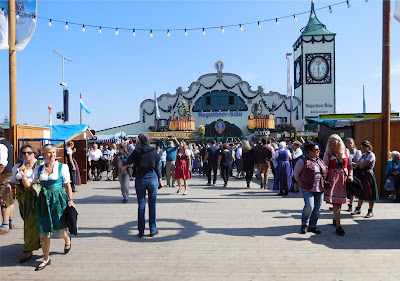 I booked us in for the night, and then booked a four night stay in Regensburg, at the same well-appointed hotel, right in the heart of the old town, where we had stayed the previous year. With a late evening flight back booked for the Saturday evening, the stage as set for three and a half days in Regensburg, sandwiched between two half days in the Bavarian capital. All that was left then was to think of something to do in Munich for late Tuesday morning/early afternoon.

I thought of a bit of sight-seeing, followed by some shopping, before rounding things off with lunch (plus a few beers at one of the city’s excellent beer-gardens). I was looking at a tram-ride out to the Englischer Garten when the brainwave struck; why not call in at Oktoberfest instead? 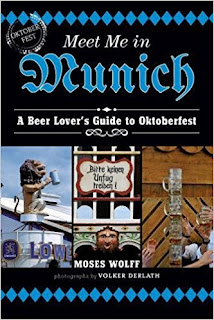 The festival site, or Theresienwiese (Wiesn), was only about 15 minutes walk from the hotel, and a similar distance from the station. We could leave our bags at the hotel and then nip along to Oktoberfest. We were in town, we were close by, it was the perfect opportunity and, as the saying goes, “It would be rude not to!”.

I spent a few weeks genning up on all things Oktoberfest, and in this I was ably assisted by the excellent “Meet me in Munich” – “A Beer Lover’s Guide to Oktoberfest”, by Moses Wolff. I cannot recommend this book highly enough for anyone contemplating a visit to Oktoberfest, as not only is it packed with just about everything you need to know, it is written with care, devotion plus just the right amount of humour, by a native of Munich, who still lives in the city and is a regular (and frequent), visitor to Oktoberfest. 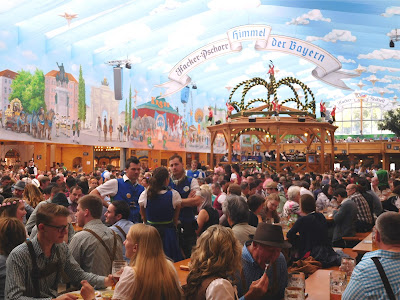 The book changed my perception of the event from something I thought of as just a glorified “piss-up”, to what it really is, namely the world’s largest folk festival, travelling fun-fair and a celebration of all things Bavarian. Of course beer features highly on the agenda,  and the event wouldn’t be Oktoberfest without it, but I soon discovered there are plenty of other things to see and do, besides necking back Maβ Krug’s of high-octane beer, and it was this which helped me sell our proposed visit to the family.

Matt  didn’t need much persuasion, although as he later confided he was pleasantly surprised to discover it was not just a crowd of mainly blokes, sitting in an enormous beer hall, swilling litre-sized mugs of beer. Eileen too enjoyed the experience and was quite taken aback to learn I hadn’t been before. “I didn’t realise you were an Oktoberfest virgin”, she told me as we wandered down to the Wiesn, “We’d better get along there quick, and lose our virginity before anyone catches on.” 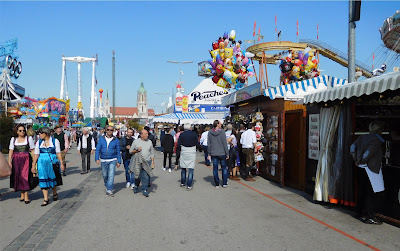 And that’s where, for the time being at least, we will leave this narrative about the world’s biggest beer festival. Next time I describe our experience of this slightly crazy, but fun-filled event, along with some useful tips and practical information for other would be first time visitors, keen to lose their “Oktoberfest virginity”.

I really enjoyed my trip to Munich a few years ago and would love to go back some day, but I've never really been drawn towards the Oktoberfest, probably because I have a mental image of North American teenagers on a gap year staggering about while swinging their steins to the compulsory oompah band or lying comatose in pools of vomit, but maybe it's possible to find a more cultured corner of the event which you'll be enlightening us about soon.

I thought the same Matt, although it was drunken antipodeans I was anxious to avoid. Our brief visit was made early in the day, so there was no signs of drunkenness, although we did see some pretty pissed-up people staggering into Munich station, when we arrived in town, the previous evening.

I think the key is to go during the week, and to go relatively early in the day. Full write ups, of our relatively brief visit, to follow.