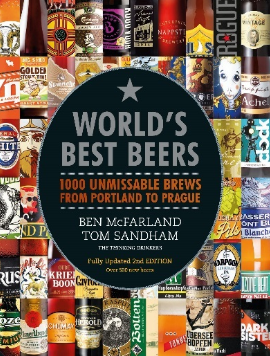 I first came across the work of Ben Mc Farland and Tom Sandham when I purchased the "Good Beer Guide to West Coast USA". Published by CAMRA in 2008, the book acted as a beacon which sparked a desire to visit California, Oregon and Washington State, and experience the amazing beer scene there. Rather tardily, I have not yet achieved this desire, but I certainly intend to.

Ben and Tom’s easy-going, but highly informative, style was one of the driving forces behind my desire to “Go West,” so after being contacted by publishers Jacqui Small and asked if I would like to review a copy of the duo’s latest title, I of course jumped at the chance.

Their new book is titled the “World’s Best Beers,” and having now had the chance to cast my eye over this handsomely illustrated, hardback book, here are a few of my thoughts.

The first point to note is the book’s sub-title of “1,000 Un-missable Brews from Portland to Prague.” With that amount of different beers to get through, Ben and Tom certainly had their work cut out. However, the pair describe themselves as “the thinking drinkers”, with a philosophy of “drinking less but drinking better”, and it is this which has enabled them to work their way through such a amazing line-up of beers, and live to tell the tale.

The second point is this is actually the second edition of this title; the first having appeared in 2009. With over 500 new beers, there has been a lot of changes, so I have to wonder which ones have fallen by the wayside.

Now down to the nitty-gritty, and the real substance of the book. As the title suggests, this is truly a global guide, so the main bulk is  divided first into continents (Europe, the Americas,  Australia & New Zealand, and finally Asia & the rest of the World), and then into countries.

All the world’s great brewing nations and their beers are described, and this is where the authors’ prowess comes into play, by selecting what they regard as the best each country/region has to offer in terms of great beers.

Each chosen beer is annotated by a photo of the relevant bottle, and sometimes by one of the beer in a glass as well. The location of the brewery concerned is given, in terms of city/town/state/area, plus a succinct write-up, which tells the reader all he or she needs to know about each beer. There are also sections on brewing, beer-styles, drinking vessels plus informative guides to storing and pouring beer, where to drink it and what to eat with it.

This latter section is particularly noteworthy as  it starts off by examining the principles behind beer and food matching, before moving on to pairings such as beer and cheese, beer and chocolate plus beer and burgers. It then looks at beer with certain types of national cuisine, including Scandinavian, Mexican and Spanish. Finally it looks at the vexed problem of what types of beer work best with desserts. 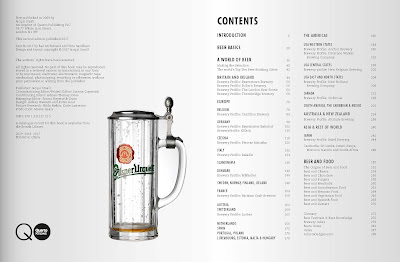 The book is broken up by a number of in-depth profiles of some of the breweries, plus some rather more obvious pages, such as introductions to each country. So is it a coffee-table book, or a serious treatise on beer?

My money is on the latter, and with 1,000 different beers to choose from, there is certainly something for everyone. I haven’t had time to check right through yet, but there are many of my own personal favourites amongst those listed. I therefore feel the book is pitched at just the  right level;  challenging and technical enough to draw in those new to the world of beer and brewing, but not so basic as to put off the real beer enthusiasts. 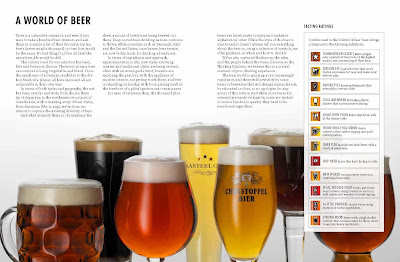 So, if I had not been sent a copy of this book to review, would I buy it? This is a difficult question to answer, as I really like it and know, that even though I've read countless books on the subject, I would still learn things from this one.

And there lies the problem; I already have shelves full of books about beer, and the £25 cover price sounds a bit steep. However, perhaps I am a little out of touch with regard to book prices, and whilst I don’t really want to be pushing business the way of a certain on-line retailing giant, I’m sure that with a little initiative, the book can be obtained for less than the published cover price. 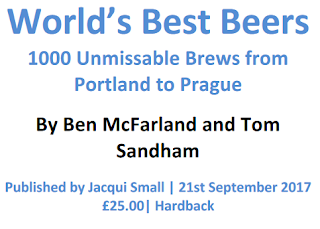 So, as I am now the proud owner of this informative guide, the question is rather immaterial. If I had not received a copy though, the “World’s Best Beers” would certainly be on my Christmas present list, and if a friend or family member had decided to buy it for me for me, then I would have been extremely grateful.

I can't say fairer than that, and if I've whetted your appetite and you fancy getting hold of a copy, the details are opposite:

Disclaimer: I was approached by the publishers Jacqui Small, and asked if I would review this book. For doing so I received a complimentary copy, but did not allow this to influence my review in any way.

I know how you feel, Paul. You reach a stage in life when you've too many books! I've been trying to give away a collection of CAMRA local guides for years, but I can't throw them away.

A book about places to drink in different countries would interest me a lot more than all the books about bottles of beer from around the world, but that's me.

Clearing out my parent's bungalow last year Martin, brought home just how much people accumulate over the course of a lifetime. Mum and dad had already done a big clear out, when they were still in reasonable health, but they carried on collecting things afterwards.

We have been equally guilty of this. We cleared our loft out, twelve years ago, when we had the house re-roofed. Boxes have slowly been finding their way back up there, because it’s the “easy solution”, and out of sight is out of mind. The sensible thing to do, is sort things out before even contemplating sticking them up in the loft – but that takes effort at the start!

"the “World’s Best Beers” would certainly be on my Christmas present list, and if a friend or family member had decided to buy it for me for me, then I would have been extremely grateful."

My thoughts exactly. At this stage in my "cluttered" life there is nothing I really need in the way of materialistic goods. But, it gives my wife a great idea of what to get me for Christmas. Not sure if it's made it to this side of the pond but I'll keep an eye out.