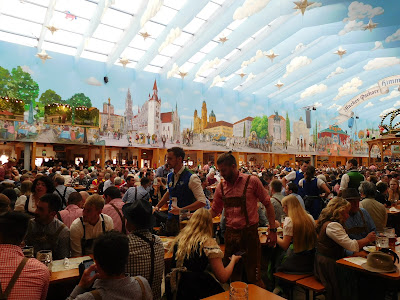 So, in the early hours of this morning, the family and I arrived back safely from our trip to Bavaria, having escaped from the city of Munich which, yesterday, seemed completely over-run with Oktoberfest revellers.

By way of  contrast, the sedate, medieval city of Regensburg, with its ancient, winding cobbled streets and splendid situation on the banks of the Danube, provided the perfect setting for some much needed rest and relaxation, plus the odd spot of beer sampling, of course. 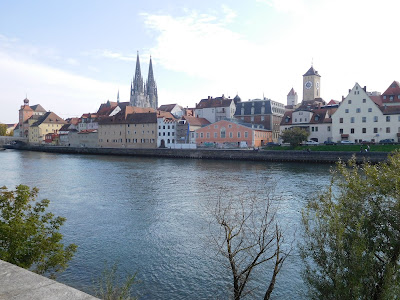 We made a fleeting visit to Oktoberfest (it would have been rude not to!), on the first full day of the holiday, before travelling on to Regensburg, and arriving early (shortly before midday), is obviously the best thing to do; especially if you want to avoid the crowds!

A full report will follow in due course, but in general we all thoroughly enjoyed our brief visit; even the non-beer drinking Mrs PBT’s. With some really scary fairground rides (we chickened out of course!), some good old-fashioned side shows (haunted houses, shooting galleries), plus enough food stalls to feed an army, there was plenty to keep everyone amused. We all bought silly hats, and came away pleased to regard ourselves as no-longer “Oktoberfest virgins!” 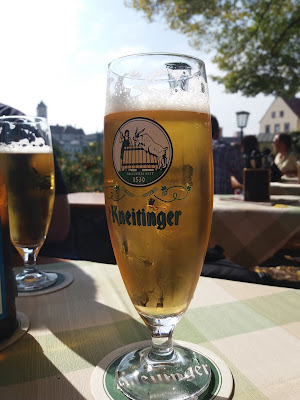 Strong 6% Festbiers, served only in one litre Maβ Krugs, might be fine for the 3 million odd visitors who flock each year, to Oktoberfest, but for those of us in search of gentler pursuits, Regensburg was fine. Apart from the recently re-established Thurn und Taxis Brewery and the Regensburger Weissbräuhaus, we sampled beers from the city’s main breweries of Bishofshof, Kneitinger and Spital, alongside “imports” from other parts of Bavaria.

In fact exploring the maze of back streets and alleyways in the heart to the old town, gives chance for the “beer-hunter” to stumble upon often totally unknown breweries; such is the appeal of this ancient and attractive city. For example, the Italian restaurant, next to our hotel, served beer from Erl Bräu, who are based in Geiselhöring to the south-east of Regensburg, and Kuchlbauer beers were also quite common. The latter are primarily a wheat-beer brewery from Abensberg; a small town to the south east of the city. 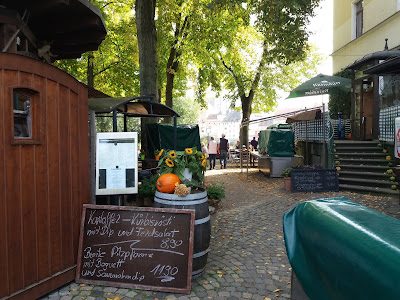 However, it wasn't just a case of ticking off unusual beers, as the highlight, for me was discovering Alte Linde, a lovely old pub set on what is essentially an island in the Danube, with an equally fine beer garden to match. Smaller, and more intimate that the much better known Spital-Brauerei, just across the other arm of the river. With Kneitinger beer, and good, well-priced food, Alte Lind was, for us all, well worth stumbling upon.

So lots of detail to follow, and much to interest both beer and travel enthusiasts alike.

"plus the odd spot of beer sampling, of course."
Heh :)

"gives chance for the “beer-hunter” to stumble upon often totally unknown breweries"
Well done on the "beer-hunter" bit.

The Alte Linde looks like a marvelous place. Did you know of it before hand or find out whilst there or just happened upon it?

PS - As for Oktoberfest, once is definitely enough (mainly for the experience). Did it back in 1980 (a lot younger then of course!). Nowadays I'd opt for something like the Alte Linde instead. :)

Hi Russ, I did actually check out the Alte Linde beforehand, and liking what I saw gave it a go. We were lucky with the weather and sat outside, but my wife and I had a look around inside, when we popped in to use the toilets.

We all enjoyed Oktoberfest. Our son thought it would just be a large hall, full of people drinking, so he was surprised at what else there was, plus the number of tents (halls really!). We actually sat out in the beer garden, at the Hacker-Festzelt. They wouldn't let us in because we were carrying bottles of water, although I did pop in on my own afterwards, to take some photos.

I really enjoyed the event, and having broken my duck and knowing how it works, I would like to go again. Nothing against the family, but going with a group of friends and visiting two or three of the tents would be a better proposition, but definitely not at a weekend!

It would also make sense to stay out of town, and travel in using Munch's excellent public transport system.

"I would like to go again. Nothing against the family, but going with a group of friends and visiting two or three of the tents would be a better proposition, but definitely not at a weekend!"
and;
"It would also make sense to stay out of town, and travel in using Munch's excellent public transport system."

I heartily concur with all of the points above. :)