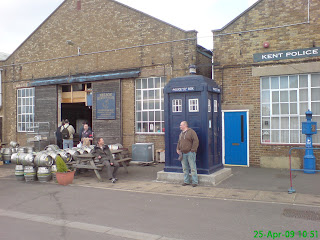 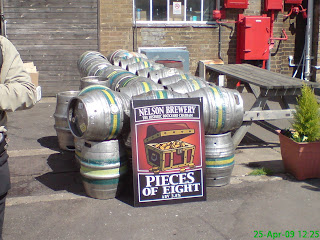 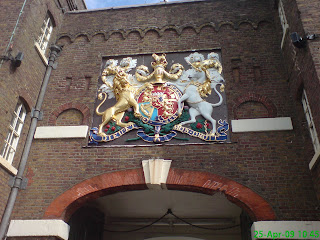 Last Saturday, along with 15 fellow local CAMRA branch members, I visited Nelson Brewery in Chatham. I’m not going to write too much here about the brewery, as there isn’t that much to write about. Suffice to say that Nelson are based in the Historic Former Naval Dockyard in the town and have been brewing since 1995.

The company started life as the Flagship brewery (Nelson’s flagship at the Battle of Trafalgar was, of course HMS Victory, and Victory was constructed at Chatham), but changed its name to Nelson in 2004 following a change in ownership. The current owners PiersMacDonald, and his partner Val, acquired the business in 2006, and since then have re-vamped some of the beers and have tweaked the recipes of others to ensure a more consistentproduct. No brewing sugars are used in the beers, and only the finest pale malt, produced in a traditional floor-maltings at Warminster, together with whole-leaf hops are used to brew the beers. All the Nelson beers have a naval theme to them, with names like Powder Monkey, Dog Watch Stout, England Expects, plus probably their best known beer Friggin in the Riggin.

There is never that much to see when visiting a micro-brewery and Nelson was no exception.The brewery is housed in one of the former workshops of this sprawling site. To say that the brewery looked rather chaotic would be an understatement, but Piers explained he was in the process of moving things around inside to allow the installation of a recently acquired 10-barrel plant, which will double the size of the brewery. His problem at the moment is finding the time to install this new equipment, as he is currently brewing flat out in order to keep up with the demand for his beers

Piers talked us through the brewing process, with particular emphasis on how Nelson brew their beers, and Val then explained about the importance of bottled beer to the company. She should know as she personally fills and caps each bottle by hand, and what’s more she hand labels them as well! Bottled beers account for some 20% of Nelson’s trade, with ASDA taking the lion’s share.

I am not quite certain of the time we left the brewery, but before we departed we were each presented with a souvenir glass. The rest of the day was spent visiting a few local hostelries - more about that in a later post!
Posted by Paul Bailey at 20:57 No comments:

Apart from last weekend I haven't managed to sample that many of the Beer Festival offerings at our local Wetherspoons. I popped in quite early last Saturday and typically, seeing as I needed to drive later on that day, there were several beers that I would have liked to have tried. These included Wild Blue Yonder from Oregon, Palm Steenbrugge Blond from Belgium and Sinebrychoff Porter from Finland.

I risked a half of the latter with the aim of popping back in the early evening. Unfortunately, this plan never quite materialised, and it wasn't until the following day that I was able to re-visit. Even more unfortunately, all three of the aforementioned beers had sold out, and the selection that Sunday included a few too many fruit-flavoured offerings for my liking. Perhaps it is just me, but I feel that we don't quite get these beers right here in the UK. Having said that whilst I may have the occasional Belgian Kriek or Framozen they are not the sort of beers I wish to drink a lot of.

I therefore gave the Sharps Red Sloe Ale and the Caledonian Raspberry Fool a miss. The Brains Dark and the St Peters Golden Ale were both good though, and it was nice to be able to sit outside and drink them. A glass of the Sinebrychoff Porter would have been really nice to finish up on, but I can perhaps understand the pub's management wanting to put some of the more exotic beers on for the Saturday. I just hope they weren't wasted on the Fosters-swilling crowd that frequents our Wetherspoons later on in the evening.

I'm off to visit Nelson Brewery at Chatham, this Saturday, along with other members of West Kent CAMRA. We'll possibly end up at a Wetherspons somewhere, I just hope there's some Sinebrychoff and Wild Blue Yonder on sale!
Posted by Paul Bailey at 21:33 1 comment: 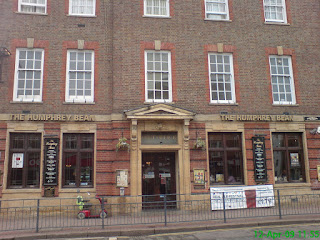 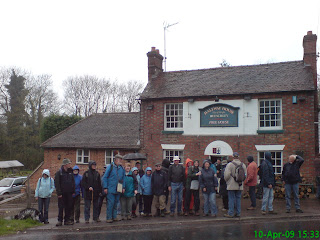 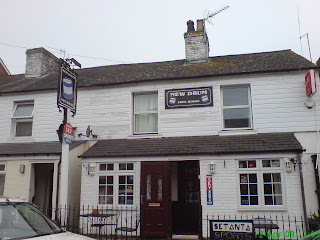 Now that the long weekend is nearly over I hope everyone reading this had a good Easter.

Mine was pretty good. I actually had five days away from work, as I took Maundy Thursday off in order to get my car serviced and M.O.T.'d. That all went smoothly, with no nasty surprises, so afterwards, by way of a small celebration, I met up with a friend for a couple of pints of Harveys in the New Drum.

Good Friday saw myself, plus several other members of West Kent CAMRA joining the ramble organised by Maidstone & Mid-Kent branch. We enjoyed a very pleasant seven and a half mile walk through the Kent countryside, stopping for an extended lunchtime session at former West Kent Pub of the Year, the Halfway House at Brenchley. Thirty-five walkers, plus one dog turned up, and the rain held off until the return leg of the journey. For a more detailed description of the walk click this link.

Saturday was a bit of a non-descript sort of day. I enjoyed a lay-in, then spent a bit of time out in the garden. Later on I made a few phone calls in order to sort out the accommodation for the walk along the South Downs Way that a friend and will be undertaking next month. We will be walking the middle section from Clayton to Petersfield, having done the section from Eastbourne to Clayton last year. We are both hoping for better luck with the weather, as we got absolutely drenched last time; there is not a lot of shelter on top of Firle Beacon! It goes without saying that we will be visiting the odd public house or two en route, especially in the evenings, and I must say I am really looking forward to the four days walking as well.

Easter Sunday saw me getting the bike out for the first time this year. I enjoy cycling, but am a bit of a "fair-weather rider", locking the bike away in the shed during the winter. After giving the machine a good oil, I rode down to the local supermarket filling station and pumped the tyres up (40 psi takes some doing with a foot pump, so I am quite happy to cheat). I rode through the sports ground and picked up the cycleway that leads to Haysden Country Park. We are fortunate to have this local authority maintained amenity in Tonbridge, and having ridden around the lake I carried on along the off-road cycleway towards Penshurt. I only cycled as far as the road into Leigh though, deciding to carry on into the village itself and then return via what are known as the Powdermills.

As the name suggests, Leigh Powdermills were used for the manufacture of gunpowder. They were supplied by barge along the River Medway, and produced much of the powder that was used by Wellington's forces at the battle of Waterloo. There is precious little left of the mills now, and multi-national pharmaceutical giant, Glax0-Smith-Klein now occupy the site. As I rode into Leigh I was quite tempted to stop for a pint of Larkins at the Bat & Ball, one of two pubs in the village itself (there is also the Plough at Powdermills, so Leigh is quite a good place for a mini pub-crawl). However, I had some Wetherspoons vouchers in my pocket and with these I could get two pints for the same price as one in the Bat, so I carried on along the tar-mac path that leads back to the cycle-way and eventually into Tonbridge. Despite the rather dull and over-cast conditions, there were quite a few people enjoying a stroll around the sportsground, and having cycled the best part of eight or nine miles I too felt good about being out in the fresh air and getting some unaccustomed exercise. I did feel ready for a pint though!

Our local Wetherspoons, the Humphrey Bean is Tonbridge's former Crown Post Office, and whilst the front of the building is quite distinct, the much larger section at the rear used to be the sorting office and thus in effect is a large shed. Wetherspoons design team have done a reasonable job on the place though, and the Humphrey Bean is a popular watering hole for the towns people. I chained my bike up to the railings outside and nipped inside. I managed to get served, and much to my pleasure secured a pint of one of the beers that will be on sale during the forthcoming International Real Ale Festival - Lead Dog Ale from the Yukon Brewing Co in Canada.

I sat out in the garden enjoying this dark flavoursome ale, but limited myself to the one as I knew there was a roast dinner waiting for me at home. There was also some more work in the garden that needed doing.

Today, Easter Monday is my birthday. I had a quiet family celebration. My son was working and so was my wife - she is self-employed and works from home. I carried on with digging out the base for our summerhouse and made some good progress. The sun even came out in the afternoon! When it was getting near the time to collect my son from work, I nipped into Wetherspoons again. The Lead Dog Ale was still on sale, so like before I sat out in the pub's garden enjoying my pint.

Tomorrow it's back to work. It's been a good Easter break.
Posted by Paul Bailey at 20:07 No comments: