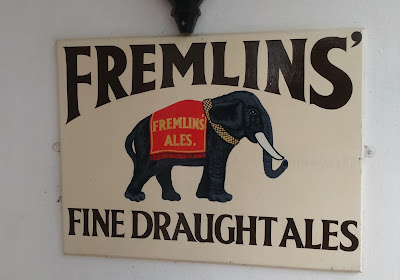 I was prompted to resurrect this article, which I first wrote some time ago. It appeared, in part, in the “Gateway to Kent Pub Guide”, produced by my local West Kent Branch of CAMRA, in conjunction with the neighbouring Maidstone and Gravesend branches. It concerns Fremlins of Maidstone who, in their heyday were the largest of the breweries in Kent.

The story begins in 1861, when Ralph Fremlin acquired an almost derelict brewery, in Earl Street Maidstone, from the executors of Mr John Heathorn. Ralph was a deeply religious man and his beers were produced for the family trade only. This was because his principles ruled out the purchase of public houses. Ralph Fremlin became a pioneer in the supply of beers in bottles and gallon jars, and the brewery's range of products was remarkable. 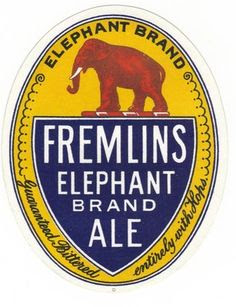 Fremlins main product was pale ale which became an increasingly popular drink, as public demand changed away from the dark porter style beer, and in order to facilitate the sale of the company’s beers, branch offices were opened in London and other towns in the South-east of England. By 1881 Fremlins had stores in London, Brighton, Rochester, Hastings and Guilford, and had a workforce stood of over one hundred including eight coopers.

New up-to-date premises were built in 1883 and a few years later Fremlins began supplying pale ale to the Courage brewery in London, becoming one of the largest brewers of pale ale in the country. From the 1890`s the firm were also brewing lager and this became a success in its own right.

In the mid 1920’s the company, which was now known as Fremlin Brothers Ltd, started to acquire its own public houses. This began with the lease of the tied estate of Leney & Company of Dover and Flint & Company of Canterbury. This was followed by the acquisition of their Maidstone neighbours, Isherwood, Foster & Stacey in 1929.

Fremlins then cast their net further afield, taking over Adams' Brewery in Halstead, Essex in 1939 and Harris, Browne's Hadley Brewery at Barnet a year earlier. Their biggest acquisition though occurred in 1949, when they purchased Faversham-based George Beer & Rigden, and adopted the company’s slogan of “Kent’s Best”. The former Rigden brewery in Faversham was closed in 1954, with all brewing taking place in Maidstone, but the plant reopened in 1961 to meet increasing demand.

In 1960,  following a deal with Whitbread, Fremlins started supplying the 189 pubs belonging to Frederick Leney & Sons of Wateringbury, although Whitbread remained in control of  the Wateringbury brewery. 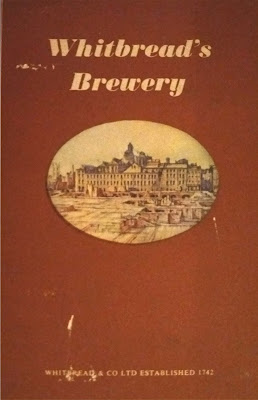 The Fremlins elephant  lost its freedom seven years later, when Whitbread bought the business with its 800 or so licensed properties. Fremlins, in common with many other regional breweries, had gone in under the “Whitbread Umbrella”; the organisation set up by Whitbread to offer security and protection from takeover. In 1967, Whitbread acquired a controlling role, and the company assumed the title of Whitbread Fremlins.

Whitbread had began a policy of association with local and regional brewers ‑ the so‑called "umbrella" policy, a decade or so earlier. Under this arrangement companies concerned about the possibility of take‑over became associates by offering Whitbread a minority share-holding (usually between 25 and 35 per cent). Whitbread were normally asked to nominate a representative to sit on the company's board, and in return for the protection offered, together with technical and marketing advice, the company agreed to stock certain Whitbread products, notably bottled beers.
Having to stock Whitbread bottled beers had an immediate effect on Fremlins own range of bottles which, at the time of the takeover numbered nine bottled beers. The range of draught beers was also cut back (more on that later), although for a while things continued much as they were before.

It therefore came as a bit of a shock when, in 1972 the closure of the Pale Ale Brewery in Maidstone was announced, along with the transfer of all brewing operations to the former George Beer & Rigden Brewery in Faversham. The reasons behind this decision were unclear, but in his autobiographical account of his fifty years at Fremlins, entitled “Under the Elephant”, former brewery worker, Percy Jeffrey writes that the original plan had been to re-build the Maidstone brewery. This was later cancelled in favour of transferring brewing to Faversham.

In 1977, the brew-house and much of the infrastructure connecting the Pale Ale Brewery to the River Medway, was demolished, in order to construct the A229 diversion around Maidstone town centre, along with the new St Peter's Bridge. Then in 1981, the fermenting block; the remaining sizeable building, was demolished.
I was living in the town at the time, and was saddened to witness the demolition work in progress, as the Pale Ale Brewery was, to my mind at least, an attractive late Victorian building. A modern distribution warehouse occupied the site for a while, but his too was pulled down to make way for a shopping mall known, somewhat ironically, as Fremlin Walk.

At the same time as the transfer of brewing to Faversham the range of Fremlins beers was drastically cut back. Most of the bottled beers disappeared, as did virtually all the draught beers. The latter were replaced by Whitbread Trophy. The idea behind Trophy was that it was varied from region to region, supposedly being brewed to suit local tastes and palates. The Trophy produced at Faversham, for example, was loosely based on the former Fremlins Three Star Bitter. 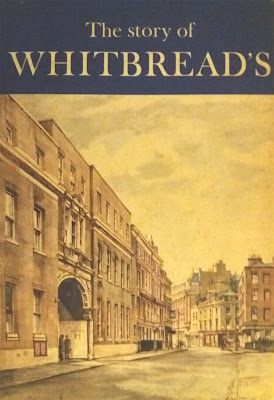 In its heyday though, Faversham-brewed Trophy was an excellent beer; the phrase “well-balanced” springs to mind, but would not really have done the beer justice. On form it was one of the finest session beers around. I remember knocking back eight pints of it in the village local one night, and feeling as right as rain the next day!

I spent the years 1974-1979 living away from Kent; initially as a student in Greater Manchester, and after that living and working in London. When I returned to the county I was pleased to discover that Whitbread had re-styled their Faversham-brewed Trophy as Fremlins Bitter, in an effort to promote a more local image. Pubs were re-painted in Fremlins livery, and the famous Elephant trademark was brought back. Finally a new stronger beer called Fremlins Tusker (named after the elephant) was introduced to compliment the bitter.

Tusker was a superb beer, being full-bodied and malty, yet well-hopped at the same time.  Unfortunately sales did not live up to expectations. A combination of high-pricing, a recession, plus resistance to strong beers from consumers, especially in rural areas where it was often necessary to drive to the pub, led to slow turnover of the beer in many outlets. This in turn led to poor quality beer and hence even slower turnover. Tusker became increasingly more difficult to find, especially in good condition. Eventually the beer was discontinued, barely five years after its launch. 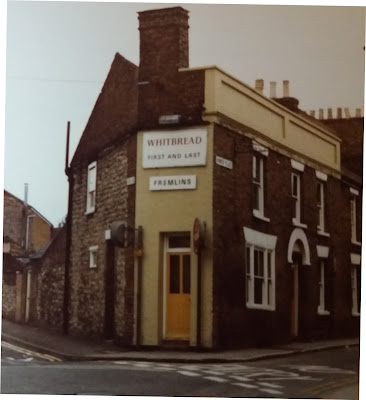 A few years later, Fremlins Bitter also went through a bad patch. The brewery blamed the brewing water, but eventually the problem turned out to be one of yeast infection. By the time the problem had been sorted out, the beer had become a shadow of its former self. Things got so bad that at one stage most Kent drinkers, myself included, refused to touch it.

In 1991 the closure of the Faversham Brewery was announced. The reasons trotted out, by Whitbread, at the time were the usual big-brewery double-speak, and probably had more to do with the property value of the quite substantial town-centre site, than anything else. Once again I felt extremely saddened by this act of corporate vandalism, especially as I had been privileged to have toured the brewery twice. On both occasions I had seen for myself what an interesting place it was, with some very traditional brewing plant and equipment.

The closure of the Faversham Brewery not only deprived Kentish drinkers of a favourite local brew, but also brought to an end Whitbread’s own direct involvement with the county’s brewing industry. For Fremlins, the closure marked the final chapter in a history that began during the latter half of the nineteenth Century and which at one time, saw them achieve the distinction of being Kent’s Premier Brewers. 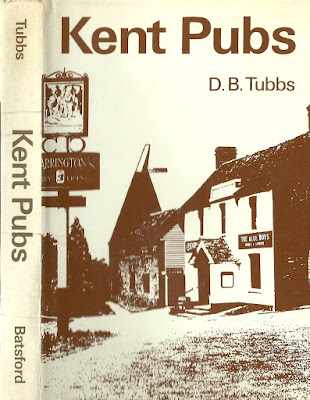 The brewing of Fremlins Bitter was initially transferred to Cheltenham, and then to the former Nimmo’s brewery at Castle Eden, County Durham. During the latter half of 1997, the brand was dropped altogether, along with a number of other “local” Whitbread beers. The beer that was promoted as “A part of Kent life” was thus no more.

It is one of my biggest regrets that I never managed to sample the original Maidstone-brewed Fremlins beers. The 1972 closure of the brewery took place at a time when although I was becoming more appreciative of what constituted a decent pint, I still had much to learn about beer and brewing. I have talked to several older drinkers, all of whom remember Fremlins. Some even remember County Ale.

According to a guide to Kent Pubs, published in 1966, as well as Three Star Bitter, Fremlins produced an ordinary bitter, a mild, a Four Star Bitter, plus the revered County Ale. This was a strong beer which surely would have given its namesake from Ruddles a good run for its money!

Fremlins County Ale did continue as a bottled beer for some years after the closure of Maidstone, but according to one local report was produced in Portsmouth. This hardly made it worthy of the title “Kent’s Best” - the advertising slogan  Fremlins inherited, along with the brand, from George Beer & Rigden, the former owners of the Faversham brewery.

Interesting piece. I remember those belts with a string of pump clips in Whitbread pubs in the early 90s, I guess the Fremlins was produced in Castle Eden even then. Mind you, Castle Eden beers got me into real ale back then.

As to property values and town centres and whatnot, all I can bloody do is sigh and shake my head. 😒

I read this interesting blog a while ago, but never got around to asking this question.... When was the period you refer to when Fremlins had the yeast problem? Cheers

Last week, while planting in my garden in Brighton in our home which we have lived in since 1985, I dug up a Fremlin's beer bottle stopper!

Where can I find a list of coopers who worked for them in about 1911.