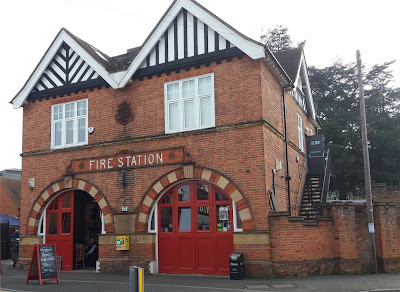 Tucked away in the maze of streets behind Tonbridge’s imposing 13th Century castle, the Old Fire Station saw its last fire engine depart back in 1986, when the Fire & Rescue Service moved to a modern and purpose-built facility on the town’s industrial estate. After standing empty for three decades, and following extensive renovation work, the iconic building was given a new lease of life.

Two years ago, virtually to the day, the sensitively restored building opened its doors for the first time, and launched itself as the town's pop-up and event space. Since that day back in 2015, the venue has hosted various events, including fine dining evenings, its own cider festival and numerous “tap-takeovers.” 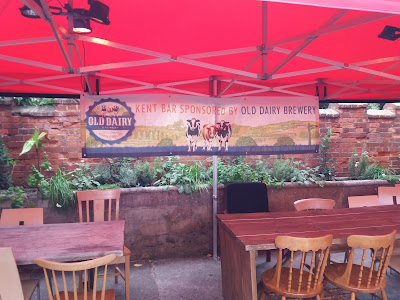 Rather fittingly Tonbridge Old Fire Station (TOFS), played host to Old Dairy Brewery this weekend, for a “tap-takeover” which showcased the best of the brewery’s beers. Friday evening was also a friend’s birthday, so half-dozen or so of us met up in the ground floor bar to help him celebrate.

A number of Old Dairy beers are on regular sale at TOFS, but in keg form only. On this occasion the brewery’s cask ales were highlighted alongside offerings from Old Dairy’s “craft range.” The latter beers have recently been launched under the name of the “Cattle-Shed Brewery,” a move which could be viewed as either a clever marketing trick, or just jumping on the craft-beer band wagon. 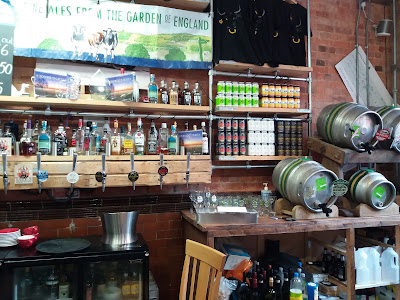 I stuck with cask, especially as Old Dairy had brought along three of their “Green Hop” ales. I was keen to get stuck into the latter, as having been away for the first half of “Kent Green-Hop Fortnight,” and also not attending this year’s Canterbury Food & Drink Festival – where virtually all of Kent’s Green-Hop Ales are exhibited, I felt I had missed out on my “Green Hop” fix.

There were two beers brewed at 4.0%, plus an additional one at 6.5%. All were brewed to showcase a particular variety of hop. I started with the Challenger, before moving onto the slightly more “earthy” Bullion. Both were really good, well-balanced as well as refreshing. They certainly slipped down a treat.

The bar area was relatively crowded, with the sort of discerning people one has begun to expect at these events, and most were getting stuck into the excellent beers. The majority of our party had arrived earlier than me, so they’d been able to grab a table. It was good to catch up with friends, and to swap tales of recent holidays as well as discussing arrangements for the forthcoming Spa Valley Railway Beer Festival; an event most of us are involved with in one form or another. 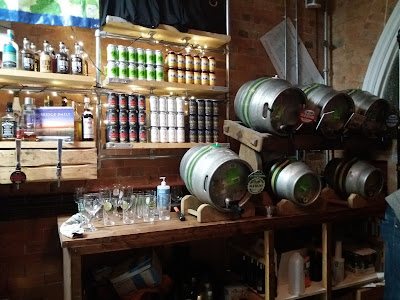 After two very good pints of hoppy, resinous beer it was time to move onto the Green Horn IPA. At 6.5% it was perhaps a little risky going for a full pint, but I was glad I did, as the beer was excellent. It was well-hopped and this was balanced by sweet, chewy malt, combined with thick resinous hop oils which coated the inside of the mouth. Priced, like all the beers, at £3.50 a pint or £2 a half, this superb Green Hop beer represented real value for money.

As mentioned earlier I stuck with the cask, and that was the advice a couple of my friends said they would pass on to Old Dairy. There was a feeling that whilst the brewery “do” cask extremely well, the same could not be said of their Cattle-Shed range. I didn’t try any of them, so can't really comment, but it might be that the brewery are still finding their feet when it comes to "craft-beer". 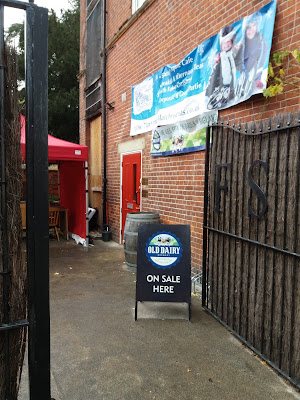 Towards the end of the evening,  most of our group drifted off to Fuggles. Two of us stayed though, thinking that Fuggles would be crowded and noisy. We both had things we wanted to do the following morning, so we wisely decided that one more beer at TOFS would be a better idea than several more strong ones at Fuggles. I restricted myself to a half of that old favourite from Old Dairy, the 4.8% Blue Top IPA.

I called back to the Old Fire Station briefly this afternoon, primarily because I wanted to take some photos in daylight, but also to grab a rather nice cup of coffee. Mid-afternoon, the place was rather quiet, but I suspect things will lived up this evening.

The “tap takeover” ends later tonight and I’m sure it has been a great success for both “oldies.” We can no doubt look forward to many similar events; such is the beauty and appeal of this flexible "pop-up" and event space.

You did well to go for the strong pint, Paul; beer always tastes better in a pint glass, particularly at that price !

I really took to Old Dairy beers as well when they started cropping up in top free houses like your local Windmill 5 or so years ago. As is often the case, as they reach a wider audience they find some licensees taking less care and putting too many beers on, which is a shame for the brewery.

Do the green hop ales use strictly Kent hops (Goldings etc.) or is it open to any green hop from the UK?

Is the Spa Valley Railway Beer Festival similar to the Rail Ale Trails around Sheffield? (that's what I first thought of reading this)

And I agree with RM re: pint glass for beer (except maybe when it comes to Imperial Stouts). :)

I first came across Old Dairy beers Martin, at the wonderfully unspoilt Red Lion at Snargate (aka. Doris’s). This was back in 2010 and shamefully, was probably the last time I visited the pub.

Old Dairy brew some good seasonal beers as well, all with a “dairy/cattle” theme,. As I said, the jury’s still out on their “craft” range, and I will pronounce my verdict, once I’ve sampled a few.

Russ, the hops which go into a “Green-Hop” ale need to be used within 12 hours of harvesting; otherwise they start to deteriorate. It therefore makes sense to source them as locally as possible. For Kent Green Hopped beers, the hops must be grown in Kent, which again makes sense as the county still grows around 50% of the total UK requirement.

The Spa Valley Railway is a preserved “Heritage Railway” running along tracks which were closed in 1985. The line operates between Tunbridge Wells West and Eridge, where it connects with mainline services..

The festival is an annual event, primarily designed to raise funds for the railway. Beers are available at SVR’s headquarters at Tunbridge Wells, and also at Groombridge and Eridge stations, along the line.

Visitors can purchase a ticket which allows them to travel up and down the line, visiting the other stations, and sampling the beers there. Beers are also available on the trains (in the dining cars). Alternatively, people can just visit Tunbridge Wells, where the main bulk of the beers available and admission is free.

This year’s event is happening in a fortnight’s time, providing everyone gets their act together!