Three go to Oktoberfest - Part One 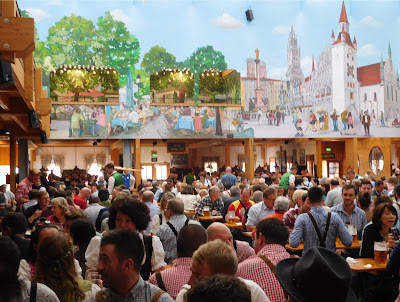 In my last post I wrote about the series of events which led to us attending our first Oktoberfest; serendipity; if you like! Here, I want to offer some tips and advice for “first timers”; small things which we picked up on which would make future visits that little bit more enjoyable, and as stress free as possible.

This is going to be quite a lengthy article, so for those with short attention spans, or just better things to do with their time, I have divided it into two. Here is Part One.

Let’s kick off with Oktoberfest itself. The story of how the event came into being is well-documented, and can easily be found both online, and in various books. Moses Wolff’s excellent “Meet me in Munich”, which I referred to in the previous article, is a must for anyone seriously contemplating a visit to Oktoberfest. 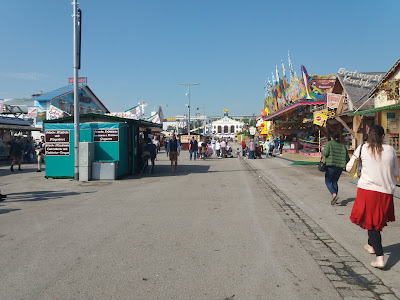 This particularly applies to those contemplating a visit either with a small group of friends or, as we did, as a family. There are various travel companies who organise trips for larger groups, and these will normally offer the complete package of flights, accommodation and meals. If, like me, you prefer to do your own thing, then the process is quite straight forward, particularly with a little planning and the sort of advice I am about to reveal.

First, the event is free. Obviously you will have to buy your beer and food, but unlike most British beer festivals, there is no admission charge. The costs involved in providing the “temporary” infra-structure”, paying the staff and the all the other ancillary charges involved in putting on this mammoth festival, are recouped  by the price of the beer (and to a lesser extent the food). 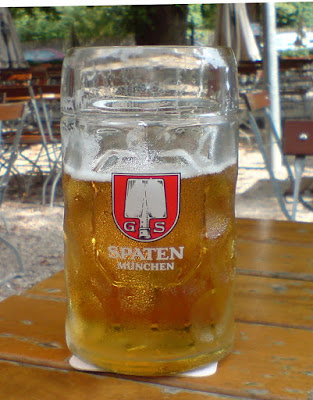 This year a litre, or Maβ of beer cost €10.80. This equates, at current exchange rates, to just over £5.40 a pint. Expensive you might think, but you are getting a specially-brewed Festbier which is around 6% ABV, waitress service – all those good-looking Frauleins in their traditional Dirndls, bringing armfuls of beer to your table are definitely worth the additional cost, plus the atmosphere, camaraderie and general ambience of the whole event.

Second, there is a lot more to the event than the drinking of copious amounts of beer. We enjoyed just walking around, looking at the stalls selling snacks and souvenirs, the various side-shows, shooting galleries plus other fairground attractions.

We personally steered away from the latter, as none of us enjoy being spun round at high speed, turned upside down or dropped from a great height, but if this sort of thing floats your boat, then do give the rides a try – preferably before you’ve had a skinful of beer and a roast pork knuckle! 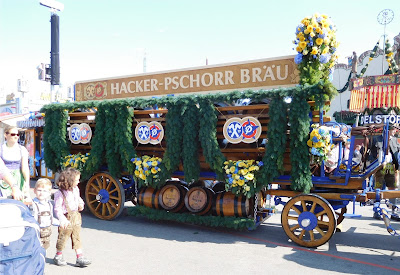 Don’t turn up expecting a CAMRA-style beer festival, with dozens, if not hundreds of different beers on sale. The only brewers allowed to serve their beers at Oktoberfest are those within the city limits. This effectively means just six brewers are represented, and these are Augustiner, Hacker-Pschorr, Hofbräu, Löwenbräu, Paulaner and Spaten.

Even here there are tie ups as Hacker-Pschorr are part of the same group as Paulaner, and the same applies to Löwenbräu and Spaten. Augustiner are still family owned, whilst Hofbräu are owned by the state of Bavaria. Other brewers have tried to get round these limitations by opening breweries within Munich, but the city council moved the goal posts by stating only those established before 1970 could supply beer to Oktoberfest.

There is also none of the samplings in half, or even third of a pint glasses, which are common place at UK beer festivals. At Oktoberfest it is litres only – as my wife found out! On the plus side there is no deposit on the glasses, so no queuing for glasses and no waiting for a refund at the end. 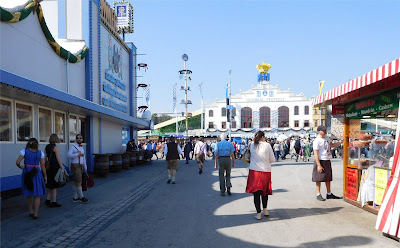 Some more practical tips now. Security has been ramped up in recent years; for obvious reasons. We were aware that rucksacks are not allowed, so we left ours back at the hotel. Large bags are also banned, but there is some obvious confusion as to what constitutes a “large bag”. Eileen certainly didn’t think her Cath Kidston handbag fell into this category, but one of the security people checking all visitors at the entrance (there are several entrances, dotted right round the site), had other ideas. This necessitated a trip to one of the baggage depositories, a €4 charge for leaving the bag and a very disgruntled wife.

"How am I supposed to carry my purse, passport, cigarette lighter etc?" Was her earnest plea. I placated her, once we were inside by purchasing a small bag, capable of accommodating all the accoutrements and other paraphernalia the female of the species normally carries around with her! The result, a happy Mrs PBT’s and a happy me!

Don't know why, I always assumed you were a veteran of Oktoberfest, Paul.
Interested to read your views, as the thought of drinking two litres of beer, however excellent, doesn't really work for me, I assume I'd prefer 3 beers in a proper Munich pub. We shall see what you thought...

As I said in one of the articles Martin, my wife thought the same. I’d made a point previously, of avoiding Oktoberfest, primarily because Munich experiences an influx of around 3 million visitors during the two weeks when the event takes place.

When it came to it, we all really enjoyed our brief visit, and I have to say Oktoberfest was nothing like as I’d imagined it would be. For me it represented the complete antithesis of a CAMRA Beer Festival; no frequent trips to the bar for yet another third of a pint; instead a litre of tasty and refreshing beer, brought direct to your table. Having “learned the ropes”, so to speak, I am tempted to go again, but probably not for a few years.

My favourite pastime in Munich though, is travelling round, visiting one or more of the city’s many beer gardens. These are quite often situated in tucked away locations, and this adds to the attraction. Obviously a fair-weather activity, but for me there is nothing finer than sitting out, under the shade of the chestnut trees, whilst enjoying a mug or two of beer, plus a snack from the self-service kiosk. Most beer gardens have the option of half litres too, which is much more sensible.

As Paul mentioned it's still free to wander around inside the grounds. But yes, definitely not the place to have a "beer" in every tent (unless you're Alan). :)

"Security has been ramped up in recent years; for obvious reasons"
Understandable. Heck, I was there during the 1980 bombing!

But, to be honest, we didn't even know about it till the next day.


Oh and as for the other locations around Munich, during Oktoberfest is, when you think about it, a good time to give them a look. We went to the Hofbrauhaus after two nights at Oktoberfest and it was practically empty.

"I was there during the 1980 bombing!" So was a friend of mine, Russ. I'd forgotten about that atrocity, until you mentioned it. I understand the bomb was placed in a litter bin, close to the main entrance - probably the one we used; which is a sobering thought.

Moving on to more pleasant matters, I agree there are plenty of other beery attractions in Munich, including its many beer gardens; as I mentioned in my reply to Martin.

ps. I can just imagine Alan having a beer in every tent!

The best quality fabric in the market specially made for a comfortable fit at a summer party! This dirndl dress with embroidered bodice is simply fantastic and feminine. The Bavarian style embroidery intricately decorates the bodice.

Visit us Our Store : https://www.lederhosenwears.com/

Such a nice information . I love your blog , You can :
Visit us our Store : https://buysteins.com/

Interesting post! Thank you for sharing them! I hope you will continue to have similar posts to share with everyone.

Totally loved your article. Looking forward to see more more from you. Meanwhile feel free to surf through my website while i give your blog a read.
men leather bomber jacket

Very Nice Information
Thanks for Sharing with us