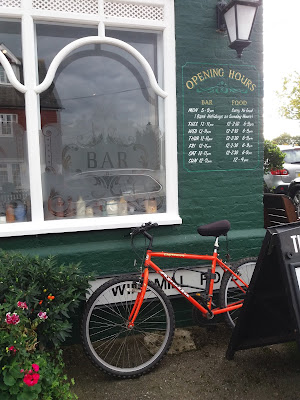 Yesterday (Sunday), I achieved a minor ambition by cycling from my home in Tonbridge, to the village of Sevenoaks Weald. Now this isn’t a particularly long ride, and neither is it that arduous.

Three and a half decades ago, I would have thought nothing of covering that sort of distance, as most weekends I regularly went for much longer cycle rides. That was when I was living in south London, and even back then there was a beer-related purpose behind jumping onto the saddle and heading off into the Surrey, or even sometimes the Kent countryside.

Cycling out to a country pub, with the possibility of a new beer on offer, was not only a great way of exploring new places, but was a great way of escaping the hustle and bustle of the big city. 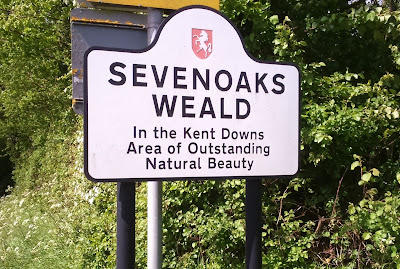 That was then, and this is now and despite giving my bike a complete overhaul, and treating it to new tyres and new inner tubes, I really haven’t been out on it as much as I would have liked this summer. The lousy weather in July and August didn’t help, and there was plenty to do in both house and garden, but sometimes you just have to say, “Sod it, these things can wait”, and bite the bullet.

I already had the route to Weald, mapped out in my mind’s eye, and after checking the distance on Google Maps (6.5 miles), and seeing that the estimated journey time by bike, was just 38 minutes, off I went. 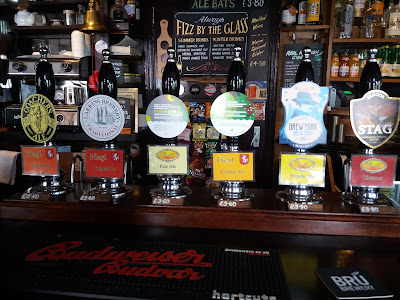 Sixty minutes later I rode into Weald village, and five minutes after that I was propping my bike up against the wall of the Windmill pub and hurrying inside for a well-earned pint. In case you hadn’t already guessed, the Windmill was my intended destination all along, and it was a pint of Larkin’s Green-Hopped Best Bitter I was after.


I was to be disappointed in that particular quest as it had all sold out, but by way of compensation there was a pint of Kent Brewery Session Pale 3.7% with my name on it, waiting to be pulled at the bar. After paying for my pint, I went back outside to drink it. I hadn’t locked the bike up, so wanted to keep an eye on it, but more importantly I was rather warm after my exertions, and wanted to cool down. 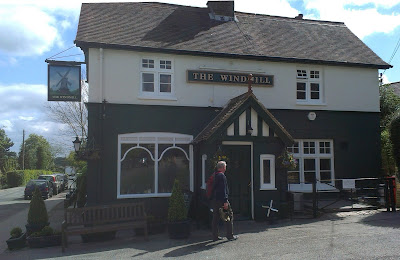 Matt the landlord followed me out, mainly to say hello. I told him I had cycled over from Tonbridge and he remarked that such a feat was worthy of at least two pints! In the end I only had a pint and a half. The Session Pale was excellent, pale in colour, and absolutely bursting with citrus hops.

I was tempted to go for the Green-Hop offering from the same brewery, but at 6.0%, the  Green Giant IPA would not have been a good idea  on two wheels, and narrow roads to navigate. Instead I opted for Brew York,  a 4.9% American Pale Ale from York-based, Brew York. It was darker than the Kent Brewery beer, and much maltier in character. 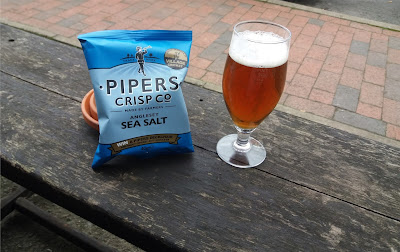 I bought a packet of Piper’s Sea Salt Crisps to go with my beer and was in crisp heaven. I rarely see crisps from this king of crisp manufacturers, but when I do I never overlook them. I sat back outside again. The pub was busy inside, mainly with diners, although there were a handful of serious drinkers clustered around the bar.

And so to the return journey. I retraced my route back along Scabharbour Road, before turning off down the intriguingly named Egg Pie Lane. This is a route my friends and I have often taken on foot, as it leads back towards Hildenborough station. It is quite a narrow lane and there are some impressive looking houses scattered at intervals along its length. 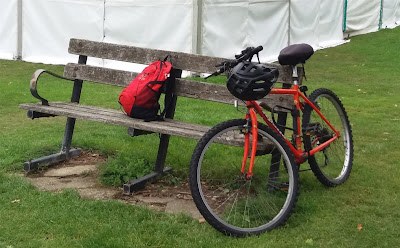 I was able to free-wheel for much of the way. I hadn’t really noticed the steady climb on the outward journey (apart from the last section), so this was a real  bonus for me. Much of the ride back down through Hildenborough, and into Tonbridge, was also downhill as well. This is one of several roads in the area where there is a dedicated cycle lane, sharing the pavement with pedestrians, so I really flew back along this part of the route.

I was back in Tonbridge in time to pick up a few bits of shopping, before arriving back home. I pushed my bike up the hill on the last stretch, but 13 miles wasn’t a bad run for someone who hasn’t done a lot of cycling recently. Next time I do the ride, I will persuade my old walking friend Eric to accompany me, as I’m sure he’ll enjoy both the ride and the destination.

One final thing. I am a reluctant convert to cycle helmets. I never liked the thought of wearing one; preferring instead to feel the wind rushing through my hair. I was given one for Christmas, so thought I ought to wear it. I know it makes sense, and I know that in the event of a tumble a helmet could make all the difference. I am not as young either as I was when I set off on those rides out of London, three and a half decades ago, and I doubt my reflexes are quite as sharp as they were then.

I still don’t like wearing one though, as despite helmets being vented, my head still feels very hot with one on, but c’est la vie!
Posted by Paul Bailey at 20:53

Good way to get some exercise and have a reward waiting at the end.

" It is quite a narrow lane and there are some impressive looking houses scattered at intervals along its length."

And some tucked in well back of the lane.
(and I like the way Google Maps in walking or cycling mode shows what type of inclines you will meet along the way)

There are certainly some well-tucked away “des res’s” (as we say in the UK), along Egg Pie Lane, Russ. City traders or merchant bankers, depending on how well you know your Cockney Rhyming slang!

Heh. I know a little of the slang from me old Da (mostly Frog and Toad and the like). I'm guessing the banker one would start with a "w" but the trader one has me stumped. :)

That area has loads of great cycling routes, and pubs to boot! Nothing better than a liquid reward, especially after a fulfilling ride - sounds like a great afternoon!

Russ, the rhyming slang only applies to merchant bankers; some of whom may, or may not also be city traders.

This part of west Kent is popular with cyclists, Tabitha. This may have something to do with the area's proximity to London. I'm only an occasional cyclist, as my knees and thighs told me the following day!

"Russ, the rhyming slang only applies to merchant bankers; some of whom may, or may not also be city traders."

Gotcha. The two are sort of interchangeable but only one has a rhyming slang. :)