Last month I posted an article about the five pubs which have appeared in every edition of CAMRA’s best-selling Good Beer Guide. That’s 45 editions and 45 years continuous entry.

Now that takes some doing, and is one hell of an achievement, but here in West Kent we have a few longstanding entries of our own, and earlier in the week, the local branch awarded certificates to two of them. I was amongst those present when the awards were handed over, and here is my report.

First up, and celebrating 20 consecutive years in the Guide, was the Dovecote at Capel. Now Capel is little more than a row of houses, the odd farm plus a 13th Century church, close to the village of Five Oak Green, three miles to the east of Tonbridge. The Dovecote forms part of the aforementioned row of houses and, whilst little is know about its history, is a fine country pub. 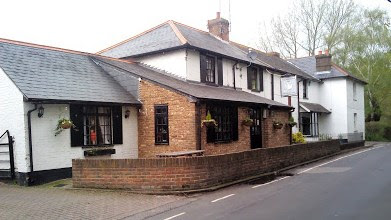 With very few chimney pots in the immediate vicinity, the Dovecote has to offer something special to attract custom, and it does this by stocking a range of up to six cask ales, alongside what it describes as “good traditional, locally-sourced homely food, in a cosy atmosphere”.

I have known the pub for the past 30 years, and little has changed apart from the installation of an ingenious system for serving cask-beer by gravity. This was devised by a former landlord, and it involves the casks being kept in a temperature-controlled room, immediately behind the bar. Extra-long cask taps protrude through the dividing wall, and out through false barrel ends, made out of wood, set into the wall. The result, beer kept at just the right temperature, and served in the most natural way possible – straight from the cask. 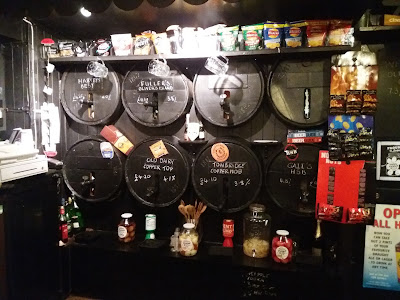 Harvey’s Sussex Best and Gales HSB (now brewed by Fuller’s, of course), are the two regular beers, alongside something from Tonbridge Brewery. When we called in on Tuesday evening, Old Dairy Copper Top and Fuller’s Oliver’s Island were also on sale. I opted for the latter, and can report it was in excellent condition (3.5 NBSS). This was my first taste of this beer on cask; although I am pretty certain I have tried it in bottled-form.

For those of us still working, (not many amongst a branch of mainly retirees), it was rather a rush getting to the Dovecote for the 7pm presentation, but a non-working friend, very kindly gave me a lift. We joined half dozen or so other members who’d arrived ahead of us, also by car. 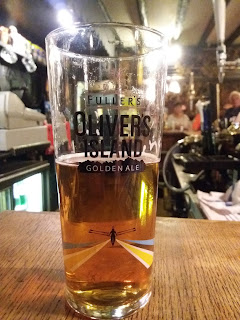 Charlie, the landlord had been tipped off about our visit, but I think that even he was unsure that the pub had clocked up that many years in the guide. The bar was still fairly quiet, so branch chairman Craig, went ahead with the presentation, along with the usual congratulatory speech. Charlie was thrilled with the award, and thanked us for coming. We would have liked to have stayed longer, but we had another presentation to make that evening; this time to a back-street local in Tunbridge Wells.

We set off, in two cars, and made our way to Mount Sion; a short distance up from the town’s High Street. This is an area of narrow and in places part cobbled streets, with a mix of substantial early Victorian houses and charming, cosy cottages, which is often referred to as the “Village” area of Tunbridge Wells. Despite the obvious parking problems, it is a very desirable, but rather expensive, part of the town in which to live. 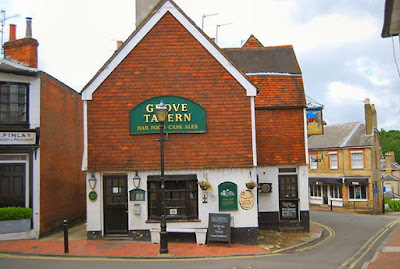 We made our way to the Grove Tavern, in Little Mount Sion; a tiny and cosy “L”-shaped pub which is a contender for the title of the oldest pub in Tunbridge Wells. The Grove is a drinkers and a sports enthusiast’s pub, which  attracts its own loyal crowd of regulars, but with an open fire in winter, and some lively conversation at the bar, visitors are soon made to feel at home here.

The pub is ably run by landlord Steve Baxter, with help from wife Jane and sometimes their daughter as well. The Grove is celebrating its 15th year in the Good Beer Guide, and once again it fell to chairman Craig to make the presentation. There was a much larger CAMRA contingent present, than there had been at the Dovecote; unsurprisingly really given the pub’s central location. There was also a good crowd of regulars in the bar as well.

The Grove stocks Harvey’s Sussex Best and Taylor’s Landlord as its regular beers, with a couple of guest ales normally on sale alongside. On Tuesday these were Templar, from Pilgrim Brewery, plus a 4.2% Green Hop Ale from Wantsum Brewery. I made the mistake of choosing the latter, which was foolish, given that I have never been a fan of Wantsum beers. 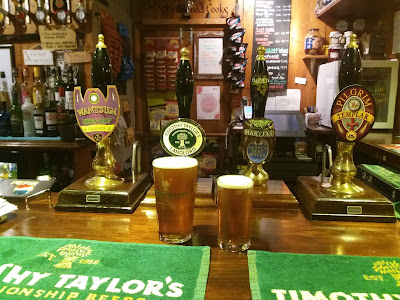 My instincts were correct, and the beer had a peculiar “woody” taste which at first I put down to the green hops, before recognising this undesirable, off-tasting characteristic. I wasn’t the only person who was unimpressed with this beer, but the excellent pint of Landlord I had after, made up for it.

As mentioned it was a good turn-out and Steve was obviously pleased with his well-deserved award. I didn’t stay too much longer, as I took advantage of my friend’s offer of a lift back to Tonbridge. It was a “school-night” after all, so I was quite pleased to be home, shortly before 10.30 pm.

It had been an enjoyable evening though, and it was particularly good to see two quite diverse pubs, which are almost polar opposites, doing so well.

From the inconvenient flights to having to sort out the men's wages I'd say it was a serendipitous concatenation of events. :)

Congrats on being a virgin no more! (Oktoberfest-wise of course).

More details of the event itself, and our experiences there, to follow.

Between your bike post just prior to this one, and the fact this post highlights two contrasting pubs, it seems the area where you live is quite good in the sense of an embarrassment of riches in deciding where to go for a pint. :)