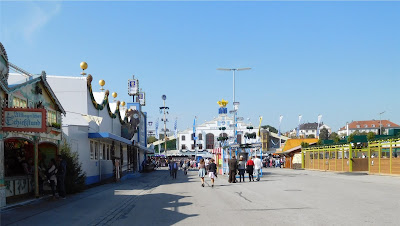 Continuing the narrative from where we left off last time, we were now  inside  Oktoberfest, and it was still only 11.30 am. The grounds were relatively quiet, and visitors were just trickling in slowly, so what to do next?  Well a beer wasn’t the first thing on any of our minds. Coffee plus something to eat seemed a far better idea, especially as breakfast wasn’t included in our hotel booking.

Salvation came in the form of Bodo’s Backstube, a “tent” decked out in the style of an Alpine chalet, serving coffee and various cakes. Eileen went for a large slice of Apfel Strudel, whilst the lad and I chose a Kirschwasser (Cherry Schnapps) Donut. Not exactly the healthiest of breakfasts, but something at least to line the stomach with.

We sat inside Bodo’s for twenty minutes or so, polishing off our cake and finishing our coffee. When we emerged, the festival grounds were starting to fill up. We had a good wander around, taking in the Augustiner “tent”, the Ochsenbraterei; a large “tent”, specialising in roast oxen, along with Spaten beer. The outside Biergarten area of the latter looked pretty full, so we thought we perhaps ought to head for a “tent” ourselves, before all the seats were taken.

A bit more information, plus some handy tips here. The “tents", referred to in parentheses are not really tents at all; certainly not in the traditional meaning of the word. They are large and spacious, semi-permanent structures, constructed mainly from wood, along with various other materials. They are erected each year, specially for Oktoberfest, and then at the end of the event, are dismantled, removed from the site and stored in various warehouses, ready for the following year.

The word “Zelt” means a tent in German, and the one we were heading for was the Hacker-Festzelt. This “tent” has been at Oktoberfest since 1907, and is particularly popular with young Bavarian drinkers. Nearly all of them are decked out in traditional costume, or “Tracht”.  This means Lederhosen, checked shirt and white or beige socks for the men, and Dirndls for the women. With the latter, the skirt should come down to just below the knee, rather than above it, and there is a whole etiquette, mainly relating to marital status, surrounding which side the bow should be tied.

Now some important information, so please pay attention. Unless you have a seat; either inside or outside one of the tents, you will not be served. There is none of the vertical drinking common at UK beer festivals, and you will not be allowed to wander around carrying your mug of beer. By “seat” I mean a long bench, in front of an equally long wooden table. Typically there will be room for 10 average sized people, on each table (five along each bench.). 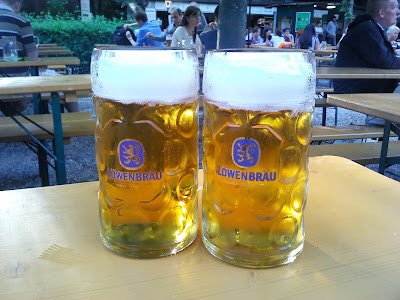 If, like us, you visit mid-week and arrive early, you will not have a problem finding a seat. If your visit is planned for the evening, or at the weekend, then it is almost essential to reserve a seat in advance. This is particularly important if you are part of a large group, as with a bit of patience, “couples" can normally be squeezed in somewhere – especially if  you ask nicely.

Reservations normally open in April for the upcoming Oktoberfest, and must be made to the individual tents. Full details can be found online, here. The reservation itself is free of charge., but it is usual for each person to buy vouchers for a certain amount of beverages and food (in most cases two litres of beer and one roast chicken). These are valid only for the current Oktoberfest and have to be paid in advance. The vouchers can be redeemed inside the tent. 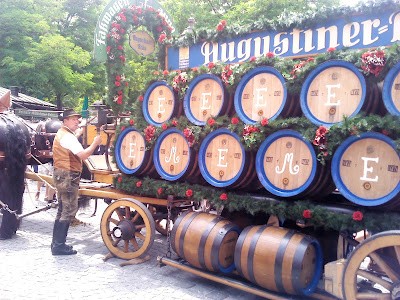 Of course, visitors are free to eat and drink more than the amount that has been paid in advance. It should be noted that reservations are not for a complete day but for a specific time-slot, which will be confirmed with the reservation. This is to allow more groups of people to celebrate inside the beer tent.


Back to the Hacker-Festzelt, and I am sorry to report that we were refused entry. This wasn’t because the tent was full, or that the seats were all reserved; the reason we were unable to gain access was we were all carrying bottles of water! To us, the water was a sensible precaution. We were going to be drinking some quite strong beer. The sun was shining and temperatures were forecast to hit the mid 20’s. Drinking lots of water seemed the sensible thing to do, but because water is available INSIDE the "tent" (at inflated coast, no doubt), the management weren’t keen for people to be bringing their own in.

I don’t know whether this applies to all the tents, or just certain ones, but all was not lost as, just in front of the tent was an outdoor beer-garden area, and there were some spaces available. We grabbed space on the end of a table, stuck our water bottles on the ground, by our feet and waited for the waitress to come and take our order.

This didn’t take long, but the lady, who came to our table was slightly more advanced in years than the young Frauleins I alluded to earlier. She was quick and efficient though, and I have to say that the staff who work the tables at Oktoberfest deserve every Euro they are paid. Treat them politely, tip them well – but not too generously, and they will see you alright. Our waitress brought two foaming Maβ Krugs of Hacker-Pschorr Festbier for Matt and I, plus an equal measure (and an equal price), of alcohol-free beer for Mrs PBT’s. 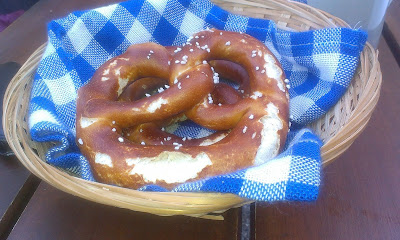 According to one survey at least, Hacker-Pschorr came out top of the Festbiers, but that’s just one survey. All the Oktoberfest beers will be good, full-bodied, well-rounded and with the right balance between malt and hops. Matt and I certainly enjoyed our Maβ Krugs, and Eileen enjoyed hers; even though I had to finish it, mixing what was left in her glass with what was left in mine.

It was very pleasant sitting out in the warm, late-September sunshine, taking in  the atmosphere and enjoying the general ambience. Our waitress returned and asked if we wanted anything to eat? Something solid inside, apart from a Cherry Schnapps Donut, seemed a good idea. Eileen and I both had a plate of local (Fränkische), sausages, with potato salad; Matt had roast pork in gravy, with one of those spongy potato dumplings (Kartoffel-Knödel). 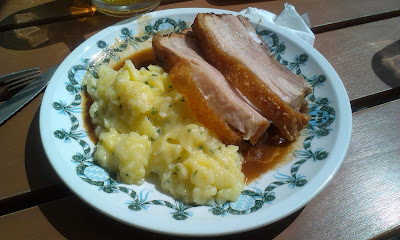 It’s worth mentioning here that at Oktoberfest, you pay for your food and drink when they are brought to your table; unlike the practise in most German pubs and restaurants, where you pay before you leave. This makes perfect sense, given the high numbers of people coming and going, and I prefer this anyway, as it saves hanging around waiting for the final bill to appear.

One thing I did do before leaving, was nip inside the tent. With no water bottle in hand, and no bag either, I was not challenged and was able to wander around taking as many photographs as I wished. It was pretty hectic inside and was full of mainly young locals, the majority wearing "Trachten". 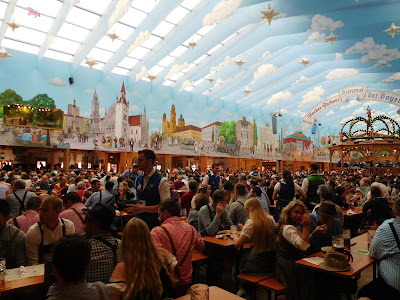 The Hacker-Festzelt can accommodate up to 9,300 people, which is a similar number to the other large “tents”. There are fourteen of these; seven of which are operated by the breweries, and the rest by independent landlords. There are also around 10 smaller “tents”.

We had a wander around afterwards, but didn’t have any more beer. I calculated that finding a “tent” with a free table, and then ordering  and consuming another litre of beer would take at least an hour, and as we were due to head for Regensburg, for the main part of the holiday, I also had the responsibility of guiding the family to the station, buying the tickets and making sure we boarded the right train. 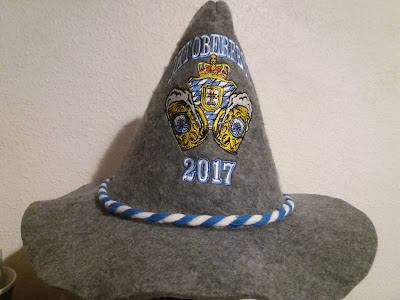 We did a rough circuit of the site before making our way towards the exit, taking in such traditional fairground attractions as the “Haunted House”, the motor-cycle “Wall of Death” and one of those “try your strength” machines, where you have to bring a large wooden mallet crashing down on a “puck” in an attempt to ring the bell at the top of a tower. We also all bought ourselves an Oktoberfest hat, and I shall be wearing mine whilst working at next weekend’s Spa Valley Beer Festival.

The main thing we discovered about  Oktoberfest was just how accessible the whole thing is and,  having now “learned the ropes”, I would definitely go again but this time spend a bit longer there.

Ahhh... litres of good German beer and either chicken or pretzels. Brings back memories. :)

The Hacker and Pschorr are bloody huge. If you go back again, check out some of the other tents for sure. Anywhere from 300 to 1,500 if memory serves. And I'd say it was a good thing to lose your Oktoberfest "virginity" with the family. Going with a bunch of the lads for the first time might have yielded a different result. I went with about 10 others from the local hostelry I was staying at and we hit every large tent the first night... which resulted in me getting separated from the group (I think I was the 4th to do so) and having to get the police to get me a taxi back to where I was staying. (blush)

The second night we were wiser (if not older) and paced ourselves whilst pointing out who were there for their first time (as they were getting just as inebriated as we had). :)

But as long as you're smart about it Oktoberest is a good place to experience, no doubt about it.

A “lads piss-up” doesn’t sound the best way to experience Oktoberfest, Russ; however enjoyable it may have seemed at the time!

When I go again, it will either be with my son, or with a carefully selected group of mature friends. I also intend to give one or two of the smaller tents a try, as well.

"A “lads piss-up” doesn’t sound the best way to experience Oktoberfest, Russ; however enjoyable it may have seemed at the time! "

Totally agree Paul. This was back in 1980 and I was young (and foolish of course); and the other people I went with on the first night were a mixed bunch of male/female strangers staying at the same hostel.

The second night was much better, having learned how to pace myself and just people watch. :)