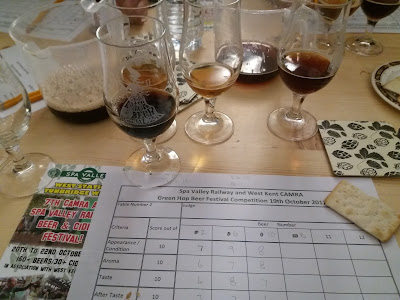 On Thursday night I acted as one of the judges in the Green Hop Beer Competition, the contest which acts as the prelude to the Spa Valley Railway Beer & Cider Festival. I was sort of press-ganged into it, but reluctantly agreed, primarily because I didn’t want to let my CAMRA colleagues down.

Now I’d far rather be drinking beer than judging it, and this is borne out by the fact that despite having completed a “Beer Tasting Course”, last night’s event was only the second official tasting I have participated in. Despite this, I was determined to give the contest my best shot, so I left work early, and made my way over to Tunbridge Wells,.

I  arrived at the restored Victorian engine shed at the former West Station, which acts as SVR’s headquarters, shortly before 6pm. The shed is where the bulk of the festival’s beers and ciders can be found, and the sight of row after row of casks, all stillaged, tapped and spiled in readiness for the weekend’s event, was quite awe-inspiring. 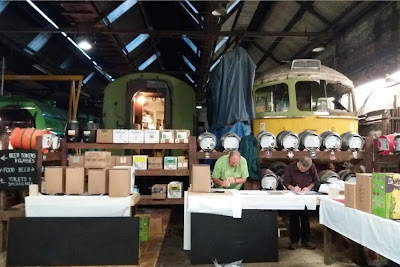 Several local CAMRA members were behind the bar, affixing the cask labels to the barrel ends. After months of planning, it was good to witness everything coming together for what is now one of the largest beer festivals in Kent and neighbouring Sussex.

The judging took place in a covered area just in from the railway’s booking office.  Four tables had been laid out in readiness for the competition; each with seating for six people. With 24 Green Hop Ales in the competition there were 24 judges to start with, although as the contest progressed, this was whittled down to 12, and then finally just six judges.

My fellow judges included the Mayor of Tunbridge Wells, plus two other distinguished guests. The first was Sophie Atherton, who is a journalist and beer writer; and was the first female to qualify as a Beer Sommelier. The second guest judge was the veteran beer writer, Roger Protz who has just stepped down as editor of CAMRA’s award-winning Good Beer Guide, after editing 24 editions of the publication.

Before the completion started, Sophie talked us through the basics of beer judging, telling us what to look for with regard to appearance, condition, aroma and taste. This was a welcome refresher, even to those of us who thought we knew all about beer judging.

Roger gave a short talk afterwards reminding us that back in the days of the first Good Beer Guide, when CAMRA was in is infancy, there were only around 150 brewers in the country, and the choice of beers from these companies, was almost exclusively mild or bitter, with sometimes a best bitter plus the occasional winter offering around Christmas time.

The beers were judged in a series of “blind” tastings, with each judge tasting six different beers in each session. We were asked to score each beer out of 10 points, on appearance/condition, aroma, taste, after-taste and finally our overall opinion. The latter criterion was worth up to 20 points. This was much more difficult than it sounds, and whilst we were allowed to confer, we weren’t supposed to see the scores our fellow judges had awarded. I was in good company on my table, as I shared it with Sophie, Robin from Pig & Porter Brewery, John from the recently established Engineer Brewery, the head-brewer from Cellar Head and Russ whose family farm and grow hops at St Michael's, just outside Tenterden. 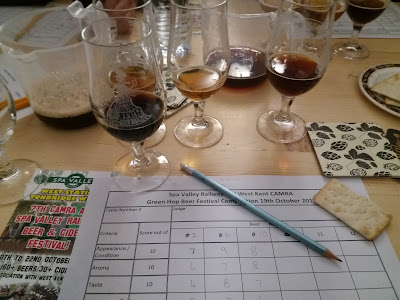 A short interval then followed, during which the tables were cleared, the glasses were washed, and new scoring sheets issued. The process was then repeated. As mentioned above, the number of judges was then halved. I was one of three people who stepped down on my table; leaving Sophie, Russ and the gentleman from Cellar Head, whose name escapes me, to tackle the semi-final.

This process trimmed the remaining 12 beers to just six finalists, and the winner was then selected from this half-dozen, by a panel of six “senior “ judges. These included Sophie and Roger, plus local pub landlord and restaurant proprietor, Matthew Sankey.

Once the scores were all in and everything had been double-checked, Dark Star Green Hop IPA was declared the worthy winner, with Downlands Green Hopped Root Thirteen in second place and Cellar Head Poledancer in third.

Certificates for third and first place were then presented to the respective brewers by West Kent CAMRA Chairman, Craig Beeson. There was no-one present from Downlands Brewery to collect the runner-up award, but I'm sure we'll be visiting the brewery in due course.

The competition for top Green Hop Beer of the Festival, has been named in memory of Iain Dalgleish; West Kent CAMRA's former long-serving chairman, who sadly passed away in August, after a long battle with cancer. I am sure Iain would have approved of this move, and also of the winner.

Despite my initial reservations, I thoroughly enjoyed the experience, and it was good to listen to the thoughts and opinions of my fellow judges. One thing which did come out, and this is an observation which has been made by friends and other CAMRA members over the past fortnight, is that none of the beers had a particularly hoppy aroma. This is rather surprising considering the use of freshly harvested hops in the brewing of them. 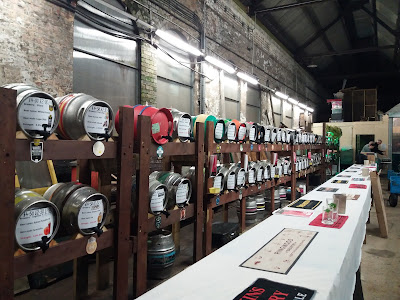 My own experience, and again this is something I share with fellow branch members, is that Green Hop beers tend to leave a coating of resinous oils on both the tongue and the roof of the mouth, and this may actually act as a barrier to both taste and smell. I consequently found it refreshing to go for a few “normal” beers afterwards.

I was able to do this because the organisers (SVR & CAMRA), had opened the bar, although payment was taken for beers consumed. I chose a few beers which I thought might disappear quite quickly, once the festival opened to the public, and these included, Imperial IPA 7.4% from Outstanding Brewery and Baltic Trader 10% from Green Jack Brewery. I also enjoyed California Common, a 4.6% “Steam Beer” from Knops Brewery. 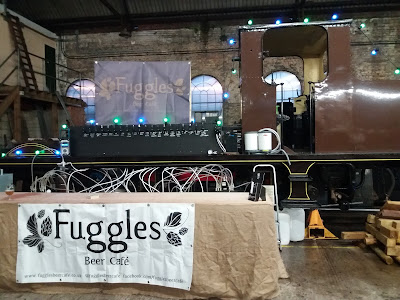 I departed just before 10pm, and walked up through the pouring rain to Tunbridge Wells mainline station. I got equally wet at the other end, and arrived home looking like a drowned rat!

It's late on Friday evening, and as I finish writing this piece, the festival will have just called time after the first full session of the event. Judging by the messages floating around on WhatsApp, it has been a reasonably successful day, although some concern has been expressed about the number of strong beers which make up this year’s order.

Unfortunately I had had to go into work, as two members of my department were away on business, but I shall be over at Tunbridge Wells on Saturday, to do a stint behind the bar and see how things are going. A report will follow in due course.

It must be Dave Berry from Cellar head.

Thanks, Ed. Didn't he work for Old Dairy and then for Tonbridge Brewery?

"Before the completion started, Sophie talked us through the basics of beer judging, telling us what to look for with regard to appearance, condition, aroma and taste. This was a welcome refresher, even to those of us who thought we knew all about beer judging."


And quite the august personages to be paired with for the judging. :)


"although some concern has been expressed about the number of strong beers which make up this year’s order."

That's understandable. One of the (minor) drawbacks at times over here is that few beers are under 5% (barring the "lite" beers of course). I currently have seven different beers in my beer fridge ranging from 5% to 8%. I buy some that are 10% and while those are nice for a nightcap I would not want to drink them all afternoon!

Sounds like a good time (and I agree beer tasting/judging would not be an easy thing) and opening the bar as a perk at the end for your hard work was a good idea.

Russ, my American brother-in-law often complains about the high strength of North American beers. After living over here for 13 years he misses “session beers” with a sensible 3.5 – 4.5% strength.

"Opening the bar as a perk at the end for your hard work was a good idea." Apart from us having to pay for the beer!

Ouch, missed that bit. But you did get to have first dibs I guess. 😏