I wasn’t really expecting to be going out pubbing the night after returning from holiday, and the night of my first day back at work, but things sometimes have a habit of turning out differently to what's been planned.

A couple of WhatsApp messages from my local CAMRA branch alerted me to a hastily arranged night out in Tonbridge, so keen to catch up with a few of my friends I decided to bite the bullet and show my face.

It was an early start, but I assured my wife that an early kick-off would mean an early return home. As I walked towards the front door she had that look which said “I don’t believe you.” She obviously knows me rather too well, which is hardly surprising after 32 years of marriage, but she also knows that I am unlikely to arrive back home three sheets to the wind; especially on a “school night.” I told her I would see her later, and headed off towards the Forester’s Arms; our pre-arranged meeting point.

The early start meant a 7pm meet-up; far too early for someone like me who doesn’t leave off work until 5pm, and then likes to enjoy and digest his dinner in peace, but it was for a good cause, as the branch was due to present an award to the Forester's for the season’s "Most highly commended pub."

This is a new award, which recognises the work and enthusiasm put in by licensees in order to improve the pubs in their charge, throughout the West Kent CAMRA branch area. In the Forester’s case, landlord Tyson Marshall has turned around what was once a pub to be avoided. In the space of just over a year he has transformed the pub into a very pleasant place to drink in and socialise at.

I was the second to last of our group to arrive, and I found the rest of the party sat at a long table in front of the window. I ordered myself a pint of Whitstable Bay Pale and went over to join them. Not long afterwards Tyson came over with a couple of delicious-looking,  pizzas for us to share. I reluctantly declined, having just had a quite filling meal, but I was sorely tempted.

I think Tyson knew we were coming, but wasn’t aware of his award, as come presentation time he'd disappeared upstairs, and had to be called back down by one of his bar staff. Branch chairman, Craig Beesom handed over the certificate to Tyson, and outlined the reasons why the Forester's had been the first pub chosen to receive this award. Tyson was genuinely pleased to see his efforts and hard work rewarded in this way, and after posing for the obligatory photo shoots, stayed to chat with us for a while.

The pub was reasonably busy, with a good mixed crowd, and for a Monday night this was good to see. The beer too was in good condition and I was particularly impressed with the Whitstable Bay Pale; scoring it at 3.5 NBSS. For those who fancied something a little different, Spitfire Gold and Woodforde’s Wherry were also on sale. 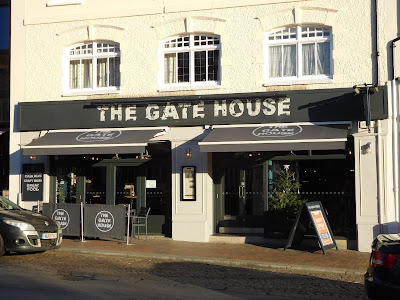 At around 8.15 pm we moved on to the second pub of the evening; the Gate House, at the other end of Tonbridge High Street. This lively outlet was holding a “Meet the Brewer” evening, which is why it had caught our attention. The brewer in question was from Kent Brewery, and there were a couple of the company's beers on sale.

I gave the 4.0% Black Gold a miss, as I am not a fan of Black IPA's, but can report that the 4.5% Citra Single-hop Ale was excellent, pale in colour and bursting with flavours from this wonderful aromatic hop (3.0 NBSS). I didn't get to chat to the brewer, who had driven over specially from West Malling,  but several members did.

Apart from the eight CAMRA members making up our group, there didn't seem to be much interest amongst the pub's other customers. This was a shame, considering the lengths the Gate House had gone to in order to host the meeting, but perhaps it was asking a bit too much for a Monday night?

A group of us moved on to Fuggles after, but I only stayed for one beer; a 3.6% Green- Hop Ale called Thirteen Pale Ale, from Downlands Brewery. I  left shortly after 10pm, and true to my word was back indoors by 10.30pm. Despite my early homecoming, Mrs PBT’s still hadn’t waited up for me and instead was tucked up fast asleep in bed.
Posted by Paul Bailey at 21:35

Sounds like a nice mini pub crawl. Love the idea of the award for effort put forth. Not bad.

Oh, and the 2nd photo on Google Maps shows a pizza that is half Hawaiian at the Forester's Arms. (my fave!) :)

Did The Gatehouse used to be called the Slug and Lettuce?

And Fuggles looks brand new and has a daunting beer board (according to the photos).

PS - Of Course Mrs PBT went to bed. That way you can't prove you were true to your word with regards to coming home on time (j/k - LOL).

Hi Russ, the Gate House did used to be the “Slug & Lettuce” – one of the worst contrived pub names imaginable. S&L are/were a chain of similarly themed outlets. The revamped pub does major more on beer than the Slug used to.

Tyson at the Forester’s serves up a really mean pizza. He’s originally from Melbourne, if that’s got anything to do with it!

Fuggles opened in Tonbridge a couple of months ago. The original Fuggles Beer Café is in Tunbridge Wells, and has been open 3 or 4 years. Both are definitely the places to go, if you want something out of the ordinary.