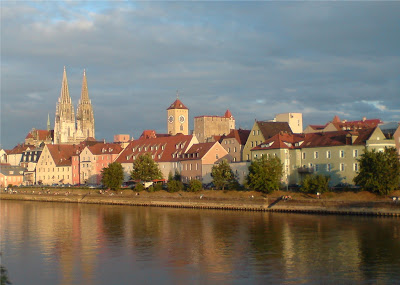 It’s highly appropriate that on the eve of our departure to Regensburg, I should be finishing off the last of the bottles I brought back from our previous trip to the city. The beers I am referring to are part of a range produced by Regensburg’s oldest brewery; St Katharinen Spital Brauerei (usually known as Spital Brau), founded in 1226.

Sold under the Regensburger Spital Manufaktur brand, and packaged in attractive-looking, long-necked 330ml bottles with a definite “craft” look to them, these are definitely some of Spital’s more unusual beers. Several are English-style beers, such as Pale Ale, India Pale Ale, Summer Ale and Chocolate Stout which, for a German brewery,  really is stepping outside your comfort zone. 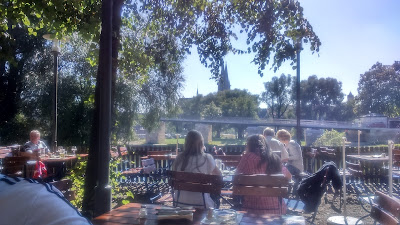 Last year we spent a most enjoyable lunchtime at Spitalgarten, which adjoins the brewery, just off the end of the centuries old Steinernen Brücke (Stone Bridge).  With its setting next to the River Danube, and its views of old town Regensburg and its imposing cathedral, Spitalgarten ranks as one of my favourite German beer gardens. I wrote about our visit here.

On the way back I made a detour to the brewery shop to pick up some bottles from the Spital Manufaktur range, and ended up bringing four back with me. They all are attractively packaged, with stylish and modern-looking foil labels. One of them is Spital’s standard Pils, repackaged under the new brand, but the other three are very much in the Anglo-American tradition. My impressions of them are detailed below. 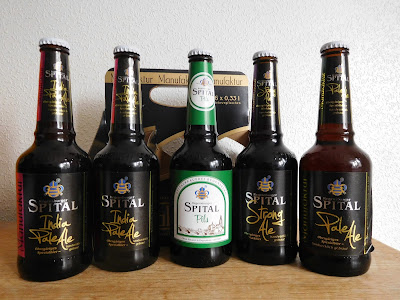 Pils 5.5%.  Like all the beers, the Pils is presented in a stylish, long-neck bottle which glugs nicely as the beer is poured. A very pale beer, slightly sweet and possibly more like a Helles than a Pils. There is a slight hop-bite lurking in the background.

Refreshing in character, this beer would be nice enjoyed under the shade of the chestnut trees in Spital’s lovely beer garden, next to the River Danube, in Regensburg.


Pale Ale 6.5%.   Best described as a Pale Ale with a "Bavarian twist."  Medium orange in colour with a  frothy, clean white head.  The beer has a nice hoppy aroma, with some citrus notes present, and has a full bodied malty taste. Again, some fruit flavours are noticeable. 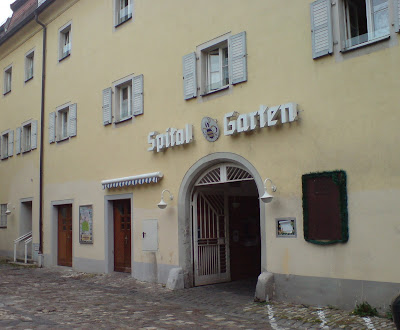 On the strong side for a Pale Ale, but then the entire range gravitates towards the top end of the spectrum, and doesn’t take any prisoners.

India Pale Ale 8.0%. The beer is very much in the English tradition, rather than the citrus-driven, American interpretation of the style. It’s an attractive amber colour and pours with a nice frothy head which remains in the glass. It’s also a very malt accented beer, with a nice hoppy aroma and sufficient bitterness to counter some of the sweetness derived from the malt.

Strong Ale 9.9%. Definitely the grand-daddy of the range. Dark mahogany in colour, and very little head, despite the strong carbonation; this beer is like drinking pure toffee-malt in a glass. 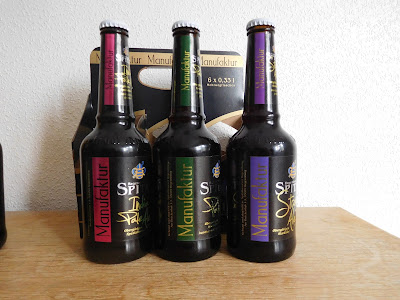 Similar to a barley-wine, or other English-style Strong Ale. Harvey’s Christmas Ale springs to mind, but this offering from Spital is not as well-hopped as the Harvey’s beer. Still dangerously drinkable for a beer of this strength.

Weather permitting, we shall be almost certainly be visiting Spitalgarten, plus the brewery shop again. This time round I am looking to bring back some of the other beers from the Spital Manufaktur  range, such as the Maibock, Märzen, Summer Ale, Chocolate Stout and Weizenbock

Chocolate Stout which, for a German brewery, really is stepping outside your comfort zone.
I wish I could find a decent chocolate stout where I live (sigh).


Looks like you're all set for the trip. Should be fun. :)

Arrived in Regensburg three and a half hours ago, after spending last night in Munich.

Oh, and we just had to call in at Oktoberfest on the way!

Lots to report, but only a mobile phone to do it on.

"Lots to report, but only a mobile phone to do it on."

Ugh, takes notes and wait till you get home then.


And Oktoberfest to boot! Lucky bugger. :)

Hi Russ, have taken mental notes and plenty of photos.

Just a quick visit to Oktoberfest on Monday, whilst passing through. Munich absolutely manic earlier today, so headed straight to the airport where we are enjoying a few house-brewed beers at Airbraeu.