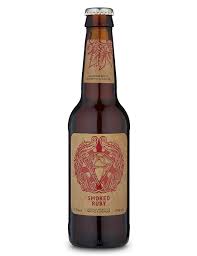 I popped into Marks & Spencer at the weekend, ostensibly to pick up a few items of shopping for my wife; but whilst in the store I couldn’t resist taking a look at the beers on sale. With always an eye open for a bargain, I spotted this little beauty sitting on the shelf at the almost give away price of 70p a bottle.

M & S Smoked Ruby 4.7%, is a dark red beer, with an intriguing sweet nutty, smoky flavour, derived from the fact the malt used in the brewing process has been smoked over cherry wood. This gives an interesting twist to the classic smoked flavours normally associated with this style of beer.

The beer is brewed by Adnams of Southwold, on behalf of Marks & Spencer, and I recognised it as one I tried a couple of months ago. I liked it back then, and said at the time I would definitely buy it again, especially as there’s plenty of smoke in this beer! So to see it selling at less than a third of its original price was something I just couldn’t resist, and I ended up buying all four bottles remaining on the shelf.

They still had a couple of months shelf life remaining, so I was left wondering was this just a genuine stock clearance or had M&S bought a pup by commissioning a beer which for some people pushes towards the limits of “extreme” beer? 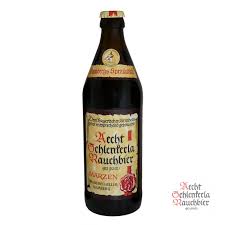 Smoked beer is definitely a “Marmite” beer for most drinkers; you either love it or hate it. Fortunately I absolutely love it, ever since I tried my first bottle of “Aecht Schlenkerla Rauchbier”, the legendary, world-classic Smoke Beer, from Bamberg in the Franconia region of northern Bavaria.

This would have been back in the late 1980’s when, for a brief glorious period, Sainsbury’s stocked the beer. Twenty years later and I found myself sitting in the centuries old Schlenkerla Tavern in Bamberg itself, enjoying a few glasses of draught Schlenkerla Rauchbier, poured straight from a wooden cask. I can’t tell you how good that beer tasted, and what a magical experience it was drinking that beer in the inner-courtyard (Schwemme), of this rustic old inn, whilst taking refuge from the intense cold of an early December day. I have returned to Bamberg on a further four occasions, and without fail have always called in for a few glasses (Seidla’s in the local dialect) of Aecht Schlenkerla Rauchbier. 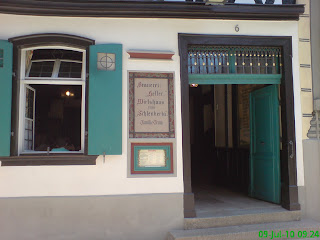 I described smoked beer earlier as a “Marmite” beer, but I have known people who loathed it on their first taste, but then developed a real appreciation of it over time The Heller-Trum Brewery, producers of this classic Franconian Rauchbier say, “Even if the brew tastes somewhat strange at the first swallow, do not stop, because soon you will realise that your thirst will not decrease and your pleasure will visibly increase."

Many other drinkers take to the beer straight away. I admit to being somewhat surprised by my son, who in the UK is a consumer of industrial lager, knocking back glass after glass of Rauchbier, as though he had been drinking it all of his life! 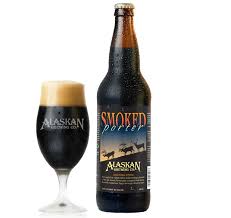 Schlenkerla, of course, is the most famous of Franconia’s Smoke Beers, but rather surprisingly only one other brewery in Bamberg (Spezial) produces the style; and then in a much toned down version. There are several other Rauchbier breweries in the region, but some of the best examples of the style come from outside Franconia, and indeed outside of Germany altogether.

Beer rating sites RateBeer and Beeradvocate, both list dozens of smoked beers, with very few Franconian examples. Most appear to come either from the USA, or from Scandinavia (predominantly Denmark & Norway). Apart from the seasonal variations produced by Brauerei Heller-Trum, I have only had one beer on these rating lists, and that is Alaskan Smoked Porter. This dark 6.5% ABV beer is brewed in limited numbers each November by the Alaskan Brewing Co. who are based in Juneau; the Alaskan state capital. The beer first appeared in 1988 and was largely responsible for introducing the style to an appreciative American audience. 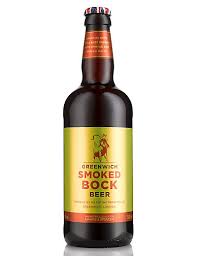 Three years ago, I was singing the praises of another Smoked Beer, in the form of Greenwich Smoked Bock Beer, another beer brewed exclusively for M&S, but this time produced by Meantime Brewery. This was another excellent beer, which seems to have died a death; as after the initial run had disappeared from the shelves, I never saw it again.

Perhaps British drinkers just don’t like the style, and I accept it’s not to everyone’s’ taste and certainly not for the fainthearted. The evidence certainly points to this, otherwise there would be a lot more smoked beers gracing the shelves of off-licences and supermarkets. However, keep your eyes open, as you never know when or where one of these excellent beers might crop up and as an accompaniment for roasted meats, cured meats, strong or even smoky cheese, I can’t think of anything better!

It's weird - I'd assumed that smoked porters were a fairly common thing in a craft-beer-bubble sort of way, but when I actually tried to name a few I ran out fairly fast.

Two good ones that do spring to mind are Beavertown's Smog Rocket and Top Out's Smoked Porter. (Full disclosure - the head brewer at Top Out is a friend of mine.)

I've drunk in Schlenkerla and Spezial in Bamberg and loved them both. The Spezial Rauchbier may not have the same "smack round the chops" smokiness of Schlenkerla's, but I quite liked the subtle balance of it as an undertone.

I’d forgotten about Beavertown Smog Rocket, DaveS. Daft really, as I enjoyed a few cans of it over Christmas.

I would agree with your assessment of Spezial Rauchbier, Matt. It is good at the brewery tap, but my favourite place to drink it, is the Spezial-Keller, on the Stephansberg, overlooking the city.