It seems a long time ago now, but at last October’s Spa Valley Railway Beer Festival; a joint venture between this heritage railway group and West Kent CAMRA,  the award for “Beer of the Festival” went to the Sussex-based Black Cat Brewery.

Keeping with the tradition of previous festivals, it was only fitting that Black Cat should be presented with their award after the festival, with branch members in attendance. Black Cat Brewery owners, Paul and Kate Wratten, were obviously delighted with the news of their award, but were in the middle of both moving house and upgrading the brewery. With all this going on, our social secretary’s attempts at arranging a get-together hit a bit of a brick wall.

Finally, it was decided that rather than local CAMRA members travelling to the brewery, Paul and Kate would come to us. The couple suggested bringing a few casks of Black Cat beer over to the Spa Valley Railway’s HQ, at Tunbridge Wells West station, for members to sample, and this seemed an excellent idea. 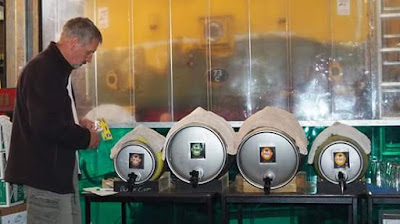 As in previous years, members and friends who had worked at the Beer Festival were given first refusal, but after our Social Secretary had confirmed this arrangement with Paul, at Black Cat, he discovered the brewery would be bringing four casks over. The invitation was therefore extended to  neighbouring North-East Sussex CAMRA, as Black Cat Brewery is located within the area covered by that branch.

Spa Valley Railway agreed that we could use the part of their engine shed, normally reserved for functions, but the snag was they are only permitted a limited number of liquor licenses each year, and one of them is for the actual beer festival. In the end this turned out not to be a problem, as Black Cat would be making the beer available for free, so no money would be changing hands; the only remaining stumbling block was how to distinguish between CAMRA members plus friends, and those members of the general public who, after wandering in and seeing beer being served and enjoyed, might be tempted to join in.

Our ingenious social secretary solved this by issuing the CAMRA contingent with self-adhesive “Smiley” badges, which they had to wear and sign for when they first arrived.  (No badge, no beer!).

I turned up a bit after the advertised start time of 2pm, as I had some domestic matters to attend to. The bad news was I had just missed the presentation, but the good news was there was plenty of beer left. Paul and Kate had brought over four different beers for us to enjoy; Original, Hopsmack, Nine Tails and a new ale-lager cross, called Crossale. The first and last of these beers were in 9 gallon firkins, whilst the middle two were in four and a half gallon pins. All beers were bright, having been racked off that morning and with the help of some wet towels and a few bags of ice, were served nice and cool.

I am already a massive fan of Black Cat Original, and I remember enjoying Hopsmack at the Kent Beer Festival in Canterbury, a couple of years ago. Nine Tails, is a dark winter beer, reminiscent of the late-lamented King & Barnes Old, and I’d had the pleasure of enjoying a few pints of it in the Crown at Groombridge the winter before last.

All the beers were good, but I particularly enjoyed the Hopsmack and the Nine Tails. I managed to chat with Paul and Kate, who were both very pleased with their award. They also told me about the awards they had picked up at the recent SIBA South East Competition, held at Tonbridge Juddians. Their excellent Tzar Imperial Stout not only picked up top of its class (Gold) in the Premium Strong Beer category, but also went on to win Gold as Overall Champion of the Competition!

Paul found out about these awards via our West Kent CAMRA Twitter feed as, due to work commitments, he was unable to be present when the awards were announced; although he had asked his parents to go along on his behalf. This was a fantastic achievement for Black Cat, and a worthy win for a stunning beer. Fortunately I was able to try a glass on the opening night of the Juddians Festival and found it a lovely mellow dark beer, with chocolate and roast notes, plus just the right amount of bitterness. Its 6.8% ABV was just right, as some Imperial Stouts weigh in at 10% plus, and are far too strong for anything more than just a small glass! 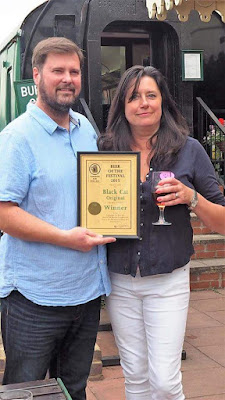 Paul and Kate are pleased with the way the brewery is developing; although at the moment, Paul still has a full time job which often takes him to London. Hopsmack has been selected for this year’s Great British Beer Festival, which meant the couple had to invest in four kilderkins (18 gallon casks), as for logistical reasons the more usual 9 gallon firkins, are too small for the festival. If you are planning to go along to Olympia, it would be well worth sampling this refreshing 4.0% golden ale, brewed from 100% pale malt, and flavoured with a blend of Athanum, Cascade and Amarillo hops.

Our Branch Publicity Officer managed to get the local press to turn up for the presentation, so look out for the story in  Kent Online. By early evening, things had started to wind down, and with the vast majority of the beer drank, people started to drift off. I stayed a while to assist with the clear up, before joining a few fellow members at the Pantiles Tap, for yet more beer. Paul and Kate were there as well for a few quick beers before catching their bus back to deepest Sussex.

I would like to express my sincere thanks to the couple for their very generous supply of beer. It was also a genuine pleasure to meet them both, and to learn of their recent successes. I would also like to thank the Spa Valley Railway for allowing us the use of their premises and for them continuing to finance and partner us in the annual autumn beer festival. (See below).

Black Cat Brewery began life in the village of Groombridge, back in 2011,  as the brain-child, and part time project of commercial airline pilot, Marcus Howes. Marcus developed a range of fine traditional ales on his 2.5 barrel brewery, but juggling the demands of  running the brewery, with his duties as a pilot working for Monarch Airlines, became too much so a few years ago Marcus sold the business to Paul and Kate Wratten, who have since relocated the brewery to Palehouse Common, near Uckfield. The couple are in the process of increasing the size of the brewing plant to 10 barrels to enable future expansion.

The Spa Valley Railway’s major Real Ale and Cider Festival is back for its 6th year and will be bigger than ever before with a planned 130 Real Ales and 30 Ciders. The event will also feature a large number of Green Hop Ales.  The main festival takes place in the railway’s Victorian Engine Shed at Tunbridge Wells West where you can enjoy a pint or two throughout the day in between train rides if you wish.

Entry to the main festival at Tunbridge Wells West is FREE and will be open from 11:00 each day until late evening. The ales and ciders for this event are spread out between three station bars, Tunbridge Wells, Groombridge & Eridge and also bars on two of their train sets.

To reach all the locations Spa Valley recommend a day rover ticket, which allows unlimited travel on the day. For CAMRA members there is a special CAMRA Day Rover ticket available for just £15!  (Proof of CAMRA membership must be provided upon purchase & this offer cannot be booked in advance).

The photos featured in this post appear courtesy of Iain and Carole Dalgleish, and the Spa Valley Railway.
Posted by Paul Bailey at 22:13