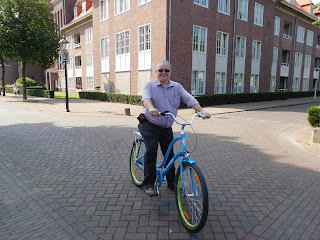 Continuing with the narrative of our stay in the historic city of ‘s-Hertogenbosch (Den Bosch), which formed the prelude to this year’s European Beer Blogger’s Conference, we pick up with the majority of party as we are about to depart from the Abbey of Koningshoeven at Berkel-Enschot.

As I alluded to in the Part One of this narrative, the Dutch bikes provided on behalf of our hosts, Visit Brabant, took a bit of getting used to; the main point being remembering to pedal backwards in order to brake. That and the rather light steering; but once we were underway the group set off at quite a pace, under the leadership of tour guide Nathalie. 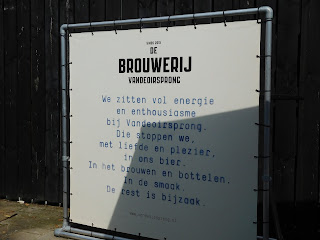 I found myself towards the rear of the party, in the company of our other guide, Yannick. We had met Yannick in Brussels last year, when he acted as r guide for the post-conference excursion to West Flanders. Yannick works for Visit Flanders, the tourist organisation covering that particularly region of Belgium. He told me that he’d been asked by conference organiser Reno Walsh, if he could join the team from Zephyr Adventures, for this year’s event, as not only would this negate the organisers having to fly someone over from the United States, but it would also have the benefit of employing someone with local knowledge, capable of speaking the language (Flemish is very similar to Dutch, but don't say that in the company of anyone from either country!). 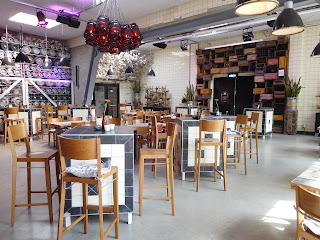 Anyway, Yannick kindly held back to keep me, plus a couple of other stragglers company, and to also make sure we didn’t get lost. I was rather surprised though, when he told us the ride would be around an hour in duration, as I was expecting something shorter; however, I am pleased to say that despite now being the wrong side of sixty, I managed the ride without any problems, apart from a rather sore backside! The latter was caused by an overtly soft and rather too well sprung saddle, which was in sharp contrast to the much harder road bike saddle I am used to on my bike at home. Speaking to a work colleague, who is also a keen cyclist, the other day led us both to conclude that somewhat perversely, the harder the saddle, the more comfortable the ride.

Once we had left the abbey grounds, and cycled a very short stretch along public roads, we turned off onto a path running alongside the canal. Canals in the Netherlands aren’t the narrow affairs they are in the UK; instead they are broad and deep, allowing the passage of quite large vessels along their length. With barely a cloud in the sky, it was an extremely pleasant and enjoyable ride through the picturesque Dutch countryside, and a great way to spend a Thursday afternoon.

We eventually reached our destination the village of Oirschot, and after crossing a bridge over the canal, and riding through the streets of this attractive North Brabant village, we found ourselves at Brouwerij Vandeeoirsprong, where we were welcomed with a refreshing glass of their Amber Bier. The brewery is a newcomer on the scene; having only been operational since 2015, but it occupies the site of a much older brewery, as we later found out. For the minute though, sitting out on the patio, at one of several picnic tables, gave us the chance of recuperating a bit after our cycle ride. 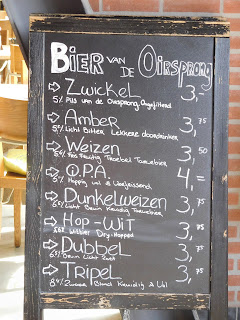 The patio is adjacent to the Brouwerij Vandeeoirsprong taproom, but before venturing inside, we were led through a courtyard, to a much older, farmhouse-like building at the front of the complex. Here we were given a talk by a member of the brewery, whose name escapes me. He explained the history of brewing on the site, and the brewery’s place in a village which once boasted four breweries.

I was correct about the old building, as it was part of a farm. It dates back to 1623, an important date in Oirschot’s history, as much of the town burnt down in that year and had to be reconstructed. The original brewery survived into the 20th Century, because it had the cooling equipment necessary to produce the new fangled pilsner; a beer style which swept all before it during the early years of the last century.

After the end of World War II, the brewery was known as de Kroon (the Crown), and was named after the family who owned it. By the 1980’s de Kroon were one of only 15 breweries left in the Netherlands, but a tie-up with Bavaria Brewery a decade later, didn’t bring the results the family were expecting., as not long afterwards, Bavaria signed an agreement with La Trappe at Koningshoeven Abbey, which left the Oirschot plant surplus to requirements. 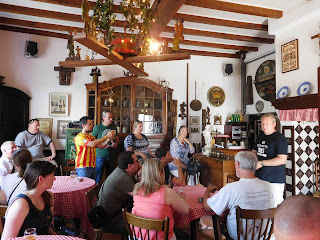 De Kroon closed in 2000, only to reopen some 15 years later under a completely new name. That this happened at all, is in no small way thanks to the head of the Kroon family who, as well as collecting memorabilia associated with the old brewery, had the strength of vision to see the opening of the new brewery, on the same site. He achieved this by going into partnership with his niece.

I’m not certain where the name of the new brewery comes from, as the website is in Dutch only, but I did make a note that the new concern produces between 8 & 10 beers. It also sticks with classic, easy-drinking styles rather than going for some of the more OTT barrel-aged stuff favoured by craft hipsters. The beers certainly seem popular with locals from the village and surrounding area, given the size of both the beer garden and taproom.


After a quick tour of both old and new breweries and an all too short time in the taproom, we re-boarded our coach and headed back to Den Bosch. Before checking into our hotel, we discovered our hosts had another surprise up their sleeves in the form of a boat ride along the network of canals which ring the city. Some of these canals were defensive, and some were used to bring goods right into the city. Others were used mainly as open sewers, and nearly all the canals pass through underground tunnels at some point. Fortunately, in light of the latte use, the entire network has been cleaned and restored, and nowadays a boat ride, by means of small open, electrically-powered boats is a popular way to discover a hidden part of s-Hertogenbosch.

The tour must have taken the best part of an hour, and afterwards we walked the short distance back to our hotel. I was glad of the opportunity of a shower and change of clothes; particularly after having slept the previous night in the terminal at Gatwick, in order to catch my early morning flight, but suitably refreshed we met up again in the hotel lobby in order to visit the third brewery shown on our itinerary.

This was the Café Bar le Duc, a brew-pub and beer-café, situated right in the historic centre of the city, and just a short hop from our hotel. Here we were shown the compact brewery by owner-cum-brewer Jan van Kollenburg. The business was started by Jan’s father; also called Jan and Café Bar le Duc is still very much a family affair, with the majority of the brewery’s production sold through the bar. The remainder of its output is mainly in the form of bottles, but Jan was quite enthusiastic about a new beer called Jheronimus, produced in honour of local artist Hieronymus Bosch; the medieval painter responsible for such works as “The Garden of Earthly Delights”.

We sampled several of Jan’s beers, before being shown through to a reserved section of the very busy café next door. We enjoyed an excellent meal there, with some more beers from the in-house brewery to accompany the food. As I said, the Café Bar le Duc was packed, and as we left we noticed most of the surrounding bars and restaurants looked the same. Being a warm August evening, many people were sat outside, enjoying some a spot of real “café culture”.

I’m not exactly sure what time we departed but, unlike some of the group who visited another bar or two, I made my way back to our well appointed hotel for a most welcome and much needed appointment with my bed. After breakfast the following morning, the coach turned up to transport us to Amsterdam, dropping us at the Mercure City Hotel for the opening of the European Beer Bloggers Conference. 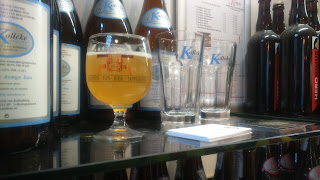 I would like to express my sincere thanks to Nathalie and the rest of the team at Visit Brabant, for their hospitality and for organising what for me, was one of the main highlights of the whole weekend. I am extremely grateful for the opportunity of visiting a part of the Netherlands which I perhaps wouldn’t have thought of doing so. s-Hertogenbosch and the surrounding Brabant region are certainly well worth seeing, and spending some time in, and I highly recommend the area to those people from the UK who want to experience something a little different.
Posted by Paul Bailey at 22:10