As reported earlier this week, I attended Tuesday’s Trade Session at the Great British Beer Festival. I would not normally be concerned about disclosing freebies but, for the record, I gained free entry to the festival by applying for a Press Pass - something any beer writer is entitled to do. Several CAMRA friends I met up with at Olympia, also gained free admission, by tapping up their friendly local publican or brewery rep, which is what I used to do, back in the day.

I stopped going to GBBF on Trade Day several years ago, purely because it seemed to be a glorified “publican’s outing”, but from what I observed on Tuesday, the event has morphed into much more of a “brewers, their workers and supporters” day out, and that can only be a good thing!

The main comment I would make is that the organisers have got the whole event off to a tee. Years of practice, and years of fine tuning, means the phenomenon which is the Great British Beer Festival is a slick, highly polished and ultra-professional event, which runs like clockwork to a well tried and tested formula. I couldn’t fault it at all. There was plenty of seating; something the festival lacked just a few years ago. There was a huge variety of different food stalls, selling all manner of different foodstuffs - essential at an event like this for soaking up all that beer which people imbibe. There was adequate room in which to circulate and, for those of us who remember the greenhouse effect, back in the 1990’s, from that massive glass canopy at Olympia, air-conditioning! Consequently, customers remained cool as did the beer. 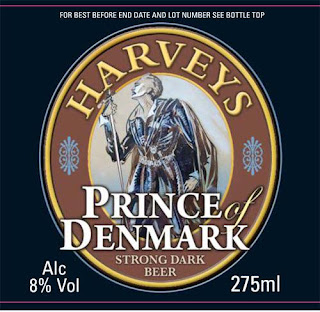 Talking of beer, there was an incredible range of cask-conditioned “real ales” from all over the British Isles, plus a significant number from the United States. There were beers from Belgium, the Czech Republic, Germany, Italy and the Netherlands, as well as a range of bottled beers. For those strange folk who choose to drink fermented apple and pear juice at a beer festival, there were bars serving traditional cider and perry. In short there was something for everyone.

Prior to attending, I made full use of the interactive beer list on the CAMRA-GBBF website, and prepared a couple of personalised “wish-lists”; porters and stouts from UK breweries, plus a number of Italian beers from the foreign beer bar. In the end, none of the latter were available on Tuesday, but I enjoyed the beers I had chosen from the “dark side”. Pick of the bunch was Prince of Denmark; a strong dark and very complex beer from Harvey’s, which weighs in at 7.5% ABV, The beer normally comes in bottled form only, and is rarely found in cask form.

Whilst on the subject of Harvey’s, the company chose the festival as the launch pad for their new-look corporate identity. Simplistic in nature, yet still eye-catching; the company’s mobile bar was decked out in the new décor with its light blue background and silhouette-like designs. I also discovered that after years of restricting sales to within a 60 mile radius of the brewery, Harvey’s now intend to extend their sales area to cover the whole of the UK. Whether this is a good thing remains to be seen, although I must say the thought of their delectable Sussex Best being served using a “sparkler” horrifies me!

So apart from saying I had a most enjoyable day out, catching up with friends whilst sampling some really good beers, that would really be it, were it not for the fact that shortly before 3pm there was a lot of booing and heckling going on in the vicinity of the stage. This was the result of CAMRA’s decision to postpone the announcement of the Champion Beer of Britain award. It’s long been the tradition on Trade Day at GBBF for the results of this contest to be announced, and whilst many CAMRA members were probably aware that the announcement would now be taking place in the evening, at a posh dinner being held at the nearby Hilton London Olympia Hotel, I don’t think that many members of the licensed trade knew about the move.

Consequently there was much dissension, and indeed outright anger in the ranks as the CAMRA spokeswoman charged with announcing the lists of the finalists in each category, but not the overall winners, stood up at the microphone to say her piece. At one point she told them to “Shut up”, as it was becoming difficult to hear what was being said. Fortunately for those who care about such things, the lists were later displayed on a screen, at the side of the stage.

I won’t go into the full details behind this decision here, but there were charges of “elitism” being thrown at the Campaign. The actual reasons for the change are far more mundane, and spring from a desire to combine the announcement of the winners, with the actual presentation of the awards. Previously, the latter did not take place until October; some two months after the festival has ended, so having the brewers present in order to collect their awards at GBBF, probably makes a lot more sense.

Whilst at a personal level, I am totally unconcerned as to which beer and brewery comes out top in this competition, to win such a prestigious award as Champion Beer of Britain is obviously a huge honour for the brewery concerned; especially as it normally results in a rush of orders for the beer. To a point I missed the long-standing piece of theatre which is normally takes place mid-afternoon on Trade Day, and I would certainly not have wanted to be in the same shoes as the girl standing making the announcement and having to break the bad news to that audience of angry publicans. Watch this space, as they say, to see whether CAMRA hails the evening dinner and presentation as a success and presses on with similar plans for next year’s event.

Before summing up, I ought to mention that I didn’t stick exclusively to dark beers at the festival. Much as I like porters and stouts, I reached the stage where I fancied something a little more refreshing; something pale and with a nice hoppy, thirst-quenching bite to it. Lagonda IPA 5.0% from Marble Brewery fitted the bill nicely and shortly after I had a glass of Schlenkerla Helles Lagerbier, brewed by Heller Trum of Bamberg.


Sclenkerla, of course, are famous for their dark Rauchbier (smoke beer), but the Helles doesn't contain any smoked malt in the grist. Instead it picks up its smoky character from the mash filter. Despite having drunk Schlenkerla beers many times, at their classic old tavern in the centre of Bamberg, I have never seen the Helles on sale there. The opportunity to try it at GBBF was therefore too good to miss, and I was not disappointed. The beer was pleasantly refreshing, with a good combination of smoked malt and spicy hop flavours, with a character which belied its 4.3% strength. If you are not into smoked beers, but fancy trying one, then this is the beer to ease you in gently. (See post dated 3rd August).

My friends and I left the festival, some time after 8pm, and travelled back by means of the London Overground to Clapham Junction, and then a train to Waterloo mainline. A short walk across to Waterloo East saw me catching the train back to Tonbridge, but my companions decided to adjourn to the nearby Waterloo Tap, for one final beer. Did I enjoy the event? Yes, of course. Will I be going again next year? Probably, but we’ll have to wait and see.