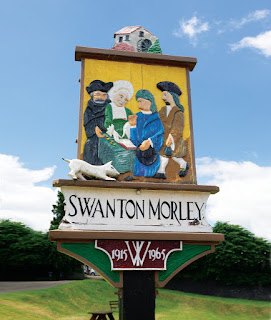 Last weekend was almost certainly my last visit to Swanton Morley; the mid-Norfolk village my parents retired to, nearly a quarter of a century ago, and the place where they spent their twilight years. On balance they were happy years, and it was only my mothers increasing frailty, in recent years, coupled with my father’s advancing Alzheimer’s, which brought their time in the village to an end. My mother sadly passed away 18 months ago, and with dad now living in a nearby care-home it was time to put the family bungalow on the market and say goodbye to 25 years of memories.

It is amazing just how much “stuff” people accumulate over the course of a lifetime, and my parents were no exception. The younger of my two sisters, who lives in nearby Dereham, had begun the process of sorting things out and slowly removing various items, several months ago and then, shortly before her recent wedding, my son and I went up to assist with the disposal of items from the garage and various sheds.

We filled up three large skips, and also made several runs to the local dump, and to various charity shops. Last weekend was the time for moving and/or disposing of large items of furniture, including beds, mattresses, a sofa, bookcases and shelves, plus a dining room table and chairs. The latter came back to Kent with us, using the van we’d hired for the weekend. The bungalow is now completely empty and looking very sad and forlorn.  It was only whilst looking around the place for the last time, and checking everything was secure before locking up, that the sadness finally hit me. It was the end of an era, and with nothing now to take my sisters and I back to Swanton Morley, it really was time to take leave of the village. 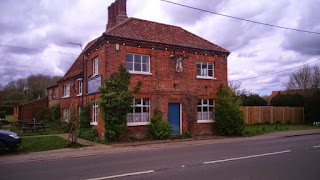 I couldn’t leave though without saying goodbye to at least one of Swanton Morley’s two pubs; so on the Saturday evening, following our return from running various items over to my sisters, my son and I strolled down to the nearby Angel for a bite to eat, plus a few well-earned beers. Fortunately the kitchen was still open, enabling me to order a very nice Red Thai Curry, whilst Matt went for a Chilli-con-Carné with rice and cheesy nachos. Beer-wise, he stuck to Kronenbourg, whilst I set out to sample the pub’s cask beers.

First up was Nethergate Wild Fox (NBSS 3.0); a 4.3% ABV seasonal ale from Nethergate. Nothing special to write home about, but pleasant enough, all the same. This was followed by that old favourite, and a permanent fixture on the bar of the Angel, Hop Back Summer Lightning. This legendary 5.0% ABV golden ale, needs little in the way of introduction, and was in good nick, coming in with an NBSS of 3.5. I was tempted to have another, but I could feel this beer starting to go tp my head, so I slipped back down the gravities to another Norfolk favourite, Woodforde’s Wherry. The latter was definitely beer of the evening and was in almost perfect nick. I scored it at NBSS 4.0, but it could even have come in at 4.5!

I’m pretty certain I found the same with the Wherry the last time I called in at the Angel. It is obviously a local favourite, and whilst it has never been my favourite beer, I could quite easily have drunk it all night last Saturday. I had a brief chat with the landlord before we left. He said that the last hour before the kitchen had shut, was the busiest he pub had been all day (food-wise). I wondered why he seemed so surprised, as surely on a nice warm summer’s day, people are going to want to spend time in their gardens (particularly in a rural area), before wandering down to their local, in the early evening, for something to eat. 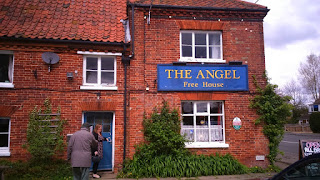 He told me that the Angel’s kitchen was tiny in comparison with that at Darby’s; the pub down the road, but the latter is set up to cater for larger parties; whereas the Angel is much more a locals pub, which attracts the odd bit of passing trade. Apparently the Angel is owned by the same people who own the Victoria, at Hockering, just a few miles back along the A47, going towards Norwich. He told me that because the Victoria was holding a beer festival; something I know the Angel does as well.

Mine host couldn’t stop for long, as he still had a sink full of washing up to finish off, but it was somewhat ironic that on what was probably my last visit to the pub, that was the longest chat I have had with the landlord. It was also ironic that the beer was of such high quality too, as it hasn’t always been quite so good.

So farewell Swanton Morley; I know my parents enjoyed living in the village, and I too go away with fond memories of the place. Next time we are up visiting dad, I fully expect we’ll be staying somewhere closer to Norwich; somewhere with the bright lights and shops to please my wife and son, but also a city with many fine pubs. Until our paths cross again then……………………
Posted by Paul Bailey at 22:44

It's strange and rather sad when you say goodbye to a person or a place, or both, knowing you probably won't see them again, particularly when they have been important to you.

The sign for Swanton Morley look rather fine: do you know what the dates 1915-1965 signify?

The one thing you learn as you grow older Nev is that nothing stays the same. As we evolve we need to learn to accept and embrace change, even though we might not always welcome it. Thank-you for your kind words, though.

I need to look into the dates on the village sign. Something of significance must have taken place in 1915; possibly connected with the First World War? I’m sure good old Google or Wikipedia will come up with the answer.

I can understand how you're feeling, having had to clear out my Mum's house three years ago after she died. In a way, sorting things out keeps you busy and helps you come to terms with things.

The village signs are a distinctive feature of Norfolk.

I really enjoyed the poignancy and detail of that Paul, a very open post.

Your affection for your Son comes through in your weary acceptance of his lager drinking !

I'm glad you're finding good Wherry, a beer I loved 15 or so years ago but rarely find in good form now (due to lower sales compared to lager I think)

Thank-you both Mudge and Martin for your kind words. Clearing out a former family home is never the easiest of tasks, but fortunately my younger sister did the lion’s share, and she was probably far more ruthless than me when it came to deciding what to keep and what to dispose of; who says women are the weaker sex?

As I discovered, the finality only really hits when the place is completely empty, and then it seems as though the person or persons who once lived there have now left no visible trace, (apart from the colour schemes they chose for the interior, or trees or shrubs they may have planted in the garden).

I have vague memories of my parents performing similar tasks when their parents passed on; although a generation or two ago people tended to live in smaller properties and certainly never accumulated as much “stuff” as my parents did, and which my wife and I are both certainly very guilty of. (Especially my wife, who puts Imelda Marcos to shame!) Anyway, the task is now over, and I can look forward to exploring other parts of Norfolk, when I visit dad.

I think my son’s penchant for lager comes about through laziness; that and wanting to appear different from his father. I suppose having been dragged to beer festivals, and real ale pubs, up and down the country from an early age, he was bound to rebel in the end. At least he enjoys decent lager when we visit countries like the Czech Republic and Germany!

I think I’ve been put off drinking Wherry over the years by too many poorly-kept pints, and I suspect you are right Martin that much of this is down to trying to compete against an overwhelming tide of lager in many pubs. As I discovered though, when it’s on form, it’s excellent, and definitely a good beer to have a session on.