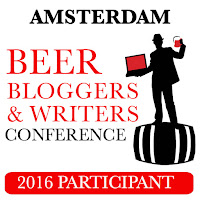 I’m off to Amsterdam on Thursday morning in order to attend this year’s European Beer Bloggers & Writers Conference. This will be my third such event in a row, and after several hectic month’s at work, it’s something I’m really looking forward to.

Thursday's trip will be my first visit to the Dutch capital in over 40 years, as it was back in 1975, as a quiet and slightly introverted student, that a friend and I made Amsterdam the first stop on our month long Inter-Rail journey around Western Europe. Back then we stayed in the city’s Youth Hostel; a very relaxed and civilised affair, and a complete contrast to the strict and rather regimented hostel we stayed at in Hamburg – the next stop on our itinerary.

This time round I’ll be staying in the four star luxury of the conference venue; the Mercure Hotel Amsterdam City. How times have changed, and I bet this time round I don’t get approached by people asking “Any hash, man?” Even back in 1975, as a long-haired twenty year old, I was far more into beer than funny cigarettes; in fact I could count on one hand the number of times I have indulged in the latter.

Amsterdam in the mid-70’s was all Heineken and Amstel, but the constraints of travelling on a limited budget with a half-dozen or so countries still to visit, meant beer was something of a luxury, and a couple of 33cl glasses of an evening, was about all we could afford; that and a paper cone full of chips, sprinkled with salt and covered in mayonnaise - I can still picture them now after all these years!

Like many European capitals the beer scene in Amsterdam has changed out of all recognition with over 20 breweries now challenging the hegemony of Heineken and Amstel, plus dozens of specialist beer cafés in which to enjoy them. To guide me, I’ve a copy of Tim Skelton’s excellent “Around Amsterdam in 80 Beers”, but on a wider scale I’ve also got the same author’s “Beer in the Netherlands”; a comprehensive guide to the Dutch brewing and pub scene.

My Dutch experience kicks off mid-morning on Thursday, with the pre-conference excursion to the southern city of Den Bosch – famous as the home of the medieval artist Hieronymus Bosch; painter of those rather disturbing religious paintings depicting hell-fire and eternal damnation!

Our party will be visiting the city for much more pleasant purposes though, as the excursion includes lunch, dinner, a short bike ride, a canal tour plus three private brewery tours and tastings including a visit and tasting at the Koningshoeven Brewery of La Trappe. An evening pub crawl is also featured, for those of us who are staying in Den Bosch.

After an overnight stop, we return to Amsterdam on Friday morning for registration and the beginning of the conference proper. If this year’s event is anything like the previous two there will be lots of interesting beers to sample, good food to  accompany the beers and, most importantly, some good company, with delegates drawn from all over Europe and North America.

There will be a number of presentations, and discussions, which include topics such as the Past, Present, and Future of Brewing in the Netherlands; Will Takeovers Threaten Diversity in the Beer Industry? Plus The Secret History of Pale Ale. There will also be a Multi-Sensory Workshop on Beer Flavours, plus a session on Beer Photography.

On the Friday evening, we’ll be visiting the town of Haarlem; just 20 minutes away from Amsterdam. The city is not only known for its glorious history, but also for its small community atmosphere, multitude of art and culture and cosy restaurants and cafés.The city's only brewery, Jopen Beer is hosting conference attendees for a tour, tastings and beer dinner on Friday, August 19th at the Jopen taproom and then the Jopen Church in Haarlem.

On Saturday evening, we’ll enjoy a beer dinner hosted by Pilsner Urquell who, for the sixth consecutive year, will be sponsoring the conference. We’ll also again have the chance of meeting with the company’s legendary Brewmaster, Vaclav Berka.

Finally, on Sunday, a post-conference excursion will take us to Bodegraven, home of the renowned Brouwerij De Molen for a private tour, tastings, and a lunch.

I’m not flying back until Monday evening, so have earmarked the day for sightseeing around Amsterdam. A visit to the Rijks Museum, to see some of the Rembrandts and possibly a look in at the Van Gogh Museum, followed by a canal trip should just about touch the surface of the city’s cultural offerings, but then a spot of lunch, plus a few beers at a couple of Amsterdam’s legendary “brown cafés”, should round the afternoon off nicely. Then it's back to the airport of the flight home.

There will obviously be lots to write about, and as this time I am taking a laptop, I may manage the odd brief post from the conference; if I can tear myself away from all that beer! Here’s to a successful trip.
Posted by Paul Bailey at 23:24

Hi Paul,
If you have time you must visit here.You will not be disappointed.
www.arendsnest.nl

Looks an interesting place,Stanley. Not sure if I'll have time to check it out on this trip, though.

Just to let you know Stanley, I've just got back from visiting Arendsnest. You were right, and I was certainly not disappointed. Around 50 beers on draught, and all of them from Dutch breweries.

It was nice enough to sit outside for the first part of the evening, but it was equally nice inside, with friendly and knowledgeable staff, a good mix of people and a fine old interior, which looks as though it hasn't been touched in ages.

Hi Paul,
Absolutely delighted you could make it.It really is a wonderful place to while away the odd hour or two and just sufficiently close enough to quickly get away from the tourist maelstrom.
Next time you go I'll suggest four or five more places to make up a day long pub crawl without straying far from your hotel.
Funnily enough I prefer Amsterdam in the winter when it's much quieter and ideally suited for walking all day.
And it makes for a perfect place for a weekend break.