North Brabant, or just Brabant as it is often referred to, is a province in the south of the Netherlands. It borders the Dutch provinces of South Holland and Gelderland to the north, and the Belgian provinces of Antwerp and Limburg to the south. It takes its name from the early medieval Duchy of Brabant, which itself was a constituent state of the Holy Roman Empire, but subsequent wars, religious squabbles and political upheaval, led to the southern part of the former Duchy ending up as part of Belgium.

As if to compensate, parts of two neighbouring provinces were assigned to modern day Brabant, but like much of this part of Europe, constantly changing borders, as a result of historical events, mean this is all the history you are going to get from me. Of far more importance is the pre-conference excursion to Brabant which 15 other beer writers and I undertook the day before the 2016 European Beer Bloggers Conference kicked off in Amsterdam. 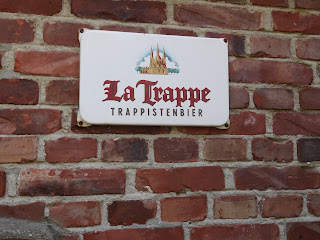 The excursion was organised by Visit Brabant, the tourist agency which looks after this province of the Netherlands, and they certainly pulled out all the stops to make us feel welcome and to show off this attractive and inviting area of the country. The excursion included an overnight stop in the historic city of ‘s-Hertogenbosch; normally abbreviated to Den Bosch.

Most of those booked on the excursion, were brought in from Amsterdam by coach, but several others had either arrived the night before or, like me, had journeyed by train direct from Amsterdam’s Schiphol Airport. So, after catching the first flight of the morning from Gatwick, I was relieved to take my seat on the train south, and enjoy the ride through the Dutch countryside, which was looking its best in the bright, mid-August sunshine.

After an hour and a quarter, my train arrived at ‘s-Hertogenbosch shortly before 10.30am. It was already quite warm out, but with the aid of a pre-printed Google Map, I was able to find my way through the streets of this attractive city, to the Hotel Golden Tulip, which was going to be our base for the night. Here in the lobby, I met up with some of my fellow conference attendees, as well as Nathalie Verdult; the representative from Visit Brabant who had organised the excursion, and the lady who would be looking after us during our stay in the province.

I was able to check into the hotel and to leave my suitcase there, as we waited for the coach to arrive from Amsterdam, with the rest of the group. We then boarded the coach and travelled out of ‘s-Hertogenbosch in the direction of Tilburg. Our first stop of the day was the Abbey of Koningshoeven at Berkel-Enschot; home to the Dutch Trappist Brewery of La Trappe. 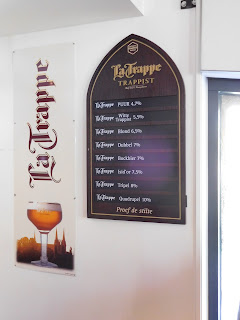 Koningshoeven is one of just two Trappist breweries based in the Netherlands, out of the 11 currently in existence world-wide. The abbey is home to a community of 16 Benedictine monks, and as well as brewing beer it also produces cheese. Brewing began at Koningshoeven back in 1884, as a means of financing the monastery, and whilst the monks originally produced the beer themselves, it eventually became necessary to obtain outside commercial assistance.

Today the brewery is a subsidiary of the Bavaria Brewery(the second largest brewing company in the Netherlands, after Heineken), although the buildings and brewery equipment remain in the ownership of the abbey. The monks retain the ultimate authority over the brewing process, while Bavaria manages the commercial business. Nine beers are produced in total, although a number of them are seasonal brews only.

Three rules apply in order for a beer to be designated as a “Trappist”.

1. The beer must be brewed within the walls of a Trappist monastery, either by the monks themselves or under their supervision.

2. The brewery must be of secondary importance within the monastery and the business practices it adopts must be commensurate with a monastic way of life.

3. The brewery should not be a profit-making venture. The income generated should cover the living expenses of the monks along with the maintenance of the buildings and grounds. Whatever remains should be donated to charity for social work and to help persons in need.

We were ushered into a room within the visitor complex, and after being welcomed by Tom, our tour guide, we were given a beer to each to keep us going. I went for the 7.0% Dubbel; a beer I am very familiar with, but it was nice to drink it within the confines of the abbey walls where it is brewed. We were shown a short film about the abbey, and Trappist beer in general, before Tom led us away for a look around the brewery.

Tom is one of several lay people who work for the brewery, and was both amusing and, at times, rather loud. He kept us entertained as he told us some of the history of Koningshoeven, and explained how La Trappe beers are produced. The brewery was modernised and expanded, back in 1990, but the older plant is still there for visitors to admire.

At the end of the tour, we adjourned to the shady beer garden, next to the visitor centre, for a lunch of local ham, cheese, salad and bread rolls. More beer followed in the form of a 7.5% Isid’or beer for me, whilst other s went for either the 4.7% Puur (a pilsner-style beer), or the Witte Trappist 5.5%, wheat beer.

The garden was crowded with visitors, most of whom appeared to have arrived by bike. Afterwards it was our turn to cycle, although those who preferred not to were transported to the next destination by coach. I am still a fairly regular cyclist, so I was definitely up for a bike ride; as were the majority of the party.  However, when we were shown the sit-up-and-beg utility bikes, with no brakes on the handle bars, I almost had a change of heart.

There were brakes, of course, but in order to bring the bike to a halt you had to pedal backwards. This took a bit of getting used to, but on the plus side, each bike had three gears. As the Netherlands is one of the flattest countries on earth, the gears were only of use for accelerating away at the start, and if you wanted to put a bit of a spurt on. So with tour guide Nathalie leading the way, we set off to cycle to the village of Oirschott; our next port of call.