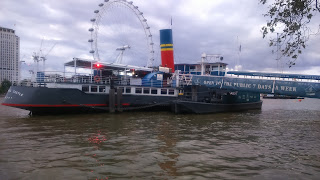 I actually enjoyed the pre-Great British Beer Festival Party, organised by the British Guild of Beer Writers, a lot more than the main event. Held the night before, on the Tattershall Castle, a converted former river ferry moored on the Thames just off Victoria Embankment, the ship proved the perfect setting for this annual get together of beer writers and bloggers.

I travelled up to London straight from work, my train terminating at Charing Cross, which is conveniently just a short hop from the Embankment. I walked down towards the river, boarded this attractive old steamer and found my way to the rear (stern?) of the vessel, which had been reserved for the BGBW event. 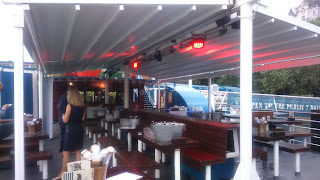 There were quite a few people there already, so after checking in I wandered over to one of several beer taps, and poured myself a beer. My first choice was Brick Field Brown 5.4%, a tasty brown ale from Five Points Brewing. I spotted a couple of people I knew, so I went over and joined them. I am not going to list out all the writers and bloggers present whom I either knew or recognised, but a mention should go to Peter Alexander (aka Tandleman), Ed Wray, BryanB, Steve Lamond and Matthew Curtis. Matthew deserves a special mention, as he was the inspiration and driving force behind this year’s event, having organised and set everything up for the evening, in conjunction with the London breweries whose beers I have described in this post.

From memory there were around four self-serve beer stations, each fitted with two taps.  The beer of course was “craft keg”, but was none the worse for that, and the fact the beers were served chilled was most welcome on what turned out to be a rather hot and humid evening. 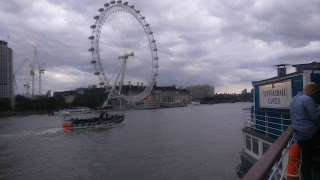 It was very warm down below, so Peter and I headed upstairs, to the open deck at the stern. From here we could see along and across the Thames including an uninterrupted view of the London Eye, which is virtually opposite where the Tattershall Castle is moored.

There were plenty of bottled beers available upstairs; all nicely chilled in ice-buckets, and with nice clean chunky tumbler-type glasses stacked in front to drink them from. I was really impressed with the Battersea Rye from Sambrooks, but there were also a number of larger bottles from America, including some from one of my favourite North American brewers, Rogue. Peter had a particularly cloudy beer called Bogan; a collaboration brew between Gipsy Hill and Three Boys breweries, which was described as a New Zealand Pale Ale. He said it tasted alright, but it added a whole new dimension to the phrase “London Murky”! 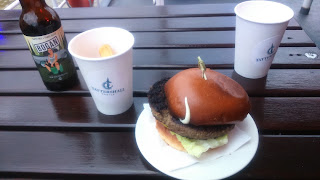 It wasn’t long before the majority of people from downstairs migrated up to join us. I imagine they either realised it was too hot down below, or they’d got wind of the imminent arrival of some food. This came in the form of beef burgers; “burgers to die for” was how I’d describe them, as they were absolutely scrumptious, with well-cooked tasty beef, plus nice chunky gherkins and tomato. Chips, in paper cups, formed the perfect accompaniment.  Later on, when the serving staff brought another round of burgers along to us, I couldn’t resist grabbing a second helping. My excuse was the food helped to soak up any excess beer!

Towards the end of the evening, some of us went back down below deck, to have a crack at some of the keg-stuff. I enjoyed a very nice Alt-style beer from Orbit Beers, called Neu, plus a smooth and tasty 8.8% Imperial Milk Stout from The London Beer Factory. 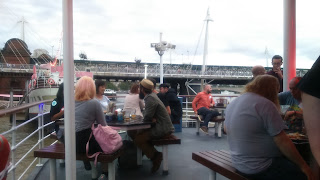 I drifted off shortly before 10.30pm and wandered back up to Charing Cross for my train back to Tonbridge. I fell asleep on the journey home; not so much because of the amount of beer I’d drunk, but more from the effects of the busy weekend I’d just had up in Norfolk.

It was an excellent evening, made all the better by the setting, the people, the food and of course the beers!  I would like to thank Matthew Curtis, the Guild and event sponsors, Cask Marque.


Footnote: So why did I enjoy the Guild’s party better than the Great British Beer Festival itself? The answer’s simple; the size. There’s no denying GBBF is awesome - as the Americans would say, but for me the event is just too large, and too busy.


I prefer somewhere smaller and more intimate, and the party onboard the Tattershall Castle was just the right size. The event afforded the opportunity to mingle and socialise, without feeling part of some gigantic merry-go-round. It also allowed me to taste and enjoy some stunning beers, of the sort which just wouldn’t be available at GBBF, as they are served by non-CAMRA approved methods.

Don’t get me wrong, I think CAMRA do a fantastic job each year in putting on this flagship festival, which showcases the very best British cask-conditioned ales, plus some excellent beers from abroad, but these days I prefer something a little quieter and a lot less hectic.
Posted by Paul Bailey at 22:13

Really glad you enjoyed the event Paul, thanks for coming!