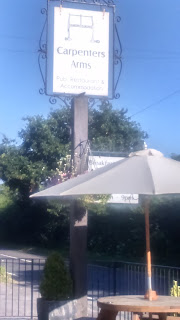 It’s said that people don’t notice things on their own doorstop, and this is often true when it comes to pubs. People will sometimes travel miles to drink, missing out on the fact there’s quite often something equally as good closer to home.

The Carpenters Arms, in Three Elm Lane, isn’t exactly on my doorstep; in fact it lies just off the Hadlow Road in a rural setting on the northern fringe of Tonbridge. However, it’s a pub I don’t visit that often, being too far to walk to from my house; although it is just a short hop from the nearest bus route.

My wife and I took a taxi out to the Carpenter’s last Saturday evening. One of the building firms she does book-keeping for were hosting a summer get-together for their workers, so Eileen and I were invited along. I had driven past the pub many times during the 30 plus years I have lived in Tonbridge, but for some reason had rarely ventured inside.

This may have been due to the Carpenter’s having once been a Courage pub; or it may just have been due to the fact it was always a place we passed en route to somewhere else, and never a destination in its own right. I knew a lot of money had been spent on the place; in fact I remember a customer telling me, back in the day when we had our off-licence, that it was a decent place to go for both food and drink, but as I just said, it was never somewhere to stop off at. 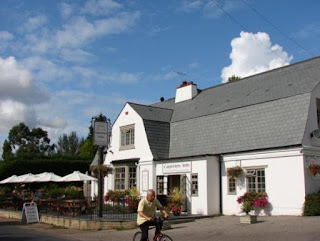 Well I have to see we were both really impressed with what we found after the taxi had dropped us off, as the pub has a Tardis-like interior, which has been tastefully fitted out in a style which is just right and not over-powering. We were the first couple to arrive, so we grabbed a drink, before going to sit outside on the front terrace, which had been reserved for our party.

After a baking hot afternoon, it was just right sitting outside under the shade of the large, square parasols as we waited for the rest of the group to arrive. My beer (Harvey’s Sussex Best) too was nice and cool. The other cask ales were rather safe and predictable, in the form of Greene King IPA, Old Speckled Hen and the dreaded Doom Bar; but the pub did have keg Brew Dog Punk IPA on tap.

I was tempted to try a pint, but with a strength of 5.5% ABV, combined with a long evening ahead and an open tab behind the bar, I decided it would not be a good idea. A couple of other guests did try it though, and reported it was very good.

As well as plenty of decent beer (Harvey’s), there was plenty of decent food to go with it, in the form of mini-burgers and those posh fresh-cooked scotch eggs, with the bright yellow yolks that are so beloved by all trendy craft-beer bar owners, and their hipster customers. There was also a really nice platter of salade niçoise, which went well with the rest of the food.

It was nice to meet with Eileen’s boss, his wife; the company’s associated workers and sub-contractors. They seemed a good down to earth bunch with a number of real characters amongst them, and keen to let their hair down, metaphorically speaking. 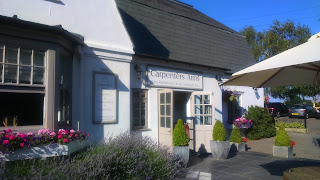 We left sometime after 11pm, after Eileen had persuaded our son and his friend to pick us up. It had been an excellent evening, with good beer, good food and good company. We also discovered that the Carpenter’s Arms is well worth a return visit, which we plan to make in the not too distant future.

It is also worth noting that the pub offers accommodation and also serves breakfasts which, looking at the menu, are very reasonably priced. I gather booking is essential; especially at weekends.

Footnote: The Carpenter’s Arms is constructed in a rather unusual “Dutch Barn” style. Whilst sitting outside the other evening I realised that the building reminded me of another similar pub at the other end of the county; the World’s Wonder, in the village of Warehorne, on the edge of Romney Marsh.

A spot of research revealed that the latter pub was rebuilt in this rather distinctive style in 1932, by the former Maidstone brewers Style & Winch. The new building replaced the two old cottages, which had formerly housed the pub.

The former Bell Inn, at Coxheath – to the south of Maidstone, was another pub constructed in this “Dutch Barn” style. The pub is now a curry house, but the distinctive style of the building is still very evident.

Style & Winch were bought by the London brewers, Barclay Perkins shortly before the Warehorne pub was rebuilt, but the company continued brewing their distinctive “Kentish Farmer” brand beers until well into the 1950’s when Barclays merged with their Southwark neighbours, Courage. The Maidstone Brewery then switched to producing Courage beers, until its closure in 1966.

The site was used as a bottling and distribution site for a further decade, before the whole area was redeveloped to make way for a second road bridge over the River Medway. I can just about remember the old brewery, during its last years of existence as a bottling plant.
Posted by Paul Bailey at 21:40

Lovely piece. Those scotch eggs work for me if they're warm and runny inside, otherwise seem very overpriced !

Glad to see you're putting your son to good use as a taxi for Dad.

The yolks in the scotch eggs were just off being runny, but they were very nice. As someone else was paying for them, they were even better, but I would agree Martin, that they are generally over-priced; especially in trendy, designer craft-beer bars.

Matt is still earning to drive, so it was his friend who picked us up. Very welcome though, especially as the taxi firm told us there were no cabs available until 12.30 am!

On a completely different subject I see fuggles have put an application in to convert 165 Tonbridge High Street - presumably into a beer cafe?

Check out the TMBC planning site

That’s correct about Fuggles, Evan and definitely good news for Tonbridge. I will be writing in support of their application; as, I’m sure, will many other town residents, along with local CAMRA members.