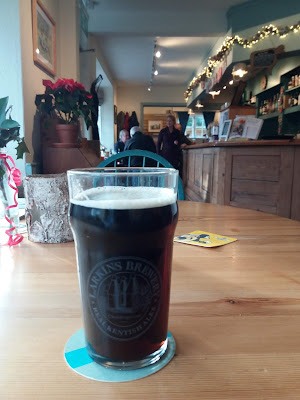 Well, six weeks from the date it was first released, I finally managed to track down some Larkin’s Porter, and now, having drank and really enjoyed a pint of this excellent winter beer, I can feel smug and content, secure in the knowledge that this harbinger of winter is as fine a beer as it ever was.

My "porter salvation" occurred at the Greyhound, Charcott, just up the road from where I work, and a pub I pass on an almost daily basis, whilst on my routine lunchtime walk. I took the trouble of phoning ahead first, and was pleased when my question as to whether the porter was on, was answered in the affirmative.

So come lunchtime, I headed off in my usual direction, up the road know locally as Camp Hill, towards Charcott. The recent heavy rain meant the road was more like a mountain stream than a thoroughfare, but that didn’t seem to stop the lunatics in their 4 x 4’s speeding along like there was no tomorrow. 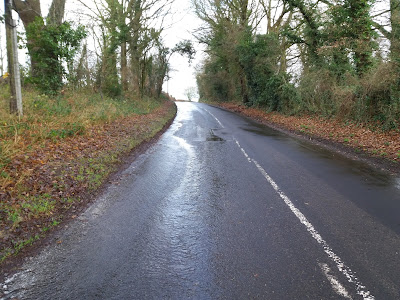 With a raging torrent running down the margins of the road, there was not the usual space for me to step aside as close to the verge as normal; not without getting my feet wet, so my message to those who feel compelled to drive like Lewis Hamilton, please slow down and give some consideration to pedestrians! The fields at the top of the hill, looked like a scene from the Kevin Costner film  Waterworld, but that’s not unusual for this time of year.

I arrived at the pub around 1.15pm. It wasn’t packed, but trade seemed to be ticking over nicely, with a good mix of drinkers, plus a handful of diners. It’s been a while since my last visit, as not only have I been trying to keep my fitness levels up with my regular walking schedule, but I have also been shying away from a lunchtime drink. This is mainly because I want to stay awake during the afternoon, rather than dosing off. 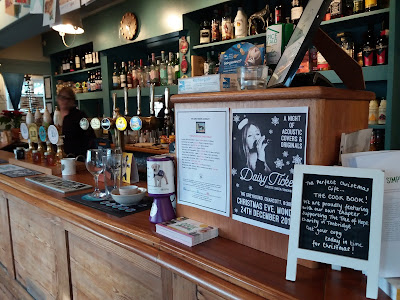 However, with just two and a half days to go until the eleven day Christmas shutdown, and the manic workload slowing down, at least until the New Year, I felt I could afford to push the boat out – especially when there was a pint of porter waiting for me. Landlady Fran welcomed me and, in recognition to my earlier phone call, told me that the porter was going well. She said that the current cask was the third one the Greyhound had sold this season.

The beer pulled up well and was looked really inviting in the glass. Given its 5.2% ABV I wasn’t concerned at having to pay £4 for a pint, as in my book it was worth every penny. After expressing my satisfaction, I found a seat in the right hand front corner, asking first if I could share the table with a chap sitting on his own and his remarkably well-behaved spaniel. 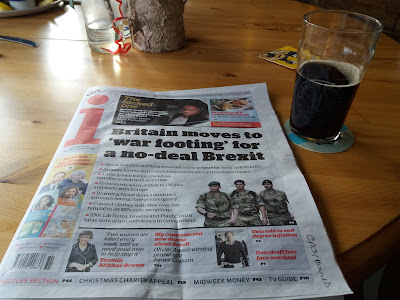 My table mate had his head buried in a newspaper, so with little in the way of conversation from him, and Fran and her helper behind the bar busy serving drinks or taking food orders, I picked the other paper up from the rack.

You can see the headline from the photo and whilst much of this is just political manoeuvring and playing to the gallery, I couldn’t help wondering how a wealthy and highly respected country like the UK,  got itself into such  a sorry mess? It surely is unprecedented for a country to be voluntary adopting such measures during peacetime, and for what?

I turned the page in search of something more cheerful, but apart from yet another famous football manager getting the chop, there was little of real interest. It made me realise why I never bother wasting money on a newspaper, so I attempted to make friends with the dog who was hiding under the  table. 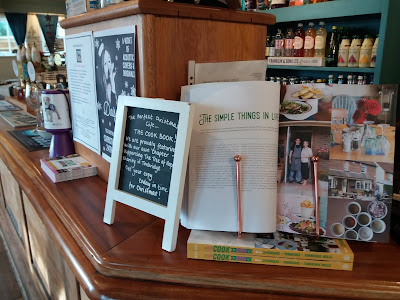 The arrival of its owner’s food put paid to that, as my canine friend rapidly revealed where its true interest lay. I sat there, in quiet contemplation, enjoying my glass of Larkin's Porter. The beer was a smooth as silk, with a blend of rich roasted coffee and chocolate, balanced by a pleasing, and refreshing hop bitterness. I scored it at 3.5 NBSS.

All too soon it as time to go. I wasn't tempted to stay for another, even if time had allowed, as the pint I had was just right. I retraced my footsteps, back down the very wet Camp Hill, and was at my desk, just before 2pm.  As well as enjoying an excellent pint, in an attractive country pub, I also managed to clock up just under 1.2 miles on the walk there and back.

I may make a return lunchtime visit to the Greyhound on Friday, seeing as it's our last day at work, but we shall see.
Posted by Paul Bailey at 21:28