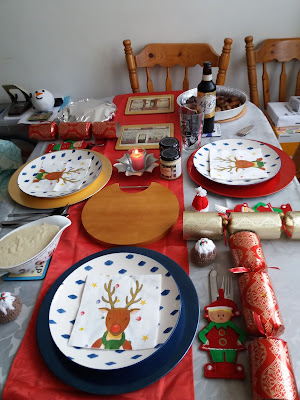 The time between Christmas and New Year (Twixmas), is always a slightly strange one. I have an enforced lay-off from work, as my company shuts down from Christmas Eve until New Year. It’s not as if they carry out any maintenance or other essential work, but close it does and staff have to keep back 3-4 days, depending on how the Bank Holidays fall, from their annual leave to cover this.

Apart from the obvious Christmas celebrations, I like to use this free time wisely, and in the past used it to take a short European city-break. This was normally to a destination in Northern Europe; so it was somewhere cold, but somewhere very atmospheric and Christmassy. I ceased this practice six years ago, after my parents' health began to decline. Instead, I would spend a few days with them, up in Norfolk. 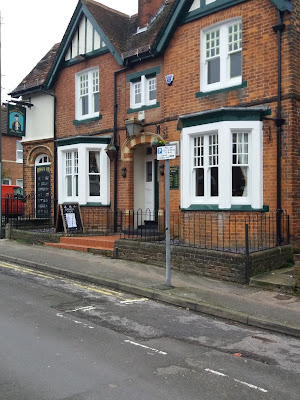 With mum's passing, and dad moving into a care home, that's all gone by the board, but in view of the recent trials and tribulations affecting travel over the Christmas period, I'm rather pleased this festive season, not to be going anywhere. So with the first three days of Christmas now over, and my return to work not scheduled until the 2nd January, there are still six days of the holiday remaining.


I took a stroll down into Tonbridge earlier, leaving my wife and son indoors. I was starting to get restless after a day sitting around doing nothing, and needed to get out of the house. It wasn't quite a case of suffering from “cabin fever”, but it was getting fairly close.

The town was quiet, the main car parks less than half full and the shops I passed almost devoid of customers. People were either still at home, tucking into their leftover turkey and "bubble & squeak", or they were all up in Oxford Street, at the January sales; they certainly weren't in Tonbridge spending their money! 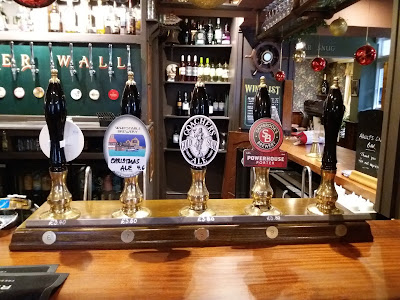 I took a walk through the sports-ground, my aim being to make a beeline towards the Nelson Arms. I wasn't sure that it would be open, and I didn't even really fancy a drink, but I thought I ought to pop in and see how licensees Matt and Emma were getting on; after all it had been some time since my last visit.

Apart from the dog walkers, and the family groups congregating around the swings, the sports-ground was quite empty. With the sky overcast and a light drizzle in the air, it wasn't the most of pleasant days to be out and about, but I expect the majority of people i passed were, like me, just glad to get out of the house for a while. 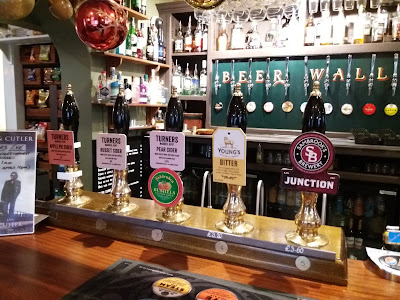 I made my way along to the Nelson. There were some lights on inside, so I turned the corner and gingerly tried the door. To my surprise it opened, but on stepping inside, instead of finding a pub full of customers, there was just a small group of people sat around a table in the "Public Bar" area, with several dogs at their feet. One of the group stood up to greet me and I immediately recognised him as Matt the landlord.

He told me the pub was actually shut, and him and the other members of his family I could see were off for a walk over to Hayesden Lake. I apologised for disturbing them, but Matt said it was fine and invited me in for a quick drink. Not wishing to delay the walking party I asked for a swift half, which Matt kindly gave me on the house. Sambrook's Powerhouse Porter 4.9% ABV, my choice of tipple was excellent and a definite 4.0 NBSS. 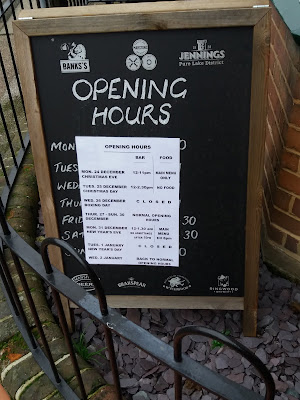 Matt had another Sambrook's beer on tap, in the form of Junction 4.3% ABV, which is a reddish-coloured "premium ale".  Matt said the beer was going well, but another of his beers is also proving to be a surprise best-seller. Goacher's Gold Star 5.1% ABV, had originally been supplied to the Nelson in 4.5 gallon pins (Matt takes quite a few beers in this size of cask, whenever possible), but sales took off, and Gold Star is now stocked in the much more usual 9 gallon firkins.

As stated above, I didn't stay long, as I didn't want to delay the dog-walking party. I also thought that Matt's family would be thinking that a publican's life is never his own, even when his pub is supposed to be closed. Boxing Day, was just such a day; as I would have realised, had I read the "A" board outside, which clearly displayed the Neslon's opening times over the Christmas period. Talk about, "Should have gone to Spec-Savers"!
Posted by Paul Bailey at 11:13

This kind of thing also makes pubs the wonderful places they are. I can't even imagine this happening down here in any bar, nor any barman going to his working place with family and dogs for enjoyment. Cheers Paul!

"and staff have to keep back 3-4 days, depending on how the Bank Holidays fall, from their annual leave to cover this."

No offense but that's a bit ironic compared to most of those in retail who can't take any time off over the holidays. ;)

"Instead, I would spend a few days with them, up in Norfolk."

Again, no offense, but going to Norfolk from Kent is a bit like going to a place in Europe that's a bit colder. ;)

"but in view of the recent trials and tribulations affecting travel over the Christmas period, I'm rather pleased this festive season, not to be going anywhere."

My sentiments exactly. We've travelled both by air and by car during the holidays on and off over the past few years. Quite happy just to stay at home for a change.

"which Matt kindly gave me on the house."

"but another of his beers is also proving to be a surprise best-seller. "

"Talk about, "Should have gone to Spec-Savers"!"

In a similar vein my wife is starting to do catering for a number of school principals in the area. They initially call her business number but she requests they contact her personal cell directly after that as the business phone is tied to our lunch truck and the mobile POS machine. You wouldn't believe how many don't listen to her voicemails (or read her texts!) and still call the business number. :)

The surprise hit is the Goachers, which I'd probably go for as the local beer. No apology for not seeing the A-Board, Paul; it's increasingly rare for pubs to post opening times outside (1 in 10 I reckon) and Boxing Day is a day you'd expect to see a pub open. Good to see the Nelson doing well.

Hi Joan. I think Matt must have chosen the pub as a convenient place for the family to meet up, prior to their walk. It’s en route to the lake and country park they were heading for. I did think that Matt and his family lived at the pub, but apparently not.

Good to hear from you, Joan. Trust all is well with you and that you had a good Christmas.

Hi Russ. I think folk from Norfolk might take exception reading that a visit to their county is like a trip to Europe. They’re not that foreign there, you know and many of them were foolishly in favour of Brexit.

Thanks for pointing out the mix-up with the text. Blogger strikes again, and I didn’t have time to read it after I posted the article, as we were going out. All duly corrected now.

Finally, people not paying attention is commonplace. Also people often see what they want to see, and not what is actually there.