The calm before the storm? Or all quiet on the Tunbridge Wells front 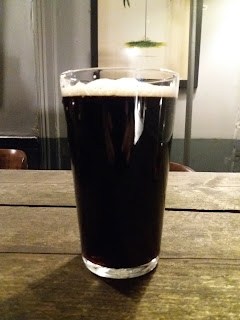 As you might have guessed, I didn’t manage to track down any Harvey’s Old at the weekend, and neither did I manage to source any Larkin’s Porter, although by all accounts I came pretty close.The truth is there was too much occurring on the domestic front, and this was enough to keep me out of the pub.

Tuesday evening saw me catching the train over to Tunbridge Wells in order to catch up with some of my CAMRA colleagues who were on an extended “Christmas Drinks” pub-crawl. As most of them are retired, they started at 5.30pm, but that was way too early for us ordinary folk who are still working, so I caught up with them at the last port of call.

Actually, they caught up with me as they were running behind schedule, as is so often the case on these sort of events. So having missed out on the Royal Oak, the Guinea Butt and Fuggles, I made my way to the top of Mount Ephraim and bought myself a well-earned pint at the George; this year’s West Kent CAMRA pub of the year. 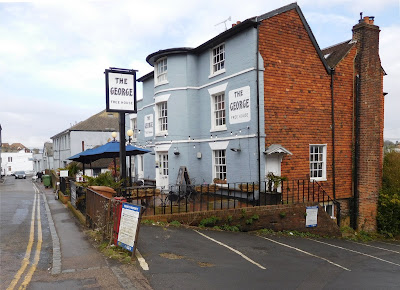 It’s some time since I last set foot in the George, but the pub was looking suitably festive and with a log fire providing some welcoming warmth on a cold winter’s night, I could think of few better places to be. My only grouse was the two drinkers, sat at the bar, blocking my view of the pumps, but even that changed when they disappeared outside for a ciggy.

There was an interesting line-up of beers, including two dark ones, but for starters I opted for a pint of  “Pint” from Manchester-based, Marble Beers. Weighing in at just 3.9% ABV, this session ale is packed full of citrus flavours from the use of American and New Zealand hops, and I scored it a worthy 4.0 NBSS. 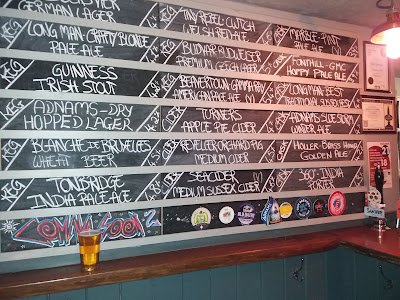 I sat down away from the bar, and towards the front of the pub. It was fairly quiet, but then it was only Tuesday and the Christmas festivities haven’t really kicked off yet. You could almost describe it as the calm before the storm, and as I sat there I felt content and nicely relaxed.

The peace was shattered by the arrival of my CAMRA friends and colleagues, so I made my way towards the bar to greet them. They had a similar tale to tell, as the other three pubs they’d been in were all on the quiet side. Whilst standing at the bar chatting, I was trying to make up my mind as to which beer I should have next; a decision which basically meant I could  now dive in on the dark stuff. 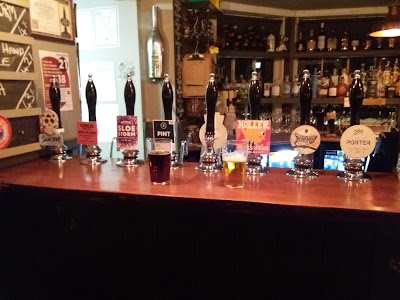 A friend had bought himself a pint of Adnam’s Sloe Storm Winter Ale, and offered me a taste. Coming straight after the Marble Pint, the Adnam’s offering tasted rather insipid; you certainly couldn't taste the sloes,  so I gave it a miss and opted instead for the Holler Brass Hand – a 4.2% ABV Golden Ale. Holler are based in Brighton, having moved there, having outgrown their original premises in Uckfield.

The Brass Hand was very drinkable (3.5 NBSS), but on balance I preferred the Pint. By this time the CAMRA contingent had grabbed one of the large tables, close to where I’d been sitting earlier. It was good to see them, and it was equally good to  catch up with a friend who’d been away in Australia for the past month. He was definitely feeling the change in climate between here and Oz – not that I had much sympathy for him! 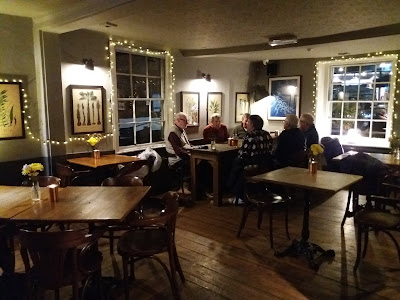 I learned from one of my other friends that I had narrowly missed Larkin’s Porter, as it had been on at the George over the weekend. “Fancy not saving me any”, was my response, but this did give me the cue to try the other dark offering on at the George that night.

Export India Porter from 360º Brewing; another Uckfield based brewery.  This 5.8% ABV beer has a strong malt base supplemented with oats for both body and smoothness. Three aromatic New World hops produce a Porter which, according to the brewery, “Is strong on body, big on aroma and large on taste”.  It was good so, as with the first beer, I scored it at 4.0 NBBS. 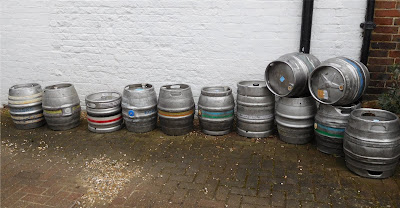 It wasn’t a beer to rush either, so it was gone 10.15pm when my friend from Tonbridge and I left the pub to make our way to the station. It had started raining, only lightly, but it did at least raise the temperature. Unfortunately our train to Tonbridge was delayed by 30 minutes, which meant by the time I arrived home it was 11.30pm.

This wasn’t good, with work the next day, but this minor irritation aside, it had been an excellent evening. Having been tempted now by the dark stuff, I  just need to find a pub serving either Larkin’s Porter or Harvey’s Old and I shall then be a really happy bunny.
Posted by Paul Bailey at 13:01

An interesting post, Paul, and one that highlights how hard it is to find the things we used to take for granted, like dark beers at Christmas or that a beer you liked last week will still be there this week.

I liked the George, but that does look a lot of beers to maintain quality.

Martin, not being able to find a beer in a multi-pump pub, that you enjoyed the week before, is extremely frustrating and an example, if one was needed, that too much choice can often mean less.

There were five cask beers on sale the other night at the George; the other two were reserved for cider. The three which I tried were all in good form, but I know of other pubs where this often isn't the case.

As an aside, I'll be checking out the newly opened Beer Seller in Tonbridge, over the weekend. From the reports I've seen, there's quite a few beers on sale there, so we will have to see whether they can maintain the quality over the entire range.