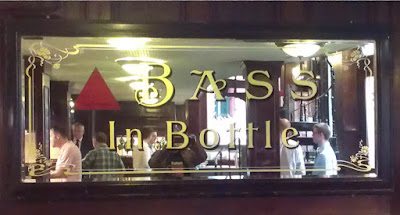 Carrying on from the first part of this narrative, we move into the 1980's and see how after losing its way and ditching much of its heritage, Draught Bass made a bit of a comeback and even recovered some of its former glory.

It was to be  nearly ten years before I returned to Burton. During the intervening years I had changed my job twice, moved house three times, got divorced and re-married. The fact that my moving house had brought me back to Kent (first Maidstone and latterly Tonbridge) meant that opportunities to consume Draught Bass were not as frequent as they were in London. However, the Man of Kent in East Street, Tonbridge always managed to serve a very acceptable pint of the stuff! 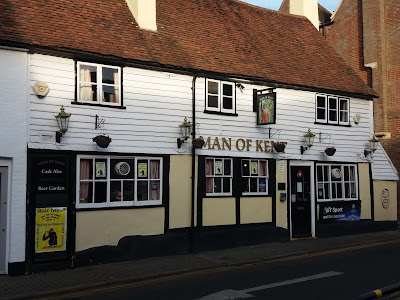 It was during this time that Bass committed an appalling act of vandalism by announcing the closure of their Union Rooms on the grounds of "cost". For a brewery that had built its reputation on the quality of its pale ales, this was tantamount to sacrilege. As CAMRA commented at the time, for a company prepared to spend thousands on advertising such tasteless aberrations as Carling Black Label, to claim that they couldn't afford the maintenance and upkeep of the rooms where their most famous and prestigious product was produced, just did not add up.

Bass claimed that after extensive trials they had managed to match the unique taste of Draught Bass, using modern conical fermenters, with that of the version brewed using the traditional union method. As CAMRA again remarked, "They may indeed have been able to do this under carefully controlled brewery sample room conditions, but would they be able to reproduce the same character in the pub cellar?"

My own observations (and indeed tasting at the time) suggest that CAMRA was correct, and the Draught Bass that I sampled during the mid-1980's quite frankly left me rather disappointed. It also left me feeling extremely angry that Bass could have debased their most famous product in this way.

In March 1987 I had the opportunity of returning to Burton. A group of friends (drinking buddies) had noticed a trip advertised by the local coach company - Maidstone & District. The trip was advertised as  "The Burton Brewer", and consisted of a visit to the Bass Museum followed by a trip around the Bass Brewery. I had seen the museum, then in its infancy, during my earlier visit and the opportunity to re-visit it and to spend some time in Britain’s “brewing capital” seemed too good to miss. We duly booked our places and on the allotted day boarded the coach to Burton.

After a somewhat tedious journey up the motorway, we arrived in Burton just after midday. Our driver told us to assemble at the brewery gates at one o'clock, so having some free time, we decided to try some of the town’s delights. We headed straight for the Victoria Tavern, the brewery tap of the then recently formed Burton Bridge Brewery.

The pub was a splendid multi-roomed establishment and the beer was very good as well. We tried the Bridge Bitter and also the very tasty Porter, but by the time we arrived back at the brewery gates we learned that not only had we missed our trip round the museum, but the tour round the brewery was about to commence. It seems that the coach driver had got his times muddled up, which was a great shame as I would really have liked to have had a proper look round the museum. 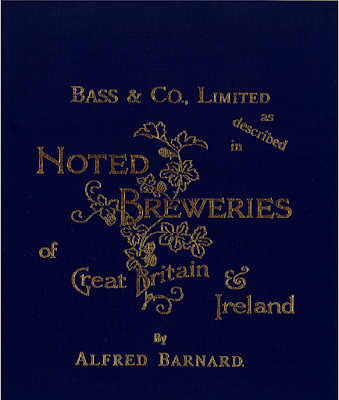 Seeing that we were late, our tour guide enquired as to where we had been, with a look of obvious annoyance on her face. One of my three companions informed her that “We had been sampling some proper beer in the Victoria Tavern". “Oh”, replied our guide, "it's strange but everyone seems to go there". “Perhaps if Bass brewed some decent beer these days, people wouldn't have to” murmured another of my friends. Our guide either did not hear, or perhaps chose to ignore that somewhat pointed but rather poignant comment, and without further ado we embarked on our tour of the brewery.

As we rapidly discovered, this was not to be a trip around the solidly traditional Number 2 Brewery that I had visited nearly ten years earlier. Instead our tour was to consist of a look round the ultra modern Number 1 Brewery. En route to the latter we discovered perhaps the real reason for the closure of the Burton Union rooms, namely the site was wanted for redevelopment. Demolition of the lovely old red-brick Victorian buildings was well under way, a sight which left me feeling both saddened and angry.

There is not much to see in a modern, functional brewery. Everything is either concrete, steel girders or white-tiled walls. Most of the brewing vessels are totally enclosed and can only be glimpsed through viewing portals. However, the view over Burton from the top of the brewery was worth seeing, even if it again provided further evidence of the desecration of the town's proud brewing heritage by both Bass and near neighbours, Ind Coope. 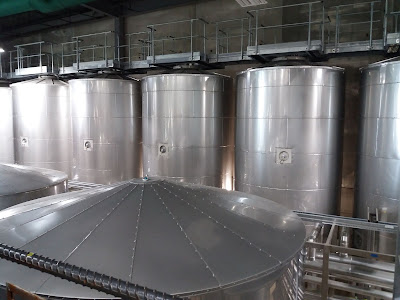 The tour ended with a couple of pints in the visitor centre. My friends and I all opted for Draught Bass, but after five pints of Burton Bridge ales our palates were somewhat jaded and it was not possible to give either a sound or indeed fair judgement on the taste of the beer.

Some six months later I had the opportunity to visit Burton again; this time on business for my new employer. I travelled by train, and as Burton is somewhat poorly served by rail links, I was collected from Nuneaton station, on the West Coast mainline, and driven to Burton by a representative from the company I was visiting. We drove to the company's factory on the outskirts of Burton, and after a very fruitful morning's discussion adjourned for lunch. My host took me to a pub in a nearby village and, seeing as it was a Bass house, I opted for a pint of Draught Bass.

We sat down at a table ready to peruse the menu, but all thoughts of food vanished as I took my first sip of the beer. It was heavenly. I decided that I must be dreaming and took a full mouthful this time to discover that I wasn't imagining things. There was no mistake, this was the Draught Bass I had known and loved, but which I thought had been lost for ever! I was absolutely amazed that after all this time the ale had suddenly returned to its previous superb form. During the course of the meal I made certain that this was not a “one-off” by ordering a second pint. This proved every bit as enjoyable as the first, and definitely made my day. It even eclipsed  the successful outcome to my business trip, which was concluded when we returned to the factory. 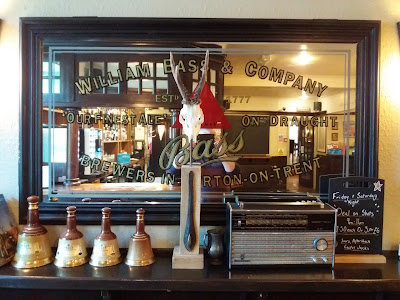 It still seemed too good to be true that Draught Bass was back on form, but a couple of months later I had the opportunity to sample the beer again when I visited the West Country for a well earned holiday. My wife and I, accompanied by our pet dog, drove down to Devon for what was to be our first proper holiday since our honeymoon some two years previously.

We had booked into self-catering accommodation in an annexe adjoining a farmhouse, close to the picturesque village of Dittisham on the River Dart. Although my wife had been to this part of South Devon before, it was my first visit. Furthermore, all we had to go on in those pre-internet days, as to the standard of our accommodation, was a brief description in the brochure, plus an artist’s impression. It was therefore with some trepidation that we drove down the narrow track which led to the farmhouse.

We needn't have worried, as the accommodation was of a very high standard, and was clean as well as cosy and comfortable. Having unloaded our bags, I left Mrs PBT’s to prepare our evening meal and set off, in the car, to explore Dittisham and, more importantly, to find its GBG listed pub - the Red Lion. 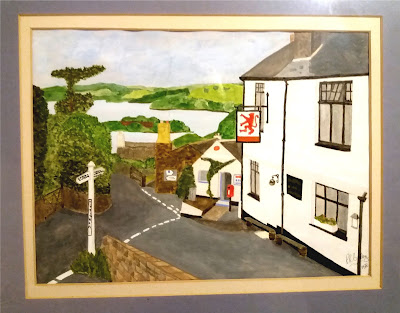 Standing close to the imposing village church, the Red Lion is a large, but perfectly ordinary looking, white painted, Victorian pub.  Stepping inside though I  was immediately struck by its peaceful atmosphere, and quiet rural charm. I had noticed that Draught Bass was on sale, so spurred on by my previous experience opted for a pint.

It was every bit as good as the ale I had recently sampled in Burton. I tried another swift half, just to make sure (I was driving after all!). I then instructed the barman to fill my 4 pint container with Bass and set off back to the farmhouse.

I arrived back in extremely high spirits, enthusing about the beer, the pub, the village, the tranquillity of our surroundings and life in general, and tucked into my meal with relish. I washed it down with several more glasses of Bass, and polished the rest of it off later that same evening. Over the course of the week, I discovered Draught Bass to be quite  common in South Devon, and I must confess I enjoyed a good few pints of it. 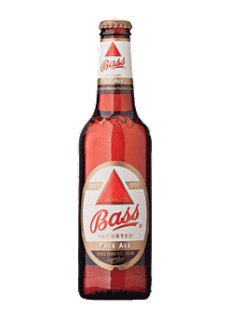 We returned to the same farmhouse for three years in a row, and on each occasion I enjoyed the Bass at the Red Lion as well as the other pubs in the area. One pub in particular is worthy of a mention, namely the Dolphin Inn at Newton Ferrers. This wonderfully unspoilt pub faces out, across the River Yealm, to Noss Mayo - the village on the other side of the estuary. I have some very happy memories of sitting in the south-facing, pub garden looking across the river, whilst soaking up the mid-September sunshine and the superb Bass in equal quantities!

The Bass seemed all the more better for being served straight from the cask - by gravity, and this leads me on nicely to the conclusion of this treatise,  namely the methods by which Draught Bass is served.

I'm lucky that one of the pubs I drink in regularly, the Unicorn in Manchester city centre, has Draught Bass as its permanent cask beer (and was once home to the Honourable Order of Bass Drinkers), but's it's the only I know of round here which does.

Matt, I remember the Unicorn well from my time in Manchester. The pub always kept a good pint back in the day, so I'm pleased to learn it's still stocking Draught Bass.