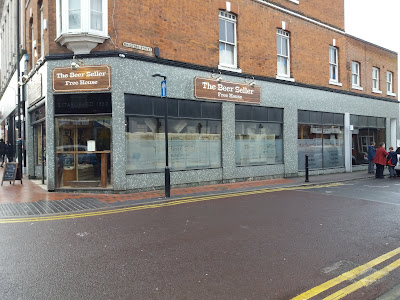 The Beer Seller, the latest and very welcome addition to the Tonbridge beer scene, opened its doors to the public last Friday (14th December). I was unable to be there for the opening, as Friday was also the day of my firm’s Christmas dinner, but I did call in on Sunday and was pleasantly surprised with what I found.
The old jeweller’s premises of John Angell in Tonbridge High Street, have been transformed into a rustic-looking barn, which just happens to house a pub. I freely admit I had no idea what the new proprietors had in mind for the vacant former shop premises, but knowing that they are the owners of the Halfway House in Brenchley, I knew it would be something out of the ordinary. 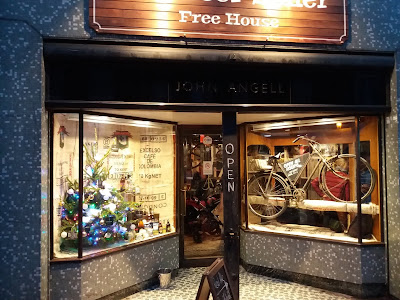 The team responsible for the transformation, spent eight weeks working 12 hour days, seven days a week, to complete the project in time for the pub’s projected opening day, and what they have achieved, has to be seen to be believed. So without giving too much away, a lower false ceiling, constructed out of corrugated iron sheeting, has been fitted, a new stone-flagged floor has been laid, and a new back-bar fitted.

The latter is behind the bar, and is where all the beers and ciders are dispensed from. Like its sister pub, all the cask beers are dispensed by gravity, straight from casks houses in a specially constructed, chilled cellar room, just behind the serving area. 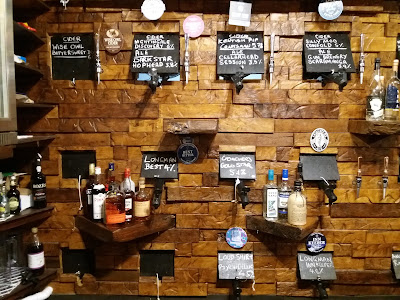 The pub was pleasantly busy when I called in, with a good mix of customers, ranging from shoppers, family groups or people – like me, out in search of a good pint. There were several people standing at the bar, and I recognised one as my old friend and walking companion, Eric. 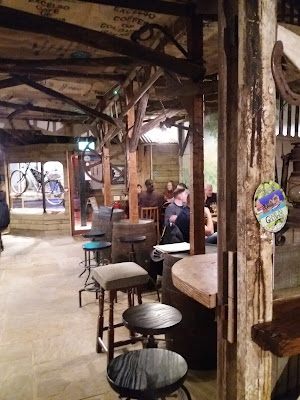 I hadn’t seen Eric in ages, let alone have a beer with him, so after exchanging greetings, I offered him a drink. He opted for the 5.1% Gold Star from Goacher’s, whilst I went for the 4.3% Old Man from Long Man Brewery. I must admit my eyes lit up when I spotted the sign for this excellent Old Ale, and I was not disappointed. It was smooth, dark, full-bodied an eminently drinkable – in fact everything an Old Ale should be.

I spent some time chatting to my old friend, and also to the friendly barmaid, who seemed happy to answer all our questions. I gave her my card, which she passed over to the General Manager, a congenial fellow called Jamie. Jamie said they were all extremely pleased with the response to their opening and with the positive reactions and comment from local people.

He told me that the aim was to keep things local, sourcing cask ales, ciders and  other drinks as much as possible from producers based in Kent or Sussex. Cellar Head, Gadd’s, Goacher’s, Long Man and Tonbridge are supplying the core range of beers, alongside classic  session beer, Adnam’s Southwold. These will be complemented by guest ales; again sourced locally, wherever possible. 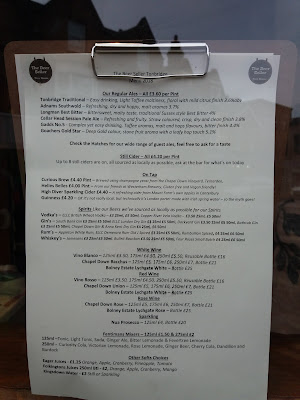 I noticed that the draught lagers were also local brews, with Helles Belles from Westerham Brewery and Curious Brew from Chapel Down. A changing range of local ciders is also stocked. The Beer Seller offers good value for drinkers, with regular cask ales selling at £3.60 a pint, lagers at £4.00 and ciders at £4.20.

After finishing my 4.0 NBSS pint of Old Man, Eric returned the compliment and bought me another pint. This time I went for the 3.9% Scaramanga, a refreshing and well-hopped pale ale from Sussex-based, Gun Brewery. This pint came in at 3.5 NBSS; both scores being a good start for this new establishment.

I left just before 5pm, and hurried along to meet son Matthew, just as he was finishing work. He’d promised me a lift home, so I didn’t want to keep him waiting. Before leaving I said goodbye to Eric,  thanked Jamie and the barmaid, and told them I’d be back. I also promised to give then a decent write-up on the blog. 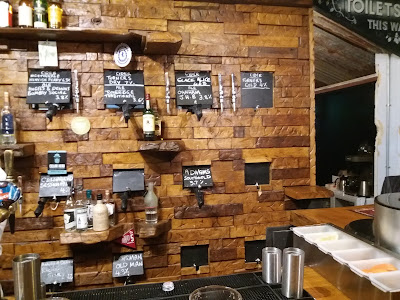 The Beer Seller is definitely a welcome addition to Tonbridge and the local drinking scene, and I strongly recommend you pay it a visit, if you are in the area.

Footnote: John Angell Jeweller & Goldsmith was an old family business, which was established in 1830. It ceased trading mid-way through last year, and as a mark of respect to the building’s long heritage, the old name has been left up above the door.

All happening in Tonbridge - I can't keep up. Funny how quickly beer scenes change; I guess it reflects availability of sites as rents and social change frees up old style pubs and town centre shops.

Hi Martin, yes the beer scene in Tonbridge has changed out of all recognition in the last 2-3 years, and has gone from pretty dire, to on a par with Tunbridge Wells. Local drinkers are definitely spoilt for choice.

It is also encouraging to witness closed retail outlets becoming converted for other purposes, rather than turning into yet another charity shop. (Tonbridge has more than its fair share of the latter!). The town is definitely on the up, despite what is happening nationally!