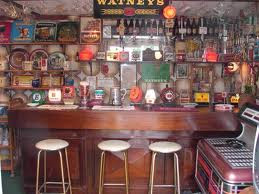 It seems my recent post about the Pubs of my Youth has sparked a bit of debate, especially with regard to the subject of "top pressure". Our friends in the north have commented that this system was virtually unknown in the northern heartlands, and yet it was pretty common down south. Basically it was a system designed to serve cask-conditioned beer using "top pressure" CO2, which was applied, via an adaptor, to the shive hole of the cask and then, when a tap was opened on the dispenser on the bar, used to force the beer out of the cask and into the customer's glass.

The brewers claimed that the system kept beer better, and prevented it from going off. Whilst the latter was undoubtedly true, the former was not, as the gas applied to the beer had a tendency to dissolve and make the beer overly gassy, and at times quite unpalatable. Nevertheless, during the early 1970 this system was adopted by several of the large brewing conglomerate's that had sprung up during the previous decade, and was particularly favoured by both Courage and Whitbread who owned the majority of the pubs in the part of East Kent where I grew up. To say that "top pressure" was actively encouraged by the brewers is an understatement, and it was the "norm" in most of the local pubs. But not everywhere, as I am about to relate.

Back in 1974, during the summer break from university, I popped my head around the door, for the first time, of what for a while became one of my favourite pubs in my home-town of Ashford. This was at a time when I had started to take a firm interest in Real Ale and real pubs. The pub was called the Trumpeter and, as it was a Whitbread house, I ordered a pint of Trophy. To my surprise the landlady went to a bank of antique looking hand pumps and pulled me a pint. Although my village local sold "Real" Trophy, this beer in an un-pressurised form was like gold dust, especially in Ashford itself. However, here I was in a pub which I had never been in before, drinking a pint of Whitbread Trophy that wasn't full of bubbles.

I told a friend, and fellow CAMRA member, the good news, and he hot-footed it down to the Trumpeter to see for himself. However, on my next visit to the pub I ended up being served a fizzy pint from a gas tap, fitted to the outlet of one of the other pumps. Thinking that the brewery conversion team had been in, and fearing the worst, I enquired about the means of dispense, only to be told that the real thing was still available, but was reserved for regulars only, plus "those in the know"!

The reason for this clandestine approach was that, so far as the brewery were concerned, the Trumpeter sold only pressurised Trophy. However, the locals were not at all keen on having their beer gassed up, so unbeknown to Whitbread, one hand pump had been left in working order and was still connected. I was sworn to secrecy over this matter, as was my friend when he joined me for a drink later that evening. The last thing the landlady and her regulars wanted was for the brewery to get wind of the fact that one of their pubs was serving cask beer by “non-approved” methods.

As well as serving traditional beer, the Trumpeter was an unspoilt traditional town pub. Over the course of the summer, until my return to university, I became quite a regular there and eventually ended up on first name terms with the landlady. Her name was Ethel, and in common with other legendary female licensees, ran the pub single-handed in the time honoured tradition, standing no nonsense and governing proceedings with a rod of iron. Despite this, she always had a friendly smile and a greeting for customers - with the exception of representatives from the brewery that is!

I have related the above story, in depth, to illustrate the point that "top pressure" wasn't universally welcomed by drinkers, and was even unpopular with certain licensees. It was the real "bug-bear" of CAMRA back in the early days, especially as it ruined otherwise perfectly acceptable beer.

I have scoured Google Images for pictures of the Trumpeter (demolished as part of a road-widening scheme during the 1980's), but so far without success.
Posted by Paul Bailey at 21:33

Hi Paul im really happy ive found your post of the trumpeter as the landlady ethel was my auntie, it would be great if any pictures could be found. Great little write up as it describes her to a T. The pub thou is still there but has been converted to dominos after being empty for a number of years.