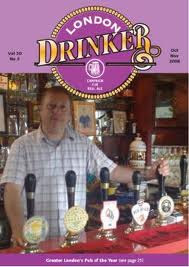 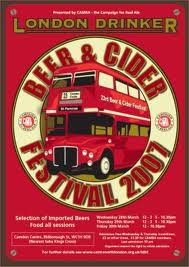 Whilst doing a bit of research for my recent trip round a few choice London pubs, I neglected a rather important source of information. The source was none other that that excellent bi-monthly publication, London Drinker.

I was reminded of this at the weekend, when a friend lent me a copy he'd picked up recently. As well as a good read, the magazine is packed with adverts from good real ale pubs, many of which sound worthy of a visit. For instance The Cask, close to Victoria Station, sounds well worth calling into as do the King William IV (Brodie's Brewery), the Pembury Tavern, the Red Lion (Isleworth) and the Old Coffee House.

The current edition also has a feature on German Beer Pubs in London. I wish I'd read this article prior to last week, as I learned that an establishment called Katzenjammers is situated just round the corner from Borough Market. I was in this vicinity last Thursday, drinking in both the Rake and the Market Porter. Had I known, I could have called into Katzenjammers and sampled some German beers as well!

The silly thing is I've got plenty of back issues of London Drinker at home; why didn't I think of consulting them?

ps. A certain well-known, and somewhat controversial free-house also has a large ad in the current edition. No prizes for guessing which pub it is!
Posted by Paul Bailey at 20:44

Hah, I do the same. Despite loving online media for spreading the word, I love my copies of Leeds (New Full Measure) and Bradford's (Tyke Taverner) CAMRA mags. A lot of work goes into producing them, too.

Stumbled across the Old Fountain just north of Old St tube earlier in the year. Loads of well kept ales in there. Not that far from the Holy Grail (Gunmakers) there either.

Thank's for the tip, Eddie.