An Evening in the Sticks 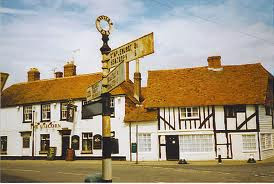 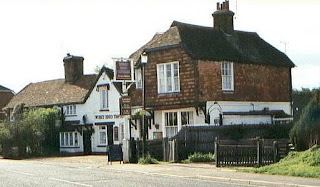 It was a low turnout at Wednesday's CAMRA social, with just four of us making the trip out to Marden, (correction three of us; the other member lives in the village!). It was shame really, as those of us who did make it there found both pubs in the village to be thriving.

For those not in the know, Marden is a typical Kentish village, situated in the flat, low-lying part of the Weald in between the Greensand Ridge to the north and the High Weald to the south. For me it is easily reached by train, being just two stops down the line from Tonbridge. However, although I have passed through Marden station dozens of times during the course of a life lived in this part of Kent, it is probably only the third time I have ever visited the village itself. Like several other villages on the Kent Coast main-line, Marden is a popular place for commuters to live. However, on alighting from the train and walking the short distance into the village, I was pleasantly surprised to see evidence of a thriving local community, with several shops, a fish and chip shop, plus an Indian restaurant. The latter though is a former pub which I believe was called the Chequers. There also used to be a further pub in the village called the Rose & Crown, which closed as long ago as the early 1980's.

There are still two pubs in the centre of Marden though, and we called in at both on our visit the other night. First stop was the Unicorn, a handsome white-painted building that still shows evidence of its two former bars. Harvey's Best plus Sheps Master Brew were on offer as the regular beers, with Wychwood Hobgoblin as guest ale. I opted for the Harvey's; those who read this blog regularly will know I am no fan of Shep's, and I have to say I am not keen on Hobgoblin either. To me the beer contains too much roast malt to be a bitter, and nowhere near enough to be a stout! Enough said; it may be a bit of a cult beer for some, but it just leaves me cold. There was a lively crowd sat at the bar, plus a few diners enjoying what looked like some well-presented food. For a foggy and slightly damp Wednesday evening it was good to see the place looking busy.

I only stopped for one in the Unicorn, as I wanted to meet up with my friends whom I knew were eating first in Marden's other pub, the West End Tavern. I re-traced my steps past the small, but attractive church and back past the station, and entered the aforementioned West End Tavern. It's a good job I'm relatively short as I would have had trouble scraping my head on the low-beamed ceiling! If I thought the Unicorn was doing ok, then the West End Tavern was doing doubly so. Two of my friends had taken advantage of the two meals for £10 deal that the pub was offering and, judging by the number of people eating, plenty of other diners had done so as well! Beer-wise there was Harvey's Best, Shep's Spitfire and Westerham Finchcocks on sale. I stuck with the Harvey's which was in fine form.

I didn't stay all that long as I wanted to make sure I caught the second to last train home. I was the only soul standing on the cold and lonely station platform, and I was relieved when I could see the lights of the approaching train. I sometimes think it is good to visit places one wouldn't normally think of going to, especially when they are as easy to get to as Marden is from here. It was also good to visit a couple of new pubs, although I have a sneaky suspicion I have been in the West End Tavern many moons ago.

What was even better was to see two pubs thriving on an otherwise dull and dismal autumn night. Although situated in an obviously affluent area, it would still seem that these two hostelries are doing something right and bucking the trend. To me both seemed like pubs used to be, and by that I mean "pubby pubs". Both had a cosy and comfortable feel to them. There was no unnecessary intrusions like Sky Sports shoved in you face, and whilst there was music playing in the Unicorn, it was low volume and in the background. If I lived in the village I would feel quite at home drinking in either and that, to me, is the ultimate test of a good pub!
Posted by Paul Bailey at 21:13

With you on the Hobgoblin Paul. I think you know my views on Shep's already.