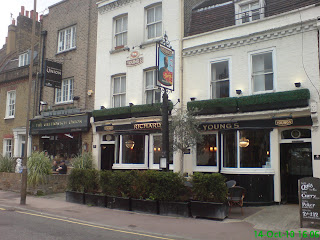 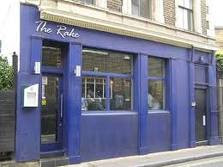 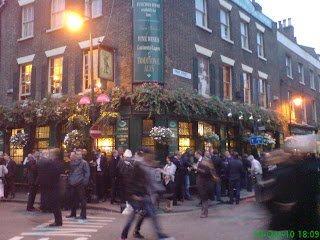 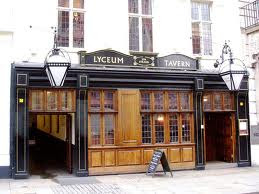 Last Thursday, I had my eagerly anticipated trip around a few London pubs. On the whole it lived up to my expectations, and even threw up the odd surprise. The beer quality was on the whole, good, and prices reasonable, but it was the pubs themselves that were the chief reason for this mini-pub crawl, and I'm pleased to report that none of them disappointed.

Seeing as I was starting out in Docklands (a Dental Show at the Excel Exhibition Hall), I followed Tyson's suggestion and started my crawl in Greenwich. Travelling via the DLR I alighted at Greenwich station and walked the short distance up Royal Hill to the Greenwich Union, my first port of call. The Union is owned by Meantime Brewery, an innovative and forward-thinking brewery founded and run by master brewer Alistair Hook. I have long been an admirer of Meantime's beers, and whilst it might not be CAMRA's favourite brewery (producing just a single cask-conditioned beer), it gets my vote for the sheer quality of both its continental-style beers, plus its authentic recreations of old, traditional English beer styles.

The first surprise, (not a surprise to anyone who knows the area), was that the Greenwich Union is next door to the Richard I, a Young's pub that I have rather fond memories of. The Richard I is also known as Tolly's, as many years ago it was owned by former Ipswich brewers, Tolly Cobbold. I didn't venture inside Tolly's; the sight through the window of two hand pumps dispensing Courage beers was enough to put me off (I know Well & Young acquired the brewing rights, but why they would want to promote the stuff in their own pubs is beyond me!).

I digress; Meantime beers were what I was after, that plus the chance to unwind after traipsing up and down the aisles at a very busy trade show. The Greenwich Union delivered on both counts, with some excellent beer, plus pleasant contemporary surroundings in which to sit and relax. I say the beer was excellent; most of them were, apart from the London Pale Ale, which was first one I tried. The pub had both keg and cask versions on tap. Being a CAMRA member, I opted for the latter and have to say it wasn't quite at its best. Possibly the Union doesn't sell a lot of cask, although having said that there was also Dark Star Hophead plus Ringwood Old Thumper on tap, or perhaps I was just unlucky, but afterwards I moved on to try a couple of Meantime's brewery-conditioned beers. Starting with the 4.4% Helles, a fine crisp and refreshing German-style lager, I moved on to Meantime's Oktoberfest Bier. According to the notice board, this beer is brewed in March, to a traditional recipe, and is then lagered until the autumn. The lengthy lagering period certainly made for a fine, smooth and at 5.6% abv, a well-balanced traditional Munich-style festbier.

I was tempted to linger, and sample a few more beers. The pub was comfortable, with some quality newspapers left out for customers to read. I liked the general ambiance of the place, with is light wood bar fittings and its long narrow stone-flagged bar leading out, via some french-windows, to a small garden at the rear, but there were other pubs to visit and it was time to move on.

From Greenwich station I caught an over-ground train to London Bridge. Alighting from the train and making my way through a Borough Market which was starting to run down for the evening, I found myself approaching the Rake. Now it's confession time; until this moment I'd never set foot inside this revered establishment. I'd walked past on a number of occasions, but it always seemed full to bursting. This time I could see un-occupied floor-space, so I nipped inside just behind a party of visiting Americans. Their slight indecision gave me time to peruse the bar, and the well-stocked chill cabinets behind. Deciding to stick with cask, I went for RCH Steam Fair Bitter, 4.5% abv, and very competitively priced, I thought, at £3.10 a pint. I've long been a fan of RCH beers and this seasonal special didn't disappoint, which is more than can be said of the second beer I tried; S.O.S from Pontypridd Brewery, a pale 4.8% beer that certainly seemed to be lacking something.

I sat out on the covered timber-decked area at the side of the pub, indulging in a spot of people watching, before walking the short distance to the Market Porter; a pub I often pop into when in this part of London. The place was absolutely heaving, and I had trouble in getting to the bar. It was worth it when I did as there were some cracking beers on sale. The Market Porter could be construed as something of a ticker's pub; certainly on the evening of my visit there were twelve ales on tap, but the large number of customers ensures that there is always a rapid turnover of the beers. One thing's for sure, I've never had a duff pint in the Market Porter.

To start, I opted for a pint of Saltaire Cascade Pale Ale which, as its name suggests, is an American-style pale at, brewed to a strength of 4.8% abv. I have enjoyed this beer before, and it tasted every bit as good as previously. After the Saltaire I spotted a Dark Star beer on sale. It was their Oktoberfest offering, but it was unlike any Oktoberfest beer I have ever sampled. It was brewed in the typical Dark Star style, ie. extremely well-hopped.

As I said earlier the Market Porter was busting at the seams. The pub seemed to have been extended since my last visit and tempted though I was to stay and sample more of its wares, I thought it was high time I grabbed something to eat. I re-traced my steps back to London Bridge and boarded a train to Charing Cross. I knew there were a couple of Sam Smith's pubs in the vicinity, and as well as selling cheap beer, they also offer value for money meals. I called in initially at the Chandos, just off Trafalgar Square, but it was almost as busy as the Market Porter. Instead I walked along the Strand a while, looking for the Lyceum Tavern. I was beginning to think it had closed until I eventually chanced upon it, and noticing a sign outside stating that food was served up until 8 o'clock, quickly climbed the stairs to the first floor bar. I managed to grab the one vacant table and ordered a meal at the bar alongside a pint of Old Brewery Bitter.

Served of course with a traditional tight Yorkshire head, Sam's always seems to have a slight sharpness lurking in the background. This is probably a characteristic of the house yeast, and at just £1.99 a pint I really couldn't complain. My meal was equally good value, coming in at just over £5.00 for chicken and mushroom pie, chips, veg and gravy. It was no gourmet meal, but was filling and tasty enough, and certainly acted as blotting paper to soak up some of the surplus alcohol.

I left the Lyceum Tavern feeling full and well satisfied. On my way back to Charing Cross I walked past the Coal Hole, another London pub I used to frequent. The board outside advertised several interesting ales including Ghost Ship, the new beer from Adnams, plus at least one offering from Thornbridge. I resisted the temptation to call in, as by this time I knew I'd had enough after what had been an interesting and most enjoyable visit to the capital.
Posted by Paul Bailey at 18:57

Does anyone know anyone who has actually had a good pint of Meantime IPA? I've had it both cask and keg and it just seems bland.