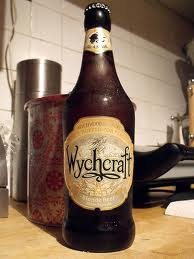 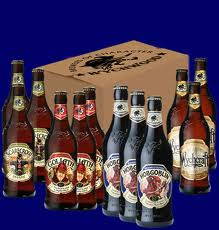 I popped into Lidl's over the weekend, primarily to stock up on a few bits and pieces. In case it hadn't escaped any one's notice, it's Halloween in a couple of weeks time. I know it's an unwelcome import from across the Atlantic, but unfortunately it looks set to stay, and every year there seems to be more and more ghoulish tat in the shops. Anyway, getting in the spirit of Halloween Lidl's were offering a couple of Wychwood beers, with a loose 31st October theme, at the bargain basement price of just £1.00 a bottle!

The prime contender for Halloween was the appropriately named Wychcraft, a blonde 4.5% abv beer said to be brewed from three different malts and three different hops, (the label doesn't state which varieties though!). Less obviously connected with Halloween was Wychwood's Goliath, a much darker 4.2% beer.

Both beers were pleasant enough, and of the two I much preferred the Wychcraft. Obviously Marstons are promoting, and heavily discounting both these beers. I don't want to get into the territory of minimum pricing, or other health-lobby sponsored nonsense, but what I will say is just because these beers are dirt cheap, and I bought a fair few of them, I haven't been sitting here getting sloshed or used them to "pre-load" before going out on the town! Alcohol Concern, and other similar busy-body do-gooders, please take note.
Posted by Paul Bailey at 21:39

The excessive commercialisation of Halloween may be an American import, but it has traditionally been celebrated in this country too - I remember bobbing for apples when I was a kid.