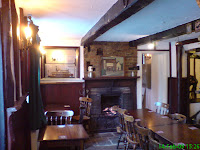 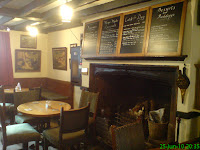 After my recent article on Parlour Pubs, I was prompted to do a bit more digging into the subject, as I find the whole  idea fascinating. We all know that when ones steps over the threshold of a pub, especially a traditional, tenanted pub, one is often steeping into the landlord or landlady's home. The Parlour Pub takes this concept of the licensee's home a stage further in so much as there isn't a physical barrier, in the form of a bar (note that word bar - meaning a physical object, such as a counter or serving hatch), between the licensee and his/ her customers. In a Parlour Pub, one is often sitting in part of the licensees "living space", even though they will normally have additional rooms that are totally private, and to which the general public, in the form of customers, are not permitted.

Of course, serving customers in one's own front room, without the presence of a bar, can present difficulties, even if these are confined to somewhere to put the drinks down. In these less trusting times, the question of security also arises; where does one keep the money that customers hand over in exchange for their drinks? Where does one keep the float (change)? and with bottles of spirits and other drinks on display and openly within reach, what is to stop people helping themselves, as soon as ones back is turned?

I have answered these questions myself really. Things were much simpler, back in the days when this type of pub was common-place. Society was more ordered, crime was much less rife and, most importantly, people travelled a lot less than they do today, Licensees would have known most of their customers who, in turn, would all probably have known each other. With a common bond between them, the chances of petty pilfering and helping oneself, were far less likely to occur than they might today. Apart from issues of security, probably the main reason Parlour Pubs virtually died out is that they were impracticable and inefficient. After all it is far easier to serve a large group of people if they queue up at a bar, where the licensee is standing behind with everything needed (drinks, dispense equipment, glasses, till etc), at his or her disposal. Also, even so far as a half century or so ago, people were demanding something a little more sophisticated than a few chairs grouped around a table. They might have wanted more comfortable seating, or somewhere with alcoves and seating arranged so they can chat, privately if necessary, rather than being almost forced to join in with others, some of whom they may have not cared much for.


Bearing this in mind it is perhaps surprising that Parlour Pubs lasted as long into the 20th Century as they did. Apart from the Woodman's Arms, that I mentioned in my original article, I knew of several others. I  had intended to write about them here, but this post has now grown from being an introduction leading in to a description of  these survivors from a bygone age, into a full-blown article in its own right. I will therefore sign off and post a separate article about parlour-type pubs that I have personal experience of.
Posted by Paul Bailey at 21:14

Tease... I look forward to finding out about some classic pubs in your area, even though inevitably, I'll no doubt have missed my chance to visit.