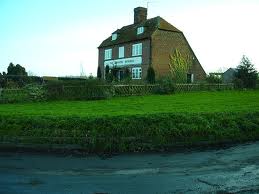 Second in the series of Classic, Basic and Unspoilt pubs is the Mounted Rifleman at Luddenham, near Faversham. If anything this classic country pub was even more unspoilt and basic than the Black Bull at Newchurch,  and certainly much more a "parlour pub" than the latter ever was. Unfortunately, I only had the pleasure of visiting it on a couple of occasions, both during the early 1980's.

The thing that made Mounted Rifleman so special was the fact that it didn't even have a bar! Instead each pint was brought up from the cellar, on a tray, by the landlord. The pub's single draught beer was Fremlins Bitter, drawn straight from the cask, and very nice it tasted too. Even more unusual was that the bottled beers, spirits, mixers and soft drinks were all kept in the cellar as well, almost as though the proprietor didn't want customers to actually see the drinks on offer!

Having only been to the pub twice, and those occasions are both 30 years ago, I am unable to recollect much about it. I remember entering the pub from the rear, almost as though one was walking through the landlord's garden, but I am hard pushed to write anything about the pub's interior, apart from the fact it was basic and simply furnished. I do recall learning in the mid 1980's that the landlord had dropped dead following a heart attack and registering my surprise at this bearing in mind the number of times he must have walked up and down the cellar steps of an evening. Possibly it was too much repetitive exercise that was responsible but, whatever the reason I do know that his brother took over the running of the pub for a while.

Whilst doing some research for this post I found a couple of pictures, plus a short write-up in a book titled "The Village Pub". Written by veteran beer writer, Roger Protz and illustrated with some very good photographs by Homer Sykes, the book was published in 1992, which was getting on for ten years after my visits. Unfortunately there are no shots of the public rooms, but there is a splendid one of landlord, Bob Jarrett starting his journey back up the cellar steps with a tray full of beer. (The forenamed must have been the brother of the landlord that I knew.)

I'm not certain exactly when the Mounted Rifleman closed, but like the previous pub in this series, the Black Bull at Newchurch, the closure took place some time between the publication of the 1993 and the 1999 CAMRA Guides to Kent Pubs. During this time the pub was put up for sale, and was eventually sold without a license, as a private house. This was the sad loss of yet another "national treasure", as well as a great blow to the pub's own loyal band of devotees. The Mounted Rifleman had absolutely no frills about it and and been in the same family for several generations. It was particularly sad to see it close.

The photo of the landlord ascending the cellar steps, referred to above is copyrighted by its creator, Homer Sykes. If you want to see what the pub was like back then, carry out a search on Google Images and you will find Mr Sykes website, displaying the photograph.

There is film of this pub - and of the landlord ascending the cellar steps with a pint of Fremlins - a few minutes into the Jonathan Meades documentary 'how the other half live' (currently on YouTube).