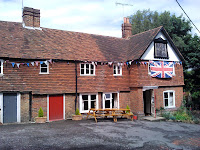 On Saturday I had the pleasure of visiting, for the second time this month and the third time this year, one of only three National Inventory Pubs in Kent, and one that is just a short bus ride away from my home in Tonbridge. 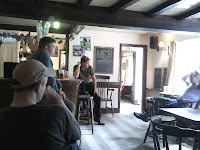 The pub I am referring to is the Old House, at Ightham Common, a small settlement just off the A227, and close to the much larger village of Ightham. If ever a pub deserved the accord  "Classic, Basic and Unspoilt" then the Old House does, and what also makes the pub unusual is that it is effectively a "hobby pub", run by one of the two owning brothers, as a sideline to the family accountancy practice.


I included a write-up on the Old House in a post written back in August, so I won't bother repeating what I wrote here. Also the following link to CAMRA's National Pub Inventory website contains a much more detailed description of the pub, together with Michael Slaughter's excellent photo's of the interior, which are far better than anything my camera-phone could produce.

Anyway, on  Saturday myself plus four fellow  CAMRA members boarded the 222 Tonbridge to Borough Green service, which took us on a scenic detour through the Kent countryside, (admittedly not looking its best at this time of year). Alighting at the top of the hill leading down into Ightham Common, it was a short walk down to the pub, which can be found in Redwell Lane. The Old House is an un-pretentious looking building, dating in part from the 17th Century. Although there is no sign outside, it has the look of a pub, and stepping inside is like stepping back to what pubs were like in the early half of the last century.

We settled for the larger, and more basic, main bar on the left. Normally, at this time of year, the bar is heated by an open log fire, burning brightly in the massive ingle-nook fireplace, but being a relatively mild day, landlord Nick Boulter had not lit the fire when we arrived, although he did do so later. As usual there was an  interesting range of beer on, including Dark Star Hophead, alongside Tripple fff Comfortably Numb and, a must try beer at this time of year, Inncognito a Port Stout from plain Ales of Salisbury Plain. All the beers are gravity dispensed from casks kept in a temperature-controlled room, just behind the bar.

For a while, apart from a couple of elderly gentlemen in the smaller, and more comfortably furnished right hand bar, we were the only drinkers in the pub, but it didn't take too long before other customers started arriving. Our time in the Old House was slightly limited as, owing to the vagaries of the bus timetable, there was a bus back to Tonbridge departing just after 2pm, but then there wasn't another until 5pm. Whilst all of us would  have been quite content to remain where we were, Nick shuts up shop around 3pm. I should explain he doesn't live there, even though as I understand things this was his childhood home. The Old House is therefore a "lock-up" pub as well as a hobby one!

We still had nearly two and a half hours though to enjoy the pub and its excellent beers I started with a pint of Golden Braid, an excellent 3.7% golden ale from the often overlooked and,  at times underrated Hopdaemon Brewery. In business at Newnham, near Faversham since 2000, Hopdaemon produce a fine range of beers, most of which have a mythical theme to their names. Brewer and owner, Tony Prins, a New Zealander by birth, sometimes used to deliver his beers in person back in the days when I had my off-licence, and I have always found them to be eminently drinkable. They are available in both cask and bottled form, and the latter can often be found in local branches of Sainsburys and Waitrose. The brewery sometimes appears eclipsed by some of the newer arrivals on the scene, but Tony deserves credit for his use of  fine aroma hops in his beers and for his passioante approach to his craft.

I moved on to the Hophead for my second pint, but whilst I am a huge fan of Dark Star beers I have to say that, on this occasion, the Golden Braid definitely had the edge. Some of my companions tried the Comfortably Numb, whilst others gave the Young's Special a go. Unless there is nothing else available, the latter is a beer I tend to avoid, especially when I remember how richly, fruity and hoppy this beer used to be back in its Wandsworth heyday. When I compare it to the bland, thin apology for a beer that it has become today, then I feel sad at the demise of a former iconic beer, sacrificed on  the altar of corporate greed.

My final pint was the aforementioned Port Stout, from Plain Ales. Now I don't know too much about this brewery, although I have since discovered they turn out some excellent beers. This was the second plain ales beer I have tried recently; the other being Innocence, a 4.0% golden bitter, which I sampled on my previous visit a fortnight ago. Despite a relatively low strength of 4.8%, Inncognito proved rather a heavy beer to drink and rather than rushing it, I found myself slipping behind my companions. We were not in a race though so this didn't matter, but it was my last pint of the session.

We now had a couple of different options. The first was to walk along the lanes to Ivy Hatch, the next village, where we had learnt the somewhat food-oriented Plough is now under new ownership and keen to re-invent itself as a community local. The Plough's website was also showing the pub as stocking beers from Birling-based Kent Brewery - a company who's beers we don't often see in our area. The downside to this was a walk back in the dark to the busy main road, where bus stops are few and far between.

The other option was to catch the 14.09 bus back to Tonbridge, and then call in and sample some of the Christmas ales on sale at the Humphrey Bean; our local Wetherspoons. We were pretty evenly split on what to do, and had almost decided to split into two factions, when a look outside at the rapidly deteriorating weather made our minds up for us, and we opted for the early bus and the Christmas ales. This was a shame really, as we missed an opportunity to check out a pub we seldom, if ever, visit. On the plus side though we decided that come the spring we would arrange a return visit to the Old House, but would then go on to the aforementioned Plough followed by a visit to the Padwell Arms, at nearby Stone Street. A decade or more ago, the Padwell was West Kent CAMRA branch pub of the year, but during the intervening years has seen a succession of different owners. Again it would have been good to check how its current, relatively new licensees are getting on, but walking along unlit country roads in the dark and the rain is not a good idea, so like the Plough, the Padwell will have to wait until the New Year, and the better weather.

We said our farewells to Nick, walked the short distance back up the hill and caught the bus home. On the way we passed yet another unspoilt country inn, the Kentish Rifleman at Dunk's Green, and made a mental note to pencil in a visit there as well, along with the legendary Golding Hop in nearby Plaxtol.

The Humphrey Bean wasn't too busy when we arrived, which meant we didn't have to wait to get served. I went for the Albury Ruby,  a 4.6% warming dark winter beer, from Surrey Hills Brewery, and then followed this with a pint of Yuletide, a 4.5% dark-ruby coloured winter ale from Adnams. Although this was not an official branch social, let alone a formal branch meeting, we agreed to set up a mobile meeting/calendar group for those of us with smartphones, and to look at ways to enhance better and speedier communication of news and developments on the local pub scene. All this would be linked to our branch website and Facebook page, and would also incorporate links to Twitter for those who use this form of social media. The thinking behind all these ideas was to enable faster dissemination of information and also to enable us to meet up quickly when we receive wind of special events, unusual beers on sale etc.

It's amazing how a few beers can stimulate the thought processes, so all in all it was an enjoyable and  productive day out.
Posted by Paul Bailey at 21:49

Ah yes, I've actually been to that one. It's always special to visit such a classic pub.

Hello. And Bye. Thank you very much.