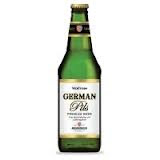 Top end supermarket, Waitrose just seems to get better and better, with the launch of two new "own label" beers. Waitrose German Pils, is a 5.0% premium beer, produced at the Memminger Brewery, in the town of Memmingen in southern Bavaria. According to the blurb on the back of the bottle, "the beer is made using mountain water sourced from the Vilsalpsee and the Lechtaler Alps from the brewery's own well." It's a crisp, clean-tasting  lager that's right up my street, and at just £1.41 for a 500ml  bottle a real bargain as well.

Also available is Waitrose Czech Pilsner. another 5.0% beer, this time produced at the Herold Brewery at Breznice Castle in Bohemia. Brewed from locally grown  barley malted within the castle walls, and bittered with Saaz hops. The beer itself is deep golden in colour, much darker than the German version above, pleasantly hoppy and full flavoured. Again the beer is priced at just £1.41.

I'm not certain whether these are introductory prices or not, but at the moment they are too good to be missed. It remains to be seen whether Waitrose will be adding other classic beer styles to this line up; they have been selling an "own label" Bavarian Wheat Beer for a number of years now, but it would be nice to see some Belgian beers putting in an appearance, plus of course, how about some good old-fashioned British ales?

I'm not certain whether these are introductory prices
25% off introductory offer, I think, till the New Year. Thanks for the recommendation. Just wish my local branch stocked Proper job instead of Tribute (both on 3 for £5 currently).

paul, my local Waitrose doesn't stock the full range of beers either, but they do stock Proper Job!

Quite a sloppy typo on the bottle label – the town is Memmingen, not Memmingham.

Barm, the label states "Brewed in Germany and bottled in the UK". I didn't think our Teutonic friends would spell the name of their own town incorrectly!

Why do the units vary on these differ?. both same strength.Czech 2 units, German 2.5 units.???