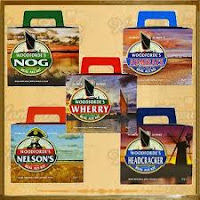 Back in early 2011 I began reviewing a case of six different beers kindly sent to me by renowned Norfolk brewers, Woodfordes. I sampled and reviewed four of them, but owing to being off the drink for most of that year, the remaining two bottles ended up tucked away at the back of the cupboard. I tried the Nelson's Revenge a couple of  months ago, but have only just got round to sampling the final, and strongest of the beers, the 7.0% Head Cracker. Here's what I thought of the beers:

Nelson's Revenge 4.5% Best Before End June 2011. Poured surprisingly clear and not excessively lively either. After this lengthy maturation period the yeast seems to have formed a firm layer at the bottom of the bottle. No off-flavours, although there is a very slight hint of acidity in the background. This may be a characteristic of the house yeast. Despite the beer being almost a year beyond its Best Before Date, it is quite crisp tasting (citrus hops according to the tasting notes) and refreshing, with some juicy malt still evident. The long maturation period seems to have done this beer some good. Not a  beer I would buy again, in bottle form, but still eminently drinkable.

Head Cracker 7.0% Best Before End Aug 2011. Amber in colour and  poured like above, with virtually no head. Again the yeast had formed a firm layer on the bottom of the bottle. Quite fruity, which isn't surprising given the strength of the beer, and again with that hint of acidity lurking in the background. I'm convinced now that it's definitely a characteristic of the house yeast. Plenty of juicy malt but for me, not enough hops. If I'm going to drink a pale ale of this strength then I like plenty of hop bitterness to counter the sweetness of the malt.

The saving grace for this bottle is the extended maturation period, which  has seen the yeast nibbling away at some of the residual malt sugars. This has reduced some of the slightly cloying sweetness, and replaced it with the aforementioned fruitiness. Again, not a beer I would buy in either bottle or cask for, but I am pleased to have tried it nonetheless.

Final Verdict I am on record as not being a huge fan of bottle-conditioning, for various reasons but  not least because of the variability of the process. I would say that in the case of the above beers, the lengthy maturation period, extended by almost 18 months in both instances, certainly added something to the beers. Whether it improved them is open to debate, as I don't know quite how they would have tasted if I had consumed them within their respective Best Before Dates. What I do know is the yeast had packed down really tight at the bottom of the bottles, leading to their being easy to pour and ending up crystal clear in the glass.

If there are any other breweries out there that would like to send me a few bottles for review, I promise not to take so long over the process next time!
Posted by Paul Bailey at 22:02