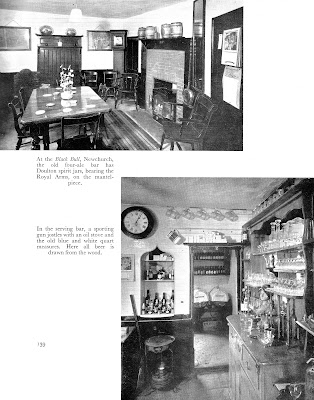 As promised earlier, here is the first of a series of follow-ups about Classic, Basic and Unspoilt pubs. I was tempted to write this particular piece following a comment by David of Little Omenden Farm and Nursery, on my article about Parlour Pubs. It seems we both knew a wonderfully unspoilt pub down on Romney Marsh; a pub called the Black Bull, in the tiny, picturesque village of Newchurch. Sadly the pub is now closed.

Romney Marsh is a triangular-shaped area of land that just out into the English Channel. It straddles the counties of Kent and East Sussex, but the majority of it lies within Kent. In Roman times this whole area was under the waves, but over the centuries it has gradually been reclaimed from the sea, by a combination of human effort, the natural silting up of rivers, plus the odd major storm. Today it consists of a flat land of wide open spaces, drained by a system of ditches and dykes, where both arable and sheep farming are carried out. It contains a mix of isolated farms, plus a handful of attractive villages, complete with ancient churches and, of course, the odd historic inn. It is an area where smuggling was once rife; the numerous watercourses and narrow winding lanes providing an ideal cover for illicit activities. Even today, despite the opening of a new road right across it, the Marsh is still an isolated, and at times, desolate place, and although I don’t get to visit it as often as I would like, it remains as one of my favourite parts of the South-East.

Newchurch is a typical Romney Marsh village; and its local hostelry, the Black Bull, was the pub of ones dreams. Sited on a bend on the edge of the village, the Black Bull was best visited on a cold winter's night. With a biting easterly wind blowing across the flat and bleak marshland, the pub offered warmth and shelter from the elements. It was also a smashing unspoilt country pub in its own right, dating back to the reign of Queen Anne.

I first became acquainted with the Black Bull in my late teens, when I visited it with a school friend. During the summers of 1972 and 1973, we had made a point of exploring the pubs of Romney Marsh on our motorbikes. During those care-free times we would call in at a pub to enjoy a game of darts together with a glass or two of bitter, and the Black Bull became one of our regular stops.

Back then the pub was owned by Whitbread, but during the 1970's it was sold to Shepherd Neame. By then I was in my mid twenties, and had returned to live in Kent after four years away at university in Salford. Although it was a bit of a drive to the Black Bull, I would make a point of taking friends there to in order to introduce them to what I considered as one of the finest examples left of a traditional country inn.

The Black Bull had two rooms, leading off from a central corridor. To the left, was a plainly decorated room with a bare stone floor and simple furnishings. Further down the corridor, and leading off to the right, was the larger of the two rooms. It was here that the bar was situated, and behind the counter, on a back shelf, were kept several firkins of beer, each resplendent with its own brightly-coloured cask jacket. The room was carpeted, and furnished in the style of an old fashioned sitting room, with armchairs, settees and braided lamp shades. It was a wonderfully relaxed place in which to spend an evening, and reminded me of a similarly furnished pub (alas long since closed) called the George, in the village of Wye, close to my childhood home.

Sometime in the late 1980's the Black Bull was "disposed of" by Shepherd Neame and I began to hear dark rumours that it had been knocked about. I never had the chance to discover this for myself, as my last visit  there took place in 1985, when it was still owned by Sheps. I had just re-married, and my wife and I were spending our honeymoon in the picturesque town of Rye. During our stay we decided to call in at the Black Bull for lunch. Unfortunately, my new wife did not view the pub in its best light and was not impressed. It was evident during our visit that the saloon bar, in particular, was in need of a jolly good clean, and the pub in general certainly gave the impression of being very tired and run down.

I am not exactly certain when "last orders" were called at the Black Bull for the last time. The pub is listed in CAMRA’s Real Ale Drinker’s Guide to Kent Pubs, published in 1993, but by the time the 10th, and last countywide Kent guide was published in 1999, it had closed and become a private residence. A clue as to why it closed can be gleaned from the description in the 1993 guide: “Tucked away, this one-bar pub is pleasantly quiet”. Too quiet in fact! Shep’s were obviously unable to make a go of the pub. For a start there was no car park, with patrons having to leave their vehicles on the grass verge of a rather narrow and winding road. Newchurch itself is tiny with few chimney pots and almost certainly unable to provide sufficient trade to have kept the pub viable. The Black Bull therefore must remain as a pleasant memory of a simpler and bygone age. I feel privileged to have known it!
Posted by Paul Bailey at 21:30

Sounds fantastic! And not unlike some of the surviving country pubs in Kent especially the winding roads reference.

The Duke Of York in Elton (Derbyshire) maybe similar, albeit still open; Elton is a "magic" village that you can't seem to see on most approaches to it and perhaps because of that doesn't attract much passing trade. Hoping to get to it next year myself - if you are heading that way I'd advise either a 12-14.30 Sunday trip or a 20.30 onwards evening visit.

Thanks for the info thus far.

Glad you enjoyed this one, wee beefy. There are more like this to come!

It's a while since I last visited Derbyahire, but I do remember a good session in the unspoilt Three Stags Heads, at Warlow Mires. I was pleased so see it is still listed in CAMRA's National Inventory. Whilst on the website, I had a look at the Duke of York at Elton; it certainly looks like an excellent pub.

I can see me having to visit Derbyshire at some stage, as there seems to be a lot of NI pubs there.

Ah, the Black Bull...Your post brought back some happy memories, and made me think of the Man of Kent between Biddenden and High Halden: Fremlins on gravity,elderly landlady and a really inclusive bunch of regulars-you always felt at home there. Now the Raj of Kent, and probably doing a hundred times the trade.
I hope to be in Derbyshire very soon, and the Three Stags is on our list, though I doubt if I'll have enough good conduct points for the Duke of York!

I never had the pleasure, Dave of drinking in the Man of Kent, High Halden. It always looked a bit non-descript from the outside, but from the sound of it I missed out on a real gem.

ps. Lots of pubs round here have become Indian restaurants. I suppose it's a better fate than being turned into a Sainsbury's Local!

Great piece Paul. As I've said to you before, I envy ome of your pubs.

My Nan & great nan were the land ladies of the black bull, until the mid 80's, spent all of my summer hols there, wonderful place to live & grow up,huge joints of beef roasting in the aga ready for the sandwiches. went back a few yrs after they had given it up & it wasnt the same. think the locals moved onto the shepherd & crook at burmarsh

Hi, I also have happy memories of the Black Bull. Both my dad and my grandfather used to love going there. The lounge was like someone's front room, the roast beef sandwiches were delicious as were the home made pickled onions. If my memory serves me well one or both ladies used to play instruments in a big band. My dad, also a musician, used to spend hours chatting with them. The till was a wooden drawer with hollows in the wood for the cash. Such a lovely place ��.

I've just stumbled across these messages and I'm really interested to hear from and receive photos of The Black Bull in Newchurch for our village History site: http://newchurchvillage.org/history/changing-village1/

I have been unable to track any old photos of the interior and very few of the exterior. Any photos used will of course have "photo provided by ****" underneath.

Also where are the photos in the original post from - I can see a page number. Page 139 but which book is it from?