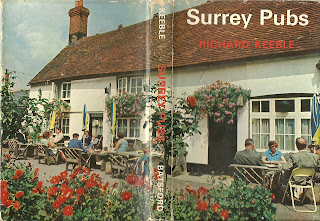 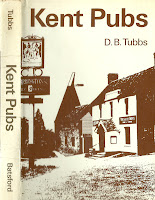 Back in the early 1960’s, the publishers Batsford produced a series of pub guides based either on counties, or regions. They also produced one on London Pubs. So far as I am aware, the series never covered the whole country and, apart from Oxfordshire & Buckinghamshire, was confined to East Anglia, London and the South East.

I now have all six of these guides, having just acquired, the one covering the adjoining counties of Oxfordshire & Buckinghamshire, courtesy of Amazon. This now joins the other five in my collection that covers East Anglia, Kent, London, Surrey and Sussex. Each guide was researched and written by a different author, in a broadly similar style, but with individual nuances, and the odd quirk, that make for an interesting and, at times, highly entertaining read. What is especially noteworthy about these guides is that the entry for each pub lists the owning brewery and, in the case of the Kent Guide, goes so far as to list the individual draught beers on sale). For those, like myself, who are interested in a bit of brewery history, this makes fascinating reading, and gives a glimpse of what drinkers in the 1960’s could expect when they stepped inside a pub.

So what were the pubs of this era like? Well, for a start the majority of them offered the choice of Public or Saloon bar in which customers could enjoy their drinks; a situation that still largely held true back when I first started frequenting pubs. As I get older and look back on what were undoubtedly simpler times, I find myself really missing the choice that a two-bar pub used to offer. A game of darts or cribbage with the locals, or a get together with the lads then the public bar was the obvious choice. Taking a girl out on a date, calling in for a bar meal or going for a drink with one’s parents, then it was definitely the saloon bar.

Heaven knows what possessed brewers and pub owners to rob us of this choice, but if it was in a mistaken move to remove class barriers and adopt a more egalitarian approach then they were grossly mistaken,  as the difference between the public and saloon bars were nothing to do with class, wealth or any similar misconceptions.  In fact it must rank as the greatest single act of vandalism perpetrated on our pubs within living memory! This point is made nicely in the Oxfordshire & Buckinghamshire Guide: The tendency in recent years for brewers to do away with public bars and enlarge the saloon is a n idea that can have unfortunate repercussions. Often not only do the public-bar customers vanish, but the “improvements” to the saloon result in a vast room of negative character, doing nothing to please the regular customers or to attract new ones. It seems people were thinking this was a bad idea back in the 60’s, but no-one took any notice!

Anyway, I digress, but without wishing to over-generalise, pubs were pubs 50 – 60 years ago, and whilst some may have had up-market pretencions, on the whole they catered for the needs of their individual communities far better than many of today’s pubs do.

It is interesting to note who owned what back in the 60’s; the “Big Six” were just starting to emerge, but the guides show that regional breweries, many of whom would later merge with similar sized concerns, or get bought outright by the fledgling large combines, owned the majority of the nation’s pub stock, but being local/regional, were well placed to cater for local tastes and needs. For example in Sussex Tamplins, Henty & Constable, Star Brewery (Eastbourne), Friary Meux and Brickwoods owned the majority of pubs, In neighbouring Surrey,  Charrington, Courage, Friary Meux and Watneys controlled most of the pubs, with a small handful being owned by Whitbread and Youngs.  Moving into East Anglia, the Norwich breweries of Bullards and Steward & Patteson, destined later to both be swallowed up (and closed) by Watney Mann, ruled the roost throughout most of Norfolk, whilst further south, and east, it was the likes of Trumans and Lacons (Great Yarmouth) that catered for local drinkers, with a healthy scattering of Adnams in Norfolk and Greene King in Suffolk.

London is a special case, as one might expect of the capital, in that most of the major brewers were represented, and most of them also still had breweries operating in the city. Thus drinkers would have had a choice of Charrington, Courage, Ind Coope, Manns, Truman, Watneys and Whitbread, along with a scattering of national brands from the likes of Bass and Worthington.  Interestingly, Friary Meux of Guildford owned quite a few pubs in the capital, due to the merger of  Surrey based Friary with Meux of Nine Elms, London. Of course none of these companies exist as separate entities today, and none have breweries based in the capital..

Returning to my home county of Kent for a while, by far the largest brewers at the time were Fremlins of Maidstone, who offered a wide range of different beers, including a mild, several bitters of varying strength, plus old ale in winter. Next were Courage who, whilst based in London, offered a variety of different brews that also included the then legendary Directors, which was produced at the group’s brewery at Alton in Hampshire. There were also a number of smaller brewers based in the east of the county which included Mackeson (a Whitbread subsidiary since the 1920’s), Tomson & Wotton and Cobbs (both of whom were largely confined to the Isle of Thanet).

Oxfordshire and Buckinghamshire make interesting reading, with both counties blessed with a number of local and several different regional breweries, most of which have now vanished. For example, whilst Courage (following their merger with Simonds of Reading) and Ind Coope were the major pub owners in the two counties, companies like Wethereds and Benskins were not far behind. One could also find pubs belonging to Flowers, Henley Brewery Co (Brakspears), Hunt Edmunds (Banbury), Morland (Abingdon) and Morrells (Oxford). A number of other breweries also get a mention, including Harmans (Uxbridge), Hook Norton, and Phipps (Northampton).

There was also one pub  company which despite owning a large number of pubs, particularly in Buckinghamshire, did not brew; the Aylesbury Brewery Company ceased brewing in 1937, but brought in beer from other breweries (primarily Ind Coope at the time the guide was written), as they considered this more economical than producing the beer themselves. This arrangement continued until 1972, when the company was acquired outright, by Ind Coope’s successors – Allied Breweries..

There is a wonderfully ironic passage in the Oxfordshire & Buckinghamshire guide about beer which reads as follows: The beer is Flowers, and it is all from the keg - there is no draught. For the older bitter-drinker, set in his ways and notoriously critical of his beer, this might, perhaps, be considered a drawback. But this is the tendency today, and the generation now beginning to develop a palate for beer will one day describe to their grandchildren those far-off days when the beer came in wooden casks, and needed such care before it was ready to sell.

These six guides provide a fascinating snapshot into a world of pubs and beers that has changed out of all recognition, and in some places vanished altogether. It is a world that precedes the start of my drinking career by some 10 years, but is a world I can still connect and empathise with; a world that is at times still familiar yet at other times distant.

If anyone knows of other guides in this series, apart from those mentioned above, I would be most grateful if they could  please let me know.
Posted by Paul Bailey at 15:36

Interesting stuff, attitudes towards keg beer, particularly it being the way forward, are presumably quite unusual in traditional pub guides.

Its amusing to read the author considering the older bitter drinker to be out of touch with the brave new world, and still interested in silly old wooden casks dispenisng beer requiring cellarmanship skills to sell.

I know in my Dad's social circles the idea of choosing keg over cask never came into it in the 1960's and 70's - because they almost never came across a pub selling anything but cask!

Which means its a shame the guide never got to the North West and Cheshire, where he used to sup.

wee beefy, attitudes towards keg beer seemed to vary between the authors of these guides. The author of the Kent Guide, for example, had no truck with keg beer, as the following comments testify:
"The mild and bitter are well kept, and served straight from the wood, and if you don't know the difference that makes you shouldn't be drinking draught beer at all." OR
"Whitbread Tankard and Watney's Red barrel, if you want the keg stuff?" ANd FINALLY,
"In the event of your liking pressurised draught beer you will find five to choose from."

I think that back in the 60's pubs were in a state of flux. Keg beer was certainly starting to raise its ugly head, and most of the pubs in these six guides did stock it (usually that of the owning brewery). Even then though it divided opinion, with most seasoned beer drinkers refusing to touch it with a bargepole, whilst those who's palates were, shall we day, less refined, and not used to strong, distinct flavours, positively welcomed it. I still cringe when I recall the moment, back in my late 20's when I was standing at the bar of a pub serving traditional ale, and two "silly old duffers" dresssed in golfing sweaters and plus-fours, marched up to the bar and asked for "Two halves of keg." Priceless!!