Keeping Out the Cold 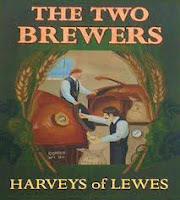 On what must have been the coldest night of the year on Wednesday, the sight of Harvey's Christmas Ale on the bar of the Two Brewers in Hadlow was certainly a welcome one! Six of us had travelled out there by bus for a pre-arranged West Kent CAMRA branch social.

The Two Brewers is a Harvey's tied pub; one of only a handful in Kent. Since the brewery acquired it in 2005, and thankfully changed its name from the Fiddling Monkey (often referred to as the "Piddling Monkey"), the pub has seen a  succession of different licensees. Part of the problem has been the relatively small garden and car park at the pub, as the previous owners sold off much of the land at the rear for housing. However, under its new licensees, the Two Brewers now appears much more settled, and we were given a warm reception from  our hosts last night. 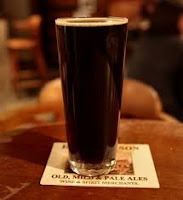 On sale alongside the Christmas Ale were Mild, Hadlow Bitter, Best Bitter and, my personal winter favourite, Harvey's Old Ale. Owing to the vagaries of public transport during the evening, we arrived early but also left early, but not before a few pints of Old plus a half of Christmas Ale to finish up on. The latter is definitely a desert island beer, although whether one would wish to drink it on a hot tropical island is open to debate. Last night though it was the perfect balance of a strong dark bitter-sweet ale, satisfying and warming, but obviously a beer to be treated with respect. The pub was selling it at £2.50 per half pint, which for a beer of this strength and character is good value.

Back in Tonbridge, a couple of us nipped in to the Humphrey Bean, to see what our local JDW had on offer. Resisting the temptation to try the Thornbridge Jaipur, not a good idea with work the next morning, I settled for the Adnams Gunhill. Not quite as rich as the Harvey's Old, but still a very drinkable 4.0% winter beer. My friend opted for a dark beer from Pilgrim Brewery, who's name escapes me.

Despite plenty of layers, combined with hat, scarf and gloves, it was still freezing on the walk home. However, it had certainly been worth venturing out on such a night and making the journey over to Hadlow.

The bottle label above shows the abv of Christmas Ale as being 8.1%. Harvey's have since reduced the strength slightly to 7.5%. Presumably this is to avoid the beer falling into the higher tax band, brought in as a "knee-jerk" reaction to restrict the sales of "super-strength" lagers (Carlsberg Special Brew et al.).