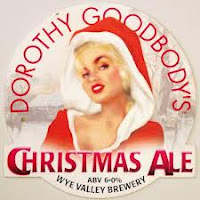 I know I'm rather late with this one, especially as the beers in question have been on sale for several weeks now, and known about for a few more before that as well. No matter, the other day I was thumbing through a copy of Wetherspoon's house magazine when I came to the page giving details of the so-called Christmas Ales they would be featuring over the festive season. There was also a write up on the subject by Jeff Evans, author of CAMRA's Good Bottled Beer Guide and well-respected beer writer to boot.


Jeff's article is, as one would expect, well written and well laid out. It begins with a look back to those times, as little as 30 years or so ago, when Christmas was the only time of the year one could expect to see something different on the bar apart from a brewer's mild, bitter and possibly best bitter.  He contrasts this with the situation today when, at this time of year, there is a whole plethora of so-called Christmas Ales weighing down the nation's bars Jeff picks out  a few of his favourites, and whilst he does make mention of the silly Christmas-themed puns that are all too common, as he was obviously writing a commissioned article for JDW doesn't really come down too hard on  the weak sounding names, and equally weak strength, of some of the beers,

I can certainly remember when the situation Jeff  harks back to was the norm, when Christmas Ales really were something special, rather than just a slightly reddish coloured best bitter with a silly name and equally silly pump clip. Whilst I obviously welcome the far greater availability of seasonal ales today, I do feel that the whole Christmas thing has been dumbed down and lost its meaning.


So what do I look for in a Christmas beer? Well, a decent strength to start with; ideally something around 6.0% and certainly nothing below 5.0%! I also like my Christmas ale to be dark in colour (brewers please note: ruby is NOT dark!),  full-bodied and well-hopped. Far too many of today's festive offerings are pale in colour (sometimes even golden!), low in strength and low on taste. The only thing Christmassy about them is the name on the pump clip, and all too often that is a silly pun or spoonerism with a dubious Christmas connection.


My all time seasonal favourite  is Harvey's Christmas Ale,  a beer I have written about on several past occasions, including a fairly recent post. I have also in the past, enjoyed Hook Norton's Twelve Days, another fine dark ale, not as strong as Harvey's, but still a welcome sight on a pub bar. Last night's West Kent CAMRA social in the Bedford, Tunbridge Wells, ended on a high note for me, with a glass of Old Dairy Snow Top, a dark warming 6.0% abv Winter Ale, not exclusively brewed for the Christmas period, but still much appreciated at this time of year. I managed to pick up a bottle of this excellent beer, whilst back over the Wells today. Being bottle-conditioned, it needs to stand for a day or two, but it should be ready for drinking on the big day itself, which is now just a few days away.

There will be more on my own selection of beers for Christmas a bit nearer the event itself.
Posted by Paul Bailey at 16:57

Glad you found some Snow Top, we continue production as long as we can because we're fond of it at the brewery. It will also be gracing my table on the big day.

The Bedford also had Copper Top on last night Ed, and that was very good as well.

Enjoyed Snow Top at the Benenden Bull a couple of weeks ago:lovely stuff, selling like hot cakes.More than made up the disappointment of not finding Larkin's Porter.I tried it in bottle and found it slightly cloying, but from cask it's a classic.

Definitely a good drop David, and a decent strength to boot! Larkins Porter has been a bit hard to find this year, (apparently, like Old Dairy Snow Top, it's been selling like hot cakes), but I finally caught up with a glass on Friday - at the brewery in Chiddingstone.

I'd popped in to deliver a Christmas card and Bob very kindly offered me a glass and invited me in for a quick chat, (I used to be CAMRA BLO for Larkins). The Porter was in tip-top form, and the batch I sampled was the second brew of the season. Excellent stuff and well worth persevering with your efforts to track it down!