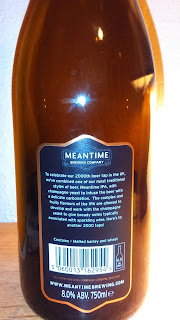 I am a big fan of Meantime Brewery, with an appreciation of the company and its beers which goes back many years; so when their PR people sent me a bottle of  IPA 2000 to review, from their “Brewers’ Collection”, I was both flattered and delighted.

IPA 2000 is a limited edition brew of just 1,200 bottles, with each one individually numbered. It is also a big beer in several ways, not least of which is its presentation in a wired corked, 750ml bottle. The other “big” selling point is its 8.0% ABV.

According to the bottle the beer was brewed to celebrate their 2,000th beer tap; although initially I wasn’t sure what exactly is meant by this rather American sounding term. Apparently it refers to the brewery achieving its 2,000th beer tap listing, although I’m not quite sure how they keep such close tabs on what must be an ever changing market.

So what about the beer itself?  Well unfortunately, in spite of my  high initial expectations, this particular brew doesn’t do it for me at all. The clue lies with the rest of the write up on the back label, as the brewery claim they have combined one of their most traditional styles of beer (Meantime IPA), with Champagne yeast to infuse the beer with a delicate carbonation.

And there in lies the rub, as the label goes on to say that “The complex and fruity flavours of the IPA are allowed to develop and work with the Champagne yeast to give bready notes typically associated with sparkling wines.” Personally, I think the Champagne yeast has worked against the flavours of the IPA and smothered them. So sorry Meantime, this beer really doesn’t do anything for me, and whilst this might have been considered an interesting experiment, it hasn’t worked for me.

I am sure there are many out there who will really rave over this beer, but unfortunately I’m not one of them. This may sound rather churlish, seeing as I was given the beer for free, but I speak as I find, and whilst the beer has obviously been brewed according to the best traditions of Meantime, I am not at all keen on it.

I realise there are all sorts of strange fusions going on at present between the worlds of brewing and wine-making, and I saw plenty of evidence of this in Belgium last year with strong beer being matured in oak barrels formerly used to hold Burgundy wines. To me, these are novelty beers; interesting to try on the odd occasion, especially alongside certain foods, but I know what I like in a beer and feel that using Champagne yeast to ferment this beer muddies the water and detracts from the flavours and aromas one would expect from the malt and the hops.

Sorry Meantime, especially as I’m certain you were expecting a more positive review. That’s probably me off the Christmas card list, or worse and no more invites to new beer launches, but despite this I’ll continue looking out for your more “normal” beers, and more traditional styles, in both the on, as well as the off-trade.
Posted by Paul Bailey at 20:34

You have to say as you find. Fortunately I have yet to be tempted to give a excessively rosy review as no one has sent me any freebies. Not much point, really, as I'm not much good at tasting notes: I can never detect the flavours of apricots, biscuits, long coffee finishes or crushed cockroaches that others so blithely describe.

Seriously, I think it was a case of a brew too far, and unfortunately indicative of what is going on in certain sectors of the brewing industry at the moment. One day things will go full-circle and people will come back to beer brewed from straight forward malt and hops, and fermented with a proper, traditional English ale yeast!