After two posts with a somewhat negative theme running through them, this one is far more positive and upbeat, with some good news concerning a local business which is expanding its brewing operation. 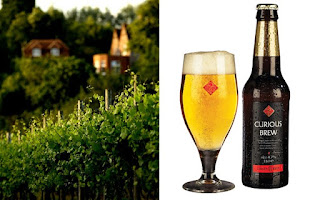 The Chapel Down Winery, who are based at Tenterden, in the heart of the Kentish Weald have embarked on a crowd-funding campaign to develop further the brewing side of their off-shoot Curious Drinks division. Readers may have noticed some of their Curious Brew products, on the shelves in Waitrose. The range includes an IPA, a Porter and a cider, plus a lager, called "Curious Brew", which is re-fermented with Champagne yeast.

Now I realise I slated Meantime  in a recent post, for doing the very same thing with their strong IPA, but having tasted the Chapel Down product, I can safely say it is far cleaner tasting, and far more refreshing than the one which Meantime came up with recently.

At the moment, the beers are all contract-brewed (I don’t know about the cider), by Hepworth & Co in Horsham, but it was always the intention of Chapel Down to switch the production of these products to an “in-house” operation; hence the crowd-funding campaign.

I’ve picked up on this story quite late in the day, as the crowd-funding operation is nearing its end and approaching its target. This was initially £1 million, but in an interview in the “Index Magazine", (a glossy publication, promoting various aspects of local life in Kent and Sussex, and distributed free each month to local homes), Chapel Down Chief Executive, Frazer Thompson, expressed optimism that the final total will be around £1.5 million by the end of February, when the fundraising is due to finish. 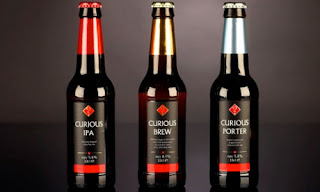 He spoke regarding the creation of a “dedicated brewing facility” in nearby Ashford, which would be responsible for producing the full range of the company’s beers, as well as housing a visitor centre. He went on to say, “With Kent being the home of hops, it’s fantastic that we should be doing this here in the county, with our Curious Brew products. But we don’t just want people in Kent to be drinking them; we want them to be something known all over the world.”

Chapel Down have obviously got big ideas, and it will be interesting to see in what ways the Curious Brew side will expand, once the new plant has been built and is up and running. I can envisage an expanded range of beers as well as draught versions of some of them; although whether the company will want to offer cask variants remains to be seen. In the meantime, keep an eye out for some Curious Brew heading your way; and there is still a couple of weeks left if you wish to contribute to the crowd-funding.