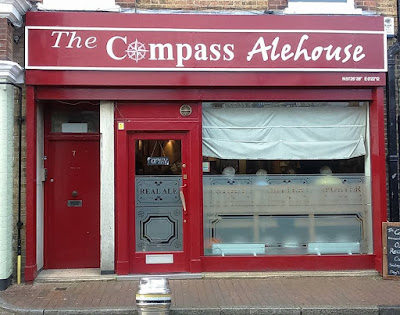 Earlier today, I visited the Compass Alehouse in Gravesend, in the company of my brother-in-law, David who lives in the town. It was only a fleeting visit, but I was impressed with this clean, bright and airy micro-pub, which has only been open for 15 months.

David calls in at the Compass most Thursday lunchtimes, so he knows quite a few of the regulars, as well as the owners. We arrived shortly before 2pm, and whilst there were a few seats left around some of the high tables, we decided to stand. On tap were Dark Star Hophead, Gadds No. 5, Goachers Gold Star and RCH Old Slug Porter. All beers are on gravity dispense, and are served from an impressive array of casks kept in a temperature-controlled room at the rear of the pub.

I stuck with the Dark Star, as I was driving, but David said the Goachers was also good. Not long after we got there, more people began arriving, but everyone moved up and all those who wanted to sit down were able to do so. There was a good atmosphere in the pub, and being in such close proximity we all ended up talking to one another.

From what my brother-in-law was saying, the Compass has attracted a fair bit of local trade, and certainly makes a welcome change from the nearby Wetherspoon’s . I am certainly tempted to make a return visit, although next time I will make sure I arrive by public transport!

Footnote: no interior shots, I’m afraid as not only was the pub rather full, but the use of mobile phones is actively discouraged.

I'm glad you enjoyed the beer Paul. The Compass was one of those pubs I was thinking of that seemed to have been voted into the current Beer Guide (2016) within a matter of months of opening.

It's on my list to visit, but has quite limited opening hours in common with most micros so I've been unlucky so far.

Those tall tables are often a feature of micros too, and not to everyone's taste !

Gravesend has some fantastic pubs for a town of its size.

Martin, yes the beer was good at the Compass and yes I am also sure there is the temptation amongst some CAMRA branches to vote micro-pubs into the GBG with premature haste. My brother-in-law told me the Compass does have limited opening times, which may be due to the owning family having other commitments. Possibly more than some, this particular micro is run as a “hobby pub”, although without knowing the full facts it is difficult to say for definite.

I like micro-pubs, but they are not the panacea to the problems facing the licensed trade which many pundits claim. On the whole, a traditional pub offering the full package, including food, has more appeal. It’s difficult to say after only one visit, but the clientele in the Compass were all middle-aged or older.

Like my brother-in-law, I could quite easily get into the habit of visiting such an establishment, were it not for the fact that a four letter word called “work” gets in the way! David, by the way, is retired, so such restrictions do not apply to him.

I’m not sure about Gravesend’s other pubs; we passed two boarded up town centre boozers in the, both with attractive tiled facades, but both with the usual history of rising rents and falling demand. Another former pub (the Trocadera), just around the corner and also with some fine exterior tile-work is now a flower shop. The Robert Pocock, the town’s JDW outlet, is also nearby. According to my brother-in-law, it is not one of the company’s best outlets.