For the past 10 years I have worked for a company which specialises in the manufacture of dental materials. The firm is based in the village of Chiddingstone Causeway; a small settlement about 6 miles west of Tonbridge. The village is a relatively modern one which sprung up around Penshurst station, on the Tonbridge to Redhill line. One of the quirks of the Victorian railway era was that many stations were often several miles from the places they were named after.

Penshurst is no exception, with the village being some two miles or so away, but it is worth noting that the station was originally built to provide rail access to Penshurst Place; ancestral home of the Sidney family, and one of the most complete surviving examples of 14th-century domestic architecture in England.

The settlement which grew up next to the station became known as Chiddingstone Causeway. The “Causeway” part of the name is thought to refer to the route across boggy ground towards Sevenoaks, whilst the first part comes from the nearby village of Chiddingstone; a much older settlement which dates back at least to Anglo-Saxon times, and possibly before.

There is also a small hamlet called Chiddingstone Hoath, which is about two miles to the south of Chiddingstone village. The three settlements are known collectively as “The Chiddingstones”; a name which is also the title of the local Parish Magazine.

The initial settlements which grew up around Penshurst station, were those connected with the transport of rich and famous visitors to Penshurst Place. Before long these businesses developed into shipping firms, set up to transport farm goods to the towns via the railway, and soon after a number of other small businesses sprung up.

The most famous of these was the firm of Duke and Sons, who started to make cricket bats and balls in the 1860's; initially for Penshurst Place but then, due to the proximity of the railway, to sell further afield. When I started with my present firm, the former premises of Duke and Sons, housed the company offices, but in late 2008 these were relocated to the main manufacturing site across the road. A row of new cottages now occupies the site.

Because of the increase in population a church was built of corrugated iron but in 1898, as congregations increased in size, an attractive stone church was erected towards the crest of the hill, and dedicated to St Luke. Nowadays the village consists mostly of housing, a few local businesses, of which my company is the largest, plus a shop and post office. There is also a pub in the village, and as this blog is primarily about beer, the local hostelry is well worth a mention.

The pub started life as the Station Tavern; an appropriate name given its location directly opposite the station. It is an attractive late 19th Century building which despite being enlarged over the years, still retains much of its original character. For most of the last century, the pub traded under this name until it was bought by a jazz and big-band enthusiast and renamed the Little Brown Jug, after the well-known Glen Miller tune. 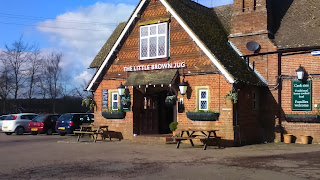 By the time I moved to the local area, the pub had been the Little Brown Jug for quite a number of years. The big-band enthusiast landlord was called Don, but that is all I remember of him.  As far as I recall the Jug was a Charrington’s house, and back then, it still had two bars. A change of management, in the later 1980’s, saw it dramatically increased in size, with new kitchens, a function room and even bed and breakfast accommodation added.


The new owner was a shrewd businessman called Charlie Cannon. He was a nice chap with a genuine interest in “real ale”, which obviously endeared him to the local CAMRA branch (myself included), but more tangibly saw a wide range of different cask ales being sold at the pub. One evening, Charlie gave a group of us a tour of his cellar; such was his pride in the beer he sold at the Jug.

Sometime towards the end of the 90’s, Charlie received an offer he couldn’t refuse, so he sold up and moved on. I think it was around this time that Greene King appeared on the scene. The extensive range of interesting beers was replaced by standard GK offerings and the pub fell out of favour with the local CAMRA branch, and generally off the radar altogether.

In the summer of 2006, I started work at my present company, and gradually renewed my acquaintance with the Little Brown Jug. Further alterations were made to the pub, with the B&B accommodation converted into additional dining space. It opened in its most recent incarnation in February 2007, and I must say the design team did a pretty good job on it. Although tied to Greene King, the Jug is owned a company called Whiting & Hammond, who operate a small chain of food-oriented pubs in this part of the county. The beer is still standard GK stuff, but local favourite Larkin’s Traditional is stocked, and is probably the pub’s best selling cask beer – certainly amongst the locals!

I've obviously known the pub over the years, especially as it's easy to reach by train, but despite walking past it most lunchtimes it’s not that often I call in. I am not a fan of lunchtime drinking these days; especially when I am working, but the Jug has been the venue for several memorable company Christmas meals, and it’s something of a tradition to pop in for a few beers when we close for business at lunchtime on Christmas Eve. The pub is also the obvious place for entertain customers, and I have been fortunate to partake of quite a few excellent lunches there.

If you walk up the hill from the Little Brown Jug, you will come to a tarmac footpath, on the same side of the road and just past the church. This will take you across an old World War II airfield to the Greyhound pub, situated in the tiny hamlet of Charcott.

The Greyhound is a pleasant bright and breezy local, with views across the fields towards the hills that form the start of the High Weald. It has a separate restaurant area, as like many country pubs these days it relies heavily on the food trade. There still seems to be three distinct areas in the main part of the pub, although the divisions that marked the former bars are long gone. During the winter months, open fires supplement the central heating. 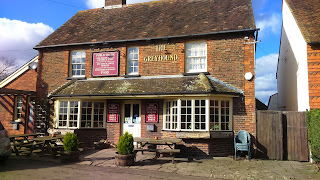 The Greyhound is close to my workplace, and I often walk by during my lunch break noting the substantial number cars parked outside. The other day, I noticed Harvey’s Best, Tonbridge Copper Knob and a Westerham beer on sale, but the Greyhound has also featured Otter beers in the past. There is a secluded garden to the left of the pub, plus benches and tables directly outside.

Both pubs are easy to reach for those not fortunate to either live or work in the village. Penshurst station is just two stops from Tonbridge, on the line out to Redhill, and there are also buses from Tunbridge Wells.