Not Cutting the Mustard 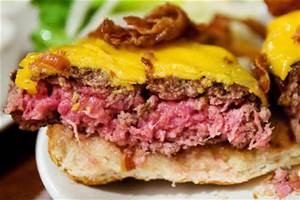 Fellow blogger The Pub Curmudgeon wrote a post a week or so ago, regarding what to do when food in a pub or restaurant isn’t quite up to scratch. The gist of the post was that it is often far easier to return an off-pint of beer than it is food; even when the latter is obviously not right. Blogger Ed Wray commented that it could be unwise to return food, owing to the risk of kitchen staff spitting on, or in it, before they bring it back to you. I backed up this concern with some horrendous stories of kitchen staff exacting their revenge in even more grotesque ways. These actions were recounted to me by a work colleague whose wife used to work in a restaurant.

Leaving these particularly unpleasant stories to one side for a while, Curmudgeon went on to recount how he’d had to return food in various pubs when things weren’t to his liking. He admitted to being a fussy eater; something which I certainly am not. With one or two exceptions, I will eat most things, but the article did  prompt me to think back to a couple of occasions where I had cause to either return my food, or had ended up leaving most of it on the plate.

Fortunately these instances have been quite rare, but oddly enough they both took place last year. The first "food fail" happened just over a year ago, whilst on a CAMRA bus trip in which we visited a few pubs in the Edenbridge area. I haven’t named the pub where the event took place; especially as it was over a year ago. If you are desperate to know which one it was though, I suggest you take a look back to a post I made last February.

To recap we stopped for lunch at a pub in Edenbridge itself, where unfortunately the liver and bacon I ordered was definitely not up to scratch. Not only was the bacon tough chewy and rather fatty, but the liver was undercooked; in-fact it still looked bloody in the middle. Needless to say I didn’t eat it, but I brought it to the attention of the bar staff who weren’t at all sure what to do about it.

It turned out that the licensees were away, and I suspect that had they been present this incident would either not have occurred, or it would have been rectified to the satisfaction of both parties. For my part, I haven’t been back to the pub, and if I do return I will definitely not be eating there.

The other incident, where I was unable to eat what was put in front of me, was in no way the fault of the restaurant concerned; but rather my not liking the manner in which the food has been prepared. This particular "food fail" occurred last August on the evening of the first day of the European Beer Bloggers & Writers Conference in Brussels. It took place in the sumptuous surroundings of the Belga Queen, which is one of the Belgian capital’s finest restaurants.

Our hosts for the evening were the Belgium Family Brewers;  the elite sponsors of the conference, so after the day’s proceedings had finished we all walked the short distance from the conference hotel to the Belga Queen. Here we were to enjoy a three-course dinner, with an impressive selection of Belgian beers to accompany, in the opulent surroundings of this renowned restaurant.

Now this was all happening courtesy of the Belgium Family Brewers, so it seems rather churlish of me to criticise. The meal was a set course, although had I known what was going to be served up I would have gone for the vegetarian option! Roast rack of veal, was the main course – bloody, fatty and far too underdone, for my liking.  Unfortunately for me, this is how the Belgians like their meat! As stated earlier, I am not a fussy eater, but I am not a fan of meat which is rare, bloody or otherwise undercooked. Leaving health issues aside, I find rare meat more an exercise in chewing than enjoyment, and fail totally to see the attraction.

I ended up leaving most of the barely-cooked veal, but the potatoes, vegetables and gravy were good, and were sufficient to “fill a hole”. I wasn’t overly concerned, especially as someone else was picking up the tab, and by way of compensation, the company at my table was very good; as was the conversation. In addition, the Belgian beers presented to us were all top-notch and helped increase our appreciation, enjoyment and knowledge of the country’s brewing traditions. We later moved on to the nearby Delirium Bar, where yet more strong beer was consumed.

It seemed however, that I was not alone in my distain of the main dish, as on the walk back to the hotel, I joined several other delegates in popping into a nearby kebab shop for some chips. Posh nosh is not always what it’s cracked up to be, and when you’ve had a belly full of beer you need some real “comfort food” to help soak it up!

I had some rather strange and exotic food placed in front of me on a business trip I made to Japan, back in 2013, but with the exception of the raw octopus, I managed to eat virtually everything which our hosts offered. The saving grace with Japanese meals is that a range of several dishes are presented to the diner, and you then help yourself; in theory to a portion of everything, but in practice just those items you think will be the most satisfying and least off-putting! The other saving grace is that copious amounts of beer are normally served at mealtimes. This certainly helps wash down food which might not quite be to your tastes, as well as helping to cleanse the palate and mask strong or unfamiliar flavours.

I have digressed somewhat from the question of whether or not to return food which isn’t to one’s liking. As mentioned earlier, my colleague’s wife worked in several restaurant kitchens, and had some horrendous tales to tell about what happened to customers foolish enough to return their food.

As I am sure you can imagine, many chefs have vastly over-inflated egos; just think of certain so-called “celebrity chefs" and you will know what I mean. They tend to take any criticism of their cooking, however well intended, as a personal affront. My kitchen informant recounted horror stories of bogies being mixed into food which had been sent back, as well as spit, but the worst one involved a returned steak. This was unceremoniously wiped around the inside of the toilet pan before being returned to the unfortunate and clueless customer.

I would like to think that most kitchen staff wouldn’t dream of acting in such a disgusting, and potentially heath-threatening manner; if they did, then they should never be allowed to work in catering again. But as it is difficult to know what exactly goes on behind the closed doors of a pub restaurant or kitchen, and hard to predict just how widespread such practices are, I would ere on the side of caution. So if you are served with a meal which isn’t quite right, don’t be too hasty in sending it back.

You may be better off just leaving the food, but if you feel sufficiently strongly about its poor quality, bring it to the pub or restaurant management’s attention. At the very least you should be entitled to a reduction in your bill. In the light of what I have described above, be wary of offers of vouchers or a free meal next time, as you may find the staff remember you, and not in a nice way!

However, most people out for a meal are not looking for confrontation, especially as this can further sour what should be an enjoyable occasion. If this is the case you may just prefer to never eat in that place again. Spread the word amongst your friends and family, if you feel that put out by your experience.

It’s a tricky thing, as we Brits don’t like to complain and cause a fuss, but if we wish to see high standards maintained in our pubs and restaurants, we really should say something; even if it is after the event.

Good post, although I think I should clarify that I was not talking about food that was "not quite up to scratch" but which was completely inedible!

My experience is that the main complaint about bad food in pubs is that it is seriously undercooked, and the second is, as in one of your examples, getting extremely tough, fatty, gristly meat.

I've also had one or two examples where the actual dish turned out to be completely different from how it was described on the menu, although I can't recall the precise details.

Thanks for the correction Mudge. Food which is inedible, due to being seriously undercooked, is an obvious health hazard, but unless it’s something like a steak, where it’s easy enough to pop it back under the grill and cook it properly, I don’t think I’d want to risk having it re-heated. My undercooked liver was a case in point, as its practically raw state had the potential to contaminate everything else on the plate!

Complaining when there’s nothing inherently wrong with the food, apart from it not being quite to your liking, does run the risk of rubbing up the kitchen staff the wrong way, and as with a pint of beer which isn’t bad enough to send back, it might be better to keep quiet.

Serious faults, such as undercooking, do warrant further action, and whilst accepting that anyone can make a mistake, the establishment concerned need to realise that such errors can seriously affect people’s health. If they are genuinely sorry, then fair enough, although even then it may be worth a quiet word with your local public health department. You may well be doing your fellow human beings a big favour!