What Am I Supposed To Do With These? 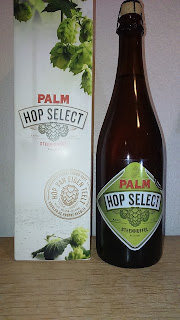 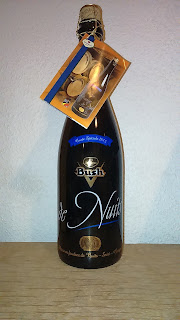 What am I supposed to do with these? Well, drink them is the obvious answer, but it’s not so obvious with one of the beers. At 13% ABV, and packaged in a corked 75cl, screen-printed bottle, Bush – Scaldis Prestige de Nuits is a beer which isn’t going to take any prisoners. Matured in large oak casks, which had previously contained the famous Nuits Saint Georges wine, this special beer then undergoes a further conditioning in the bottle.

I was given the bottle when I visited the Dubuisson Brewery, in the village of Pipaix, in the Belgian province of Hainaut. The visit formed part of the European Beer Bloggers Pre-Conference Excursion, and was the final stop on what proved a packed and very beery day. We had dinner at the restaurant attaché to the brewery, and afterwards (or was it before?), we were shown the cellars beneath the brewery where the beer matures in these impressive oak casks.

All well and good, and never look a gift horse in the mouth, but there is no way I am going to drink that volume of a 13% beer on my own. My family won’t help, as my wife doesn’t drink and my son is an out and out Stella-drinking “lager lout”. We are not expecting any visitors over Christmas either, so I think the beer will just have to be laid down until a suitable occasion arises.

As for the other beer; well that too was a gift, and ironically enough it was acquired on the same beery trip, but this time at our first port of call. This was a rather up-market marquee, overlooking a hop garden planted in the grounds of the Palm Brewery headquarters, in the village of Steenhuffel, to the north of Brussels. We had stopped there for lunch, plus several beer tastings, on one of the wettest August days imaginable. The marquee had been erected for an event scheduled to take place a few days later, when the hops in the adjacent fields would be picked, and then taken away to be used in the brewing of the Belgian equivalent of “green hop” beer. 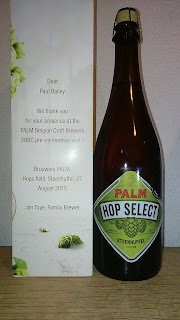 The other large 75cl bottle contains a “triple-hopped” beer, called Palm Hop Select. According to the label, the beer is hopped three times, the last addition being the “home-grown, aroma rich, Hallertau Mittelfrüh hops from Palm’s own Belgian hop field, are added”. These were the lovely ripe, bright-green cones we could see, hanging in abundance, just a short distance away. I need to find my notes from the trip, but I’m pretty sure this beer was the first we sampled that day.

At a mere 6% I will probably manage this one OK, but it will still require care in pouring as it is another bottle-conditioned beer, so the final question to ask is why do some brewers fill their beer into such large bottles? There is no single correct answer, but brewers do this for reasons of exclusivity, (as in the case of these two beers), but they also do it to enable the beer to be shared amongst friends, (something essential when dealing with a 13% ABV beer!). A beer packaged in one of these large bottles, also makes a nice gift; especially at this time of year. Finally, and probably most important of all, the above reasons all mean that brewers can sell these large bottles at a premium price.
Posted by Paul Bailey at 22:57

I've seen those 75cl high-strength bottles, of both Belgian and UK breweries like Beavertown, at daft prices in modern bars in Falmouth this week - £25-40 range. Presume groups of 4 or more students drink them in an evening; at least they have proper glassware.

I suppose the answer is "find someone else to help you drink it" but, even so, it seems daft to put such high-strength beers in non-resealable 75cl bottles, especially if bottle-conditioned and thus needing to be decanted all at once.

Martin, students must be better off than they were in my day, and with four people sharing a 75cl bottle, that’s less than half a pint each!

Mudge, I agree entirely that it’s crazy packaging this volume of a bottle-conditioned, high-strength beer into a non-resealable bottle. The Belgians don’t seem to mind hazy beer, so trying to decant the contents in one go isn’t so much of a problem for them. As for sharing, well I’ll pass on the suggestion from one of my work colleagues that we open the bottle in the staff canteen, on Christmas Eve. The Prestige de Nuits is a beer which deserves treating with respect. Drinking it out of chipped coffee mugs, in a staff canteen, somehow doesn’t have quite the right ambience!

It's going to be end of mine day, except before end I am reading this impressive article to increase my know-how. Remember to visit my blog if you have some time: สล็อต

I pay a quick visit every day a few sites and websites to read posts, except this web site gives feature based content. Remember to visit my blog if you have some time: สล็อต