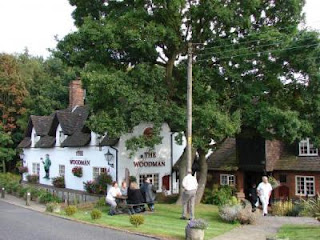 It’s strange how sometimes you can be living somewhere and not really know what is literally at your feet. I’ve resided now in the pleasant town of Tonbridge for 30 years; literally half a lifetime, so there aren’t many pubs in this part of West Kent which I haven’t visited.  Until yesterday evening, the Woodman at Ide Hill was one of them, but all that changed when I joined some of my work colleagues, plus visitors from Japan, for a meal at this attractive, but isolated free-house.

The company I work for is a wholly owned subsidiary of Japan’s second largest dental manufacturing company. Every year, at around this time, a number of top officials from our parent company make the trip over from Japan for a directors’ meeting. Other meetings take place as well, but it is something of a joke amongst us that the visitors really come to do a spot of Christmas shopping; even though Christmas is a festival which is not really celebrated in Japan!

No matter, as it is always good to meet up with our overseas colleagues and to spend time together discussing projects and issues of mutual benefit. One longstanding tradition is that of going out for a meal with our guests, so yesterday evening we  headed over to the Woodman at Ide Hill; the venue selected by our General Manager for this year’s informal evening get-together.

Ide Hill is a small village situated on one of the highest points of the Greensand Ridge about five miles south-west of Sevenoaks. To the west of Ide Hill, but separated from it by an area of woodland, is the tiny hamlet of Goathurst Common, and it is here that the Woodman is situated. It was a wild and windy night as our taxi driver negotiated the narrow country lanes which traverse this densely wooded area, so we were glad when the lights of the pub appeared as we pulled into a clearing. It was then that I caught my first sight of the Woodman. 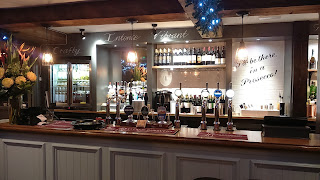 It’s hard to describe the exterior of the pub, as not only was it dark when we arrived, but we entered and left by the rear. It was evident that the interior has recently had a make-over, and whilst there were signs of obvious antiquity, it was difficult to discern which parts were original and which were modern additions made to look old by the use of old and reclaimed oak beams.

The interior certainly seemed Tardis-like, and with two levels. The bar was at the lowest level and to the rear of the pub. There was reasonable, but not terribly imaginative selection of cask ales – Harvey’s Sussex Best, Otter Bitter and the dreaded Doombar, whilst the keg offerings included Meantime London Pale Ale, Pilsner Urquell, Moretti and Noble Lager (from Greene King). I stuck with the Harvey’s - my first drop of English ale since returning from Austria 10 days before, and can report it was in excellent condition. 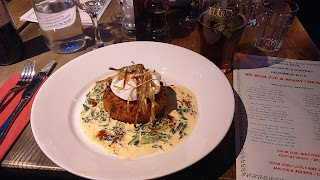 The food was good too and we had a most enjoyable evening with our Japanese visitors.  The pub itself was strangely quiet; although I imagine the foul weather had put people off from venturing out, but without our party of 13 it would have been virtually empty. One nice touch was a group of local carol singers had been booked to entertain the guests (and, I suspect to practice as well), and whilst they were singing some distance from where we were sitting, their presence (and carols) added a nice pre-Christmas touch to the evening.

Having whetted my whistle, I intend making a return visit to the Woodman, but in daylight next time. There are some good walks around this part of the Greensand Ridge, and a lunchtime stop at this tucked away pub would add to the pleasure of a ramble through the woods and hills of this attractive part of the county.
Posted by Paul Bailey at 23:09

Christmas is actually quite big in Japan, but as what might be called a retailing promotion opportunity rather than anything religious. I spent one Christmas in Tokyo a few years ago and the decorations on the shops were very impressive. However, they all come down promptly on the 26th and by the afternoon it was as if nothing had happened. Christmas Day is not a holiday there, but New Year is and once New Year's Eve is over you can find pubs and restaurants taking two or three days off - a hazard for the visitor.

That is isolated Paul. I thought my wife had taken me to all the pubs near Sevenoaks (!) but that looks a bit convoluted to get to. The Woodman must suffer in competition with the nearby Windmill though.

I quite enjoy the brown bitters like Harveys and Otter if well kept (even had an enjoyable Doom Bar recently); but that is a very samey beer range which Burning Sky or Old Dairy would add variety to.

Thanks for the heads up about Christmas in Japan, Ian. Our parent company shuts down for a few days after New Year’s Eve. They also observe another Japanese holiday called “Golden Week”. I think this occurs in springtime; probably to coincide with the cherry blossom, which is rightly celebrated as something of great beauty over there. Unfortunately, for Japanese workers at least, they seem to follow the American custom of not taking the whole of their annual leave allowance.

I agree Martin that the cask beer range at the Woodman isn’t that inspiring, but it was refreshing to note that lager drinkers are being offered something different from the usual line-up of Carling/Fosters/Stella.

Golden Week is around the beginning of May and is so called because usually three public holidays fall in the same week. Japan is long and thin and the cherry blossom 'front' moves north between late March and early May - there are websites which track progress. Early to mid April is about the best time around Tokyo, plus at that time there's still snow in the mountains so it's a good time to visit.

I should add that my wife has been spending half the year working there for the last few years, so I've acquired a bit of 'insider knowledge' through several visits to see her in Tokyo. I haven't learnt much about the beer but the country is a very scenic place to travel around and has a very extensive and easy to use rail network.

Ian, I was fortunate to visit Japan, back in May 2013, and had a really great time. The visit was work-related, but we travelled into central Kyoto, by train, every evening with our Japanese colleagues. We had the weekend free for sight-seeing, and on our last day in the country, my colleague and I took the train out to the town of Nara, to see some of the many fascinating temples situated in the park, which overlooks the town. Despite speaking no Japanese, we found the rail system easy to use and the trains clean, comfortable and reliable. I would certainly go back again, given the chance.