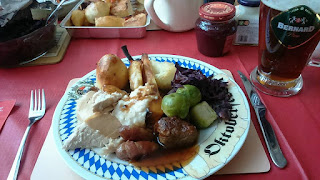 I don’t, as a rule, drink that much beer (or anything else for that matter), on Christmas Day itself. A gargantuan meal sees to that, and this year has proved no exception. We ate quite late; both of us having over-slept, although I was the worst in this respect, having not awoken until just before 10am! Fortunately Eileen was already up and the turkey in the oven by the time I surfaced, and I have next door’s cat to thank for waking me up. To explain, our neighbours are away for Christmas and we are popping round to feed their cat, twice a day. 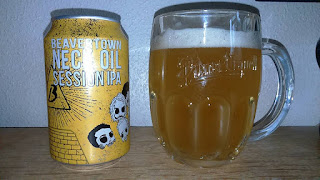 After rushing round in my dressing gown; an unedifying sight for anyone who saw me, it was back for a quick shower and shave, followed by a spot of breakfast. After the present opening and some tidying up, I cracked open my first beer just after one o’clock; quite late for me on Christmas Day! Beavertown Neck Oil Session IPA hit the spot, selected primarily because it was in a can and would therefore cool down quicker. It was one of a number of Beavertown cans bought for me by my son, but it would definitely have benefited from further chilling. 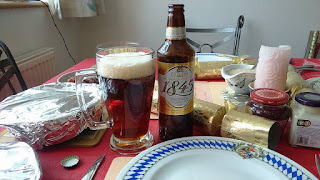 We sat down to our Christmas meal around 2.30pm and as in previous years, Fuller’s 1845 was my beer of choice to accompany the meal. The rich maltiness compliments the turkey in just the right way, and there is sufficient bitterness present to cut through the full flavours associated with such a large roast dinner.

I didn’t have another beer, even though I had a bottle of Westmalle Tripel chilling in the fridge. We had a break before the Christmas pudding and whilst I again had selected a suitable beer to accompany the dessert, (Rochefort 8, 9.2% ABV), in the end I settled for a pot of freshly-brewed coffee! 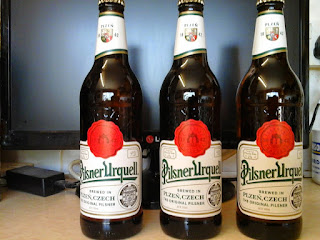 Now, as I write this, I am drinking a tall mug of Pilsner Urquell; sufficiently hoppy to be refreshing, but with a satisfying maltiness always present in the background. This classic Czech pilsner has become my stand-by, go to drink beer at home. It may sound as though a great beer has been debased by being sold cheaply in the major supermarkets, but when I can pick a 500ml bottle up for £1.50 at ASDA, I’m not going to complain.

I don’t normally watch a lot of TV, but I thought I’d better be sociable and keep my wife company, as our son had gone out to see a friend. Fortunately the ghastly OTT soaps had all finished, so there was just a bit of light comedy left to enjoy. I cracked open that bottle of Rochefort 8 I was planning to dink earlier, and very nice it was too, dark and well-rounded and definitely not too sweet. It would have been even better drunk from the correct glass, and I remembered this morning that I have a chalice-style glass lurking at the back of the cupboard. 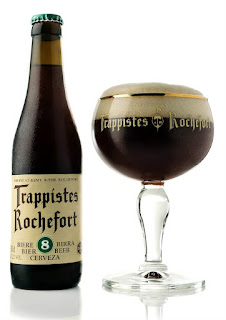 It’s Boxing Day morning now, I didn’t oversleep – although neither Eileen nor I heard our son get up and go off to work! Next door’s moggie has been fed, and I think I can smell bacon sizzling in the pan downstairs. There won’t be any drinking until this evening, as we’re off to visit Eileen’s niece, and this involves a short car journey. If I was on my own, I would walk there, but my immediate family much prefer me to chauffeur them, and I really don’t mind, as long as we find a place to park.

I’m not quite sure which beers to go for tonight, but I’ll make sure there is a decent selection chilling nicely in the fridge before we go.
Posted by Paul Bailey at 10:19