Friday on my Mind 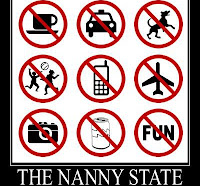 An unholy alliance of health campaigners and anti-drink crusaders are warning that “Mad Friday”; billed as one of the busiest days of the year for UK pubs and clubs, could see alcohol-fuelled emergencies increase by up to 50%.

"Mad Friday" is the nickname for the last Friday before Christmas, and is probably the most popular night for firms' Christmas parties. Consequently it has become one of the busiest nights in the year for ambulances and the police.

My company’s Christmas meal took place last Friday and, whilst a reasonable amount of drink was consumed, people were generally well-behaved and there were none of the embarrassing incidents sometimes associated with firms’ do’s. I strongly suspect most company Christmas parties were similar. People know how to behave, especially when the boss is around, and with many having to drive home afterwards, soft-drinks are often the order of the day.

None of this, of course, prevents the anti-alcohol lobby from trotting out the same tired stories about drunken mayhem on our streets, and government body, Public Health England, has jumped on the band waggon and released a press statement urging people to sign up for “Dry January”.

Dr Yvonne Doyle, from Public Health England said people drinking "much more than usual" over the Christmas period can lead to "the NHS and police dealing with more drinking-related accidents and emergencies". Really??

"It's not surprising that many of us feel ready to take a break from alcohol," she added. "A period of abstinence could help encourage less harmful, better drinking habits in the long-term - even six months later, evidence from Dry January shows that more than two-thirds of participants are still drinking less". Less than when?


"As the festive season continues, we're urging people to take a break and get their 2016 off to a positive start by signing up for Dry January." What's positive about hitting the already beleaguered pub trade at its quietest period of the year?

The statistics put out by PHE fail to stack up, and with no information on the size, scope or range of people questioned, I strongly suspect that, like all such surveys, the whole thing is manipulated to give the answer the group is looking for.

Do they seriously believe that mature adults feel pressurised into drinking more over the festive period? Are people so utterly devoid of free will that they give in to social pressures to drink more than they might otherwise have done?

Apparently, more than half of us (53%) drink alcohol over the Christmas period even when we don’t necessarily want to. Really?

Of those that drink more than they usually do over the festive season, one in four (27%) agree they feel guilty for drinking more and nearly a third (30%) agree that they feel run down as a result of drinking. Some might well feel a bit run down, (and over-consumption of food and lack of exercise probably play an equal role here), but why would they feel guilty? No one forces them to carry on drinking.

One in five (21%) of us are tired of drinking alcohol by Christmas Eve. In other words, the majority of us (four out of five) aren’t! Many of us are still working on Christmas Eve, so where do these figures come from?

Last year’s Friday before Christmas saw sales of alcohol rise in Britain’s pubs, clubs, restaurants and hotels by 142% - and this does not take into account that the majority of alcohol sales are from shops. And???? So according to these health busy-bodies,  people aren’t allowed to spend time socialising and celebrating with friends,  family or colleagues.

The whole thing really is the usual predictable scare-mongering we have come to expect from the likes of Alcohol Concern, but for government-funded organisations to be sticking their oar in as well, seems to me a gross mis-use of public funds.

I strongly suspect that “Mad Friday” like “Black Friday” before it, will be little more than a damp squib. This sort of nonsense may well keep these prod-noses and health fascists in a job, but when my taxes are being used to tell me how to conduct my life, then I am not amused!

You will be pleased to know that the Stockport & South Manchester Branch of CAMRA had a great time last night on the annual Hillgate Stagger, believed to be the longest continuously running CAMRA event in the country.

I suspect daily (or even weekly) drinking guidelines may have been exceeded!

Glad to hear it, Mudge. A friend and I had a “stagger” of our own last night, around a few of Tunbridge Wells’s finest pubs. Several landlords reported an extremely busy Friday night, but all good humoured and no signs of trouble.

Daily guidelines were definitely exceeded! I haven’t had a chance to work out yet whether the weekly limit was exceeded. It may have been in my friends case, as he carried on drinking pints, after I had switched to halves.

“The annual Hillgate Stagger believed to be the longest continuously running CAMRA event in the country.” Glad to see some traditions are still being observed!

Also see retiredmartin's write-up which has now popped up in your blogroll.

Just read it, thanks Mudge. Looked like a really good night out, and I will comment on retiredmartin's blog later. I lived near Stockport, for a short while, back in the late 70’s. I don’t remember that much about the pubs though, mainly because I did most of my drinking in Romiley, where my then girlfriend and I were renting a flat. Mainly Robinsons, of course, with the odd Boddingtons pub thrown in.

Well made points Paul. Apart from a few people worse for wear in Stockport centre at 6pm, all I saw was good behaviour all evening on Mad Friday (and I walked the 2 miles back to the hotel at midnight without seeing any flashing lights).

I won't comment on Mudge's drinking of course, but I reckon 15 units was average (8 pubs, the odd pint, Old Tom at the end). My midnight kebab in Edgeley was the only bad decision of the night !